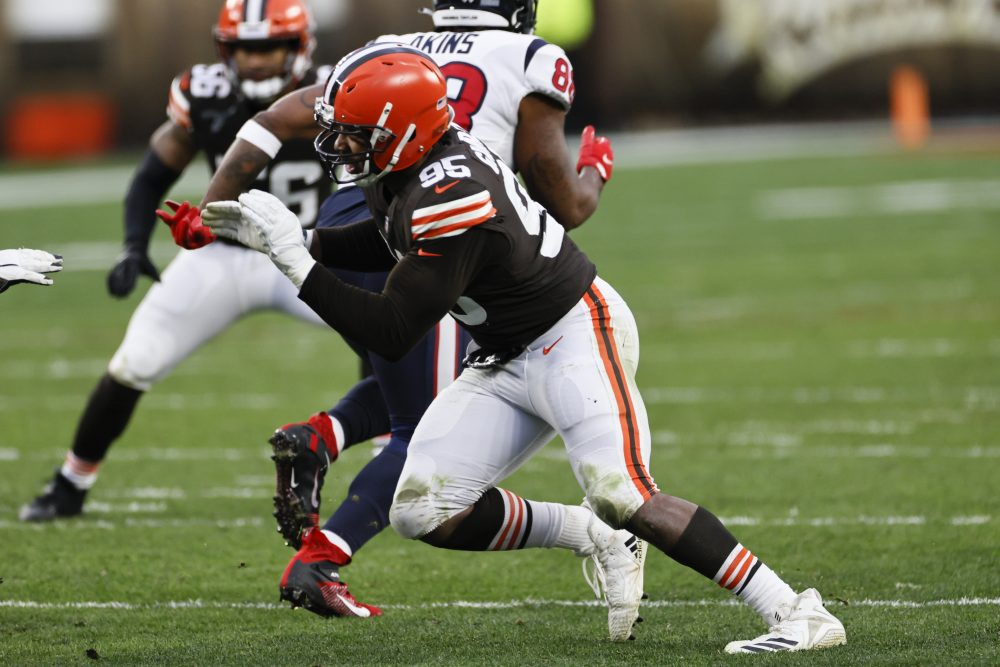 BEREA — Myles Garrett’s quest to be NFL Defensive Player of the Year is on hold.

And the Browns’ road to the playoffs got a whole lot bumpier.

Garrett, the ultra-talented defensive end who leads the NFL with 9.5 sacks, tested positive for COVID-19 on Friday morning and was placed on the COVID-19 reserve list. The team’s best defender won’t play Sunday against the Eagles and has a seemingly slim chance of returning next week to face the Jaguars in Jacksonville.

“It hurts. It’s unfortunate,” defensive line coach Chris Kiffin said. “It’s a weird day when you get the news that one of your leaders, starters, potentially Defensive Player of the Year candidate is not going to be available.”

Garrett stayed home sick Wednesday and Thursday, as required by the league, but continued to test negative and coach Kevin Stefanski said he was scheduled to return to practice Friday. But Garrett couldn’t clear the last hurdle and tested positive.

No close contacts on the team were identified.

“Not the news you want to hear but can’t thank y’all enough for the love,” Garrett posted on Instagram. “This continues to affect us all in so many ways, but we’ll get through it together. Be back soon, Dawg Pound”

Stefanski wouldn’t speculate whether Garrett might be able to return against the Jaguars on Nov. 29 and said he’d have more clarity next week.

The NFL-NFL Players Association protocols contain some ambiguity, but state 10 days must pass after a person who tested positive first reports symptoms, plus 24 hours have passed without a fever, other symptoms have improved and he’s cleared by the team after outside consultation. In addition, players who experienced mild symptoms must complete a minimum three-day exercise protocol before returning to full participation, but that can start during the 10-day window. The timeline is extended for a player with moderate or severe symptoms.

Stefanski said he couldn’t get into specifics about when Garrett first reported symptoms and the clock started toward a return, but even if he recovers quickly, the timeline would be tight to be cleared to play against Jacksonville.

Stefanski again acknowledged Garrett’s immense impact on the team but wanted to keep the focus on winning without him and guys filling the void. Ends Adrian Clayborn and Porter Gustin will rotate at Garrett’s spot, with tackle Sheldon Richardson possibly sliding over to take some snaps outside.

Stefanski took the same approach when receiver Odell Beckham Jr. was lost for the year with a torn anterior cruciate ligament and running back Nick Chubb missed four games with a sprained medial collateral ligament.

“It’s 2020. Expect the unexpected,” Stefanski said. “Whoever’s available, I promise you, will be ready to roll on Sunday, and the guys know that.”

Stefanski said Conklin and Parkey remained on track to be activated Saturday and play Sunday. They must continue to test negative.

Kiffin communicated with Garrett after they got the bad news.

“He texted, ‘Yeah, when I got the news it broke my heart that I wasn’t going to be out there with you guys,’” Kiffin said. “When someone like that who this is all he knows, being out there leading the team, and to take that away from you in a split-second, maybe in a weird way may be a learning lesson for him, just as far as how important it is to him being away, to always stay hungry. He is very upset about it.”

The Browns are 6-3, and Garrett made a game-changing play in all six wins. The Browns will have to find someone else to fill the critical role against the Eagles — and possibly longer — if they want to keep pace in the crowded and competitive AFC playoff race and end a league-high 17-year playoff drought.

Not only does Garrett lead the league in sacks, he’s tied for the lead with four forced fumbles. He played all nine games with 31 tackles, including seven for loss, and 14 quarterback hits.

In addition to his four strip-sacks, he forced Colts quarterback Philip Rivers into an intentional grounding in the end zone for a safety and stopped Texans quarterback Deshaun Watson for a 2-yard loss on fourth-and-goal Sunday in a 10-7 win.

“I was going to send a letter to the NFL to see if we could play with 12 guys to make up for the loss there,” Kiffin joked. “But somebody’s going to have to step up and make a big-time play. As coach said, to win this game we have to win the turnover margin. And Myles has been a big part of us creating turnovers, takeaways.

“We as a defense have not done that the last two weeks, so I know as a whole, our whole unit is excited about getting back out there and trying to get the ball out. And this is an offense that has given the ball up some, so we’re going to attack, we’re going to go after it and try to make that game-changing play.”

Garrett came back motivated this season after being suspended for the final six games last year — the Browns went 2-4 — and signing a five-year, $125 million contract extension in July. He’s on the short list of candidates for Defensive Player of the Year, a goal of his since he was drafted with the No. 1 pick in 2017.

“I would say that he has to definitely be in the conversation with some of the top defensive guys out there,” Eagles coach Doug Pederson said Wednesday. “He is surely making a case for that right now.”