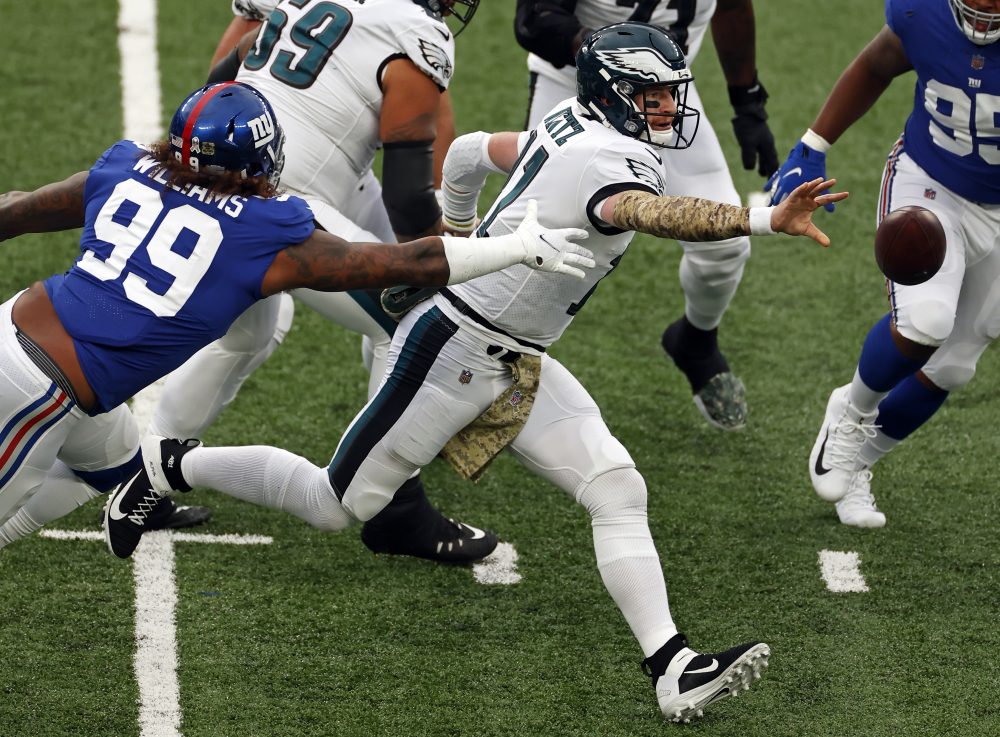 TRYING TO DO TOO MUCH

Carson Wentz is a gamer. He’s also a gambler. He can work magic. He can also mangle.

The fifth-year quarterback once hailed as the franchise’s savior is wearing thin on Eagles fans. He’s thrown a league-high 12 interceptions in the 3-5-1 start, been sacked a league-high 35 times and fumbled a league-high nine times, losing four. The Browns defense should have opportunities for takeaways — it has gone two games without one after 14 in the first seven — but will have to get them without defensive end Myles Garrett, who tested positive for COVID-19 on Friday.

“I just feel like he is trying to do as much as he can for the team in order for those guys to make plays,” defensive coordinator Joe Woods said of Wentz.

“This is an offense that has given the ball up some so we are going to attack,” defensive line coach Chris Kiffin said. “We are going to go after it and try to make that game-changing play.”

Despite the turnovers, 58.2 completion percentage and 73.1 passer rating, Wentz remains dangerous, especially as the Eagles get healthier. He’s 6-foot-5, 237 pounds, doesn’t go down easily, has a huge arm and can run — 206 yards, 20 first downs and five touchdowns. The good Wentz plays like an MVP, the bad one like he belongs on the bench.

“He is a guy who kind of plays the quarterback spot like a linebacker,” linebacker Sione Takitaki said. “He will run and try to run guys over, and he is always trying to make that play for his guys and kind of extend drives, so he is willing to put it out there.”

The Browns can’t put the game on Wentz’s shoulders unless they stop running back Miles Sanders. The 2019 second-round pick out of Penn State is an electric back who missed time with a knee injury but has 519 rushing yards and three touchdowns in six games. Even more impressive is the 6.0-yard average, which ranks third in the NFL behind Cardinals quarterback Kyler Murray (6.7) and Browns running back Nick Chubb (6.1). Sanders returned last week after almost a month and carried 15 times for 85 yards against the Giants.

“A lot of danger,” Woods said. “Growing up, you always had a couple of kids in the neighborhood that could just juke you and it was hard to get them down. I look at him, and he is a daylight runner. He sees daylight, he is running from opposite color jerseys and he is very slippery, very quick.”

The forecast calls for rain throughout the game, but with only 10 mph winds, so the run game will be key. The Browns run defense has been good overall — eighth in the league at 104.9 yards a game — but gave up 208 in a loss to the Raiders on Nov. 1 when weather was an issue and Garrett was limited by a knee injury. It can’t have a repeat performance and let Sanders control the game and make life easy for Wentz. Sanders rushed 11 times for 80 yards and two touchdowns against the Steelers and nine times for 118 against the Ravens.

“This is a team that is going to try to establish the run in the first quarter,” Kiffin said. “If you take it away from them, then they tend to lean on their pass game. We work all week as coaches on scheme and try to find an edge in that regard to be able to stop the run.”

Wentz and Baker Mayfield have struggled under pressure and both teams have high-priced defensive lines, so the game could come down to which offensive line holds up.

The Browns seemingly have the advantage with strong performers at each spot and a league-best 88.2 pass-blocking grade from Pro Football Focus. But PFF ranks the Eagles defense second with a 41.3 percent pressure rate. So the Browns will have to live up to their billing, especially with right guard Wyatt Teller dealing with a sore calf and having to battle five-time Pro Bowl defensive tackle Fletcher Cox. Mayfield has been sacked only 12 times, but the Eagles have taken down quarterbacks 31 times, third in the league.

“They are so aggressive,” coach Kevin Stefanski said. “They pin their ears back and they are flying off the ball, defeating one-on-one blocks.”

Defensive end Brandon Graham leads the Eagles with seven sacks and will be matched up against right tackle Jack Conklin, who missed the practice week on the COVID-19 reserve list after being a high-risk close contact.

“He is definitely a guy that you are aware of, and I feel like we match up well,” offensive coordinator Alex Van Pelt said. “I think Jack will do a great job.”

The Eagles offensive line has been beset with injuries but continues to get pieces back. That doesn’t necessarily matter with Wentz holding the ball forever, but the Eagles get a huge break with Garrett out of action. He has 9.5 of the Browns’ 22 sacks, so someone, or someones, will have to step up and get to Wentz. Woods will try to help by dialing up some well-timed blitzes.

“Bottom line is you have to affect the quarterback, regardless of the call,” Stefanski said.

Third downs converted, in nine attempts, by the Eagles last week in a 27-17 loss to the Giants.

The game was always going to be decided by the number of Carson Wentz turnovers. The rain helps make up for the loss of Myles Garrett and keeps the odds in Cleveland’s favor.

Commentary: The plan for the rest of the season should be clear … keep giving the ball to Nick Chubb and Kareem Hunt
Commentary: Kevin Stefanski keeps his head, proves plenty in a challenge-filled season unlike any other