Commentary: Kevin Stefanski keeps his head, proves plenty in a challenge-filled season unlike any other 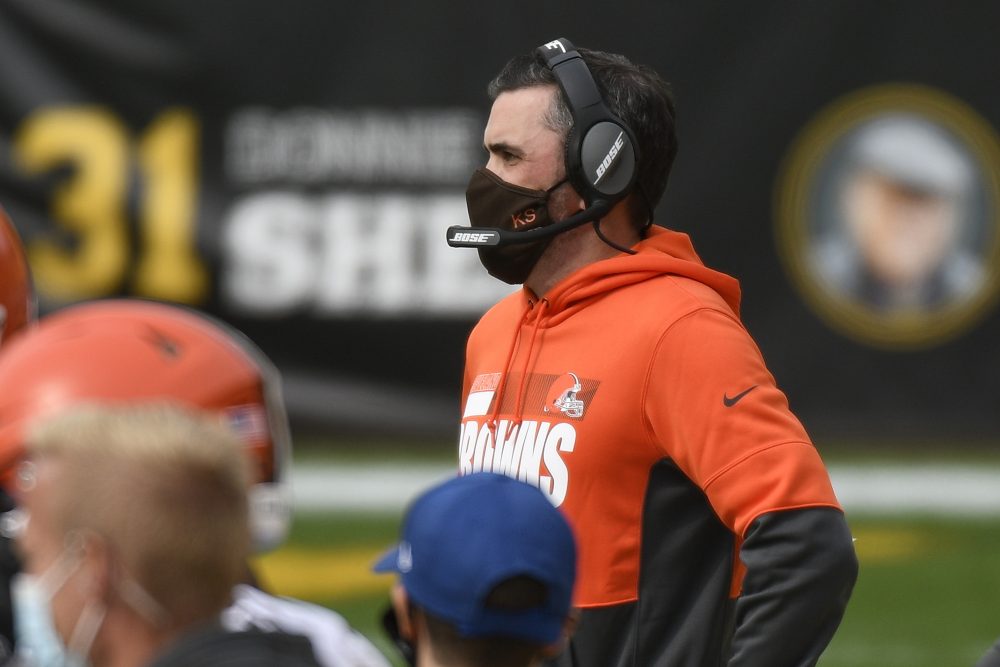 Welcome to the next chapter of “Kevin Stefanski: What In The World Was I Thinking When I Took This Job?” starring Kevin Stefanski.

Rookie mistake, or just a vicious blindside sack by the football gods? Whatever it is, Stefanski isn’t having much Stefunski. If you think he is, then your idea of a good time is walking an NFL sideline dressed like a bank robber.

Stefanski didn’t sign up for any of this, except that he did. He signed up for all of this, and Sunday at FirstEnergy Stadium he will attempt to orchestrate his way around still more of this.

Because, if nothing else, the Browns lead the league in “this.”

They are 6-3, and — (gulp!) let’s just throw it out there — heading for the playoffs. But for now, let’s concentrate on exactly what Stefanski has had to deal with so far to get this far, which is this:

A pandemic. Not huddle-wide, worldwide. Vince Lombardi, Don Shula, Hue Jackson and Freddie Kitchens never had to head coach their way through a pandemic. Kevin Stefanski has — and still is.

Because of the pandemic, there were no normal training camps in the NFL this year. That’s not so bad for, say, Andy Reid, head coach of the Super Bowl champion Kansas City Chiefs, whose quarterback, Pat Mahomes, is the LeBron James of quarterbacks.

But for Stefanski — who still may not even know where his parking spot is at “The Building” — not having a normal training camp in his first year on the job comes dangerously close to insuring you won’t have a second year on the job.

There were also no preseason games. That’s probably not a big deal for a coach who had, you know, actually seen his team play in person prior to this year. But Stefanski isn’t one of those coaches.

Then the regular season started, with injuries to key players and other stuff nipping at its heels.

In the middle of a crowded playoff race, Browns determined to keep focus on task at hand

Odell Beckham Jr. blew out his knee before he even had time to throw his first sideline tantrum. He’s missed two full games so far, and he’ll miss all of the Browns’ seven remaining regular-season games, plus any potential playoff games.

Nick Chubb had a knee injury that caused him to miss four games. Myles Garrett (positive COVID test) will miss Sunday’s game, and probably the next one, as well.

Guard Wyatt Teller, who is playing at a Pro Bowl level, missed three games and is questionable for Sunday’s with a strained calf, an injury that is notorious for its nagging-ness.

In a wobbly defensive backfield, cornerback Greedy Williams and safety Grant Delpit haven’t played a down this year due to injuries.

I know, all teams have injuries. But all teams that have injuries don’t have first-year head coaches, who hadn’t met face-to-face with his players until (almost) the start of the season.

Then there was tight end/confirmed enigma David Njoku, who asked to be traded, then said never mind, then returned to his alternating role as great-catch maker and ball-dropping aggravator.

The Browns’ linebackers all seem to be in the witness protection program, but one who caught Dawg Pound eyes was Mack Wilson who, of course, is also injured.

Stefanski was also faced with the challenge of being a rookie head coach as America’s social justice issue bubbled to the forefront, with athletes becoming more active than ever before. To his credit, Stefanski stood shoulder to shoulder with his.

That gets us through the first half of the new coach’s first year, and we haven’t even gotten to the games yet.

Let’s get to them.

The season began in Baltimore with a loss and team performance (players and coaches) so gruesome that it could have passed as one from the dusty, leftover Kitchens or Jackson files.

The Browns lost 38-6, and it wasn’t that close. From the Browns’ side, it was barely football. But in what might turn out to be one of the most important four-game stretches of Stefanski’s career, the Browns rallied to win their next four.

In their last two home games, played in the kind of weather — memo to the new coach: The hard stuff won’t be here for another month — that caused Dorothy to grab Toto, pedal back to the farm and head down into the storm cellar, the new coach learned the importance of taking the wind at winning time.

Meanwhile, somewhere over the rainbow, the playoffs beckon.

Quick, somebody ask him how he likes the job so far.