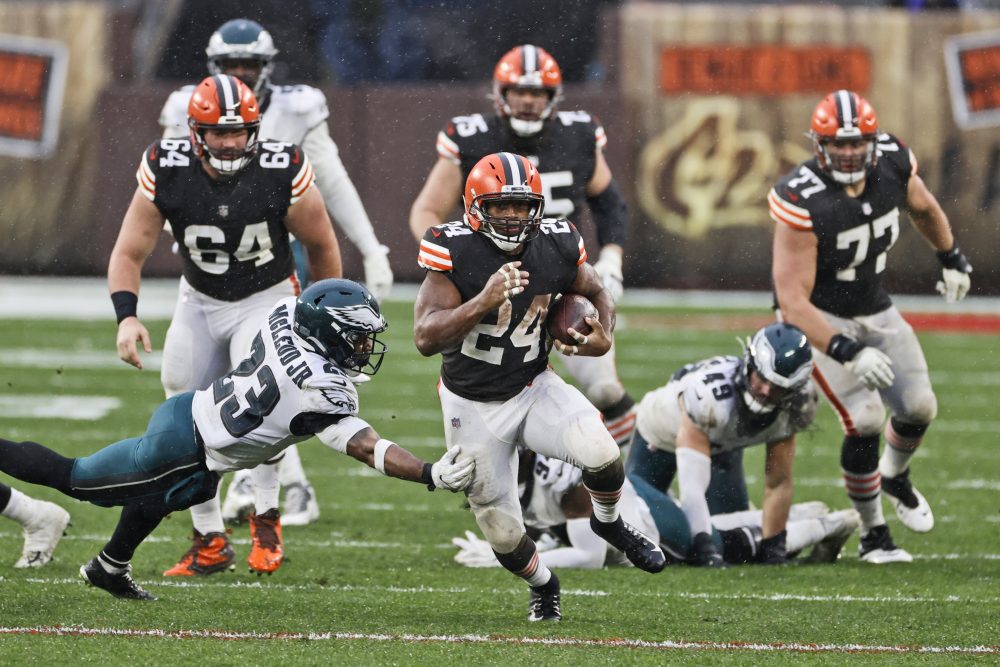 Commit to the run and wear down the defense.

It’s an old adage that gets recycled over and over. But this Cleveland Browns team takes it to heart.

The Browns rushing attack was non-existent for three quarters Sunday, but they didn’t waiver, piling up 86 yards in the fourth quarter to close out Philadelphia 22-17 at FirstEnergy Stadium.

“That is our identity,” said running back Nick Chubb, who led the team with 114 yards. “We know it is going to be tough when everyone knows we are a running team for the most part. I think (quarterback) Baker (Mayfield) and the receivers definitely help us out a lot. When we needed one of those guys to make a play, they made it.”


Philadelphia kept the dynamic duo of Chubb and Kareem Hunt bottled up for three quarters as they, along with Mayfield, combined for just 18 first-half yards. The Browns even got crafty in the third quarter, enlisting receiver Jarvis Landry on an inside handoff. He picked up the first down on third-and-1, then pitched to Chubb to complete the 5-yard gain.

Hunt, who entered Sunday averaging 4.7 yards per carry, only had 2 yards at halftime and at one point in the third had a negative total. Chubb only managed 15 yards on seven carries in the first half and Mayfield chipped in 1 yard on two attempts.

“I think we kind of unlocked it a little bit there at the end and were able to get some hard yards. Not going to be easy versus that front.”

But the Eagles showed signs of wearing down as they approached the fourth quarter, as the Browns managed 27 yards on the final three plays of the third quarter — more than double their total to that point. Cleveland kept going all-in on the run, and continued to be rewarded with double the rewards. It finished with 137 yards and a touchdown after rushing for just 51 in the first three quarters.

The one-two punch finally landed in the fourth.

Chubb ran up the middle, where defensive tackle Joe Ostman had the lane bottled up pretty well, but apparently not well enough to stop Chubb. The running back threw him to the ground with a stiff-arm and burst free for 54 yards.

“It felt good,” Chubb said of the run. “That is what we are about. We keep plugging, we keep plugging and keep hitting it. We know one is going to come sooner or later, and it came at a perfect time.”

Tackling @nickchubb21 is hard, we get it.

Not to be outdone, Hunt relieved Chubb in the red zone and delivered the knockout blow, a 5-yard touchdown run. He took the ball outside, looked to be bottled up by Darius Slay and Jalen Mills but leaped over Mills into the end zone.

Hunt had what looked to be a 1-yard touchdown in the first quarter, but replay showed his elbow was down before the ball broke the goal line, giving the ball to the Eagles on downs.

“It was like he never stops going up,” Mayfield said of the touchdown. “I mean, he jumped and just kept levitating. It is like a Super Mario double-bounce. I don’t know.”

RB @Kareemhunt7 just walked on air into the end zone 🤯