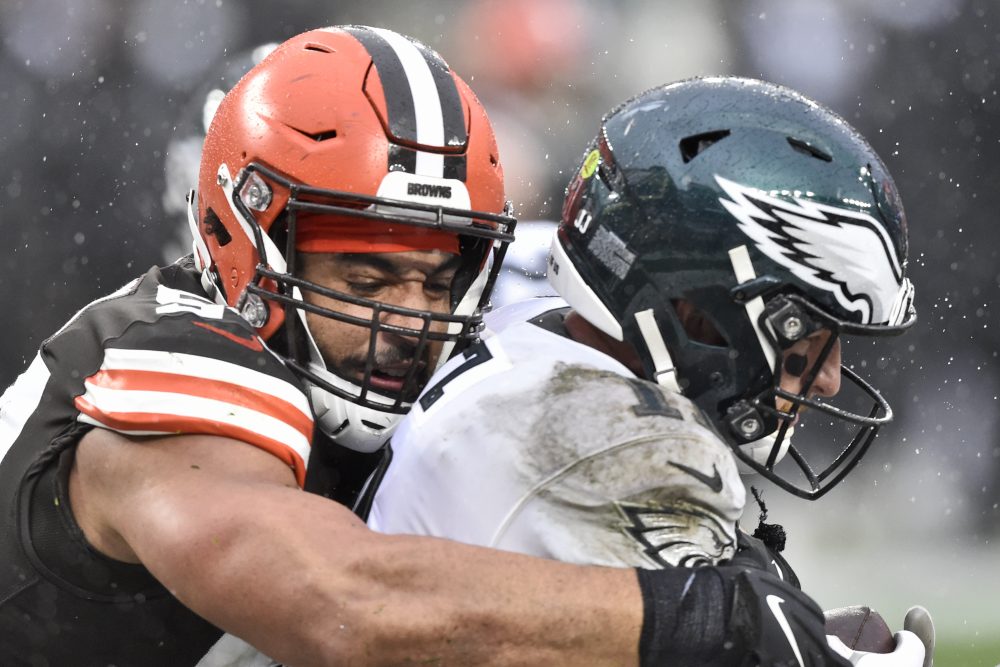 CLEVELAND — The 2019 season was one to forget for the Browns and their fans.

Vernon continues to be bothered and driven by the huge letdown and unfulfilled potential of the 6-10 season that started with Super Bowl talk and ended with coach Freddie Kitchens fired and general manager John Dorsey leaving after he declined to take a reduced role.

Vernon believes the Browns had enough talent to reach the postseason a year ago. He’s right.

He feels the same now — he’s right again — and proved without a doubt Sunday he’s part of that large pool.

With defensive end Myles Garrett, a leading candidate to be the NFL’s Defensive Player of the Year, out after testing positive for COVID-19 on Friday, Vernon played his best game with the Browns, and possibly of his career. It couldn’t have come at a better time, as the Browns needed the victory over the struggling Eagles to gain a bit of separation in the contested AFC playoff chase.

They got it, 22-17 behind an inspired and unexpected performance from the defense. When the rain finally stopped coming down, and the lights were turned off at FirstEnergy Stadium, the Browns were 7-3 and holding a wild card spot.

They couldn’t have done it without Vernon. His breakthrough came after most of his two years with the Browns had been spent underachieving or injured.

He had three of the team’s five sacks, including burying Carson Wentz in the east end zone for a safety in the third quarter. Vernon wasn’t alone, but he stood out in proving the defense isn’t a one-man show. It can harass quarterbacks and rack up takeaways without Garrett.

“At the end of the day, I saw this team had a lot of potential,” Vernon said of his return this season on a restructured contract. “How everything unfolded last year, it did not really go our way. We had too much talent, and we wasted last year.

Vernon’s return wasn’t assured. He was due a non-guaranteed $15.25 million salary in 2020, the final year of his contract, but had only 3.5 sacks last year and missed six games at the end with a knee injury.

The Browns flirted with Jadeveon Clowney and other pass-rushing options in the offseason but decided to bring back Vernon as long as he agreed to take a pay cut to $11 million guaranteed. He wasn’t likely to get that money elsewhere but also liked the Browns’ chances.

“It was big that we got a big win, a big W against a good opponent,” he said. “We are just trying to get it on a roll.”

When news broke that Garrett would miss his first game of the season, a question begged to be answered: Can the Browns replace his playmaking ability?

After all, he had a game-changing play in each of the first six wins, including four strip-sacks. A defense so reliant on takeaways was missing its turnover machine.

The answer to the question was: Yes, with everyone chipping in.

Sione Takitaki gets pivotal pick-6 with assist from Denzel Ward

Second-year linebacker Sione Takitaki made the first memorable play of his career, returning an interception 50 yards for a touchdown and 7-0 lead. The pickin’ was easy because cornerback Denzel Ward blitzed off the left edge and hit Wentz as he threw, causing the ball to float to Takitaki.

Vernon had the three sacks, the safety, five tackles, three tackles for loss and a pass defensed. Ward had an interception and four passes defensed. End Adrian Clayborn had 1.5 sacks and a forced fumble. And end Cameron Malveaux, elevated from the practice squad Saturday, forced a fumble inside Cleveland’s 5-yard line to keep the Eagles from taking a lead in the first quarter.

“With Myles out, we were counting on those guys to step up,” coach Kevin Stefanski said. “OV, he did it today. He was defeating his blockers in the run game. He was getting to the quarterback.

.@oliviervernon54 sacks Wentz in the end zone for the SAFETY 🙏

Stefanski, who continues to impress in his first year on the job, set the tone for the team Friday when he refused to spend much time on the magnitude of the loss of Garrett. He conceded nothing, and his players followed.

Garrett is great. But he’s only one man.

The defensive line is supposed to be the strength of the defense, and not just because of Garrett. Vernon, Clayborn and tackles Sheldon Richardson and Larry Ogunjobi have had success in the past, even if they hadn’t dominated as hoped this year.

Whether the rest of the linemen played their best in tribute to Garrett or because they felt underappreciated doesn’t matter. They drove the Browns to a win that looks huge as Thanksgiving arrives. A loss wouldn’t have been the end of the world, but a win keeps the train rolling.

Next stop: Jacksonville on Sunday, where the 1-9 Jaguars await.

Vernon can be streaky and moody, but he’s intelligent and opinionated. When he talked before the season, he mentioned a lack of maturity as a significant problem last season.

Stefanski has helped fix that. The Browns, for the most part, play with discipline and focus. They’ve shown time and again they’re gritty and resilient.

On Sunday, Vernon was Exhibit A. He was limited early in the year with abdomen and groin issues but started to feel better and showed it with his first two sacks of the year Nov. 1 in a loss to the Raiders. He’s getting healthy and hot at the right time.

“Yeah, I feel a whole lot better,” he said. “I am glad that the majority of our team is pretty healthy. That is what you need, especially coming towards the end of the line with the season and trying to make a run for the playoffs.”

Commentary: Kevin Stefanski keeps his head, proves plenty in a challenge-filled season unlike any other
Commentary: Baker Mayfield hasn’t thrown a ton lately, but he’s having fun collecting wins and talking after them