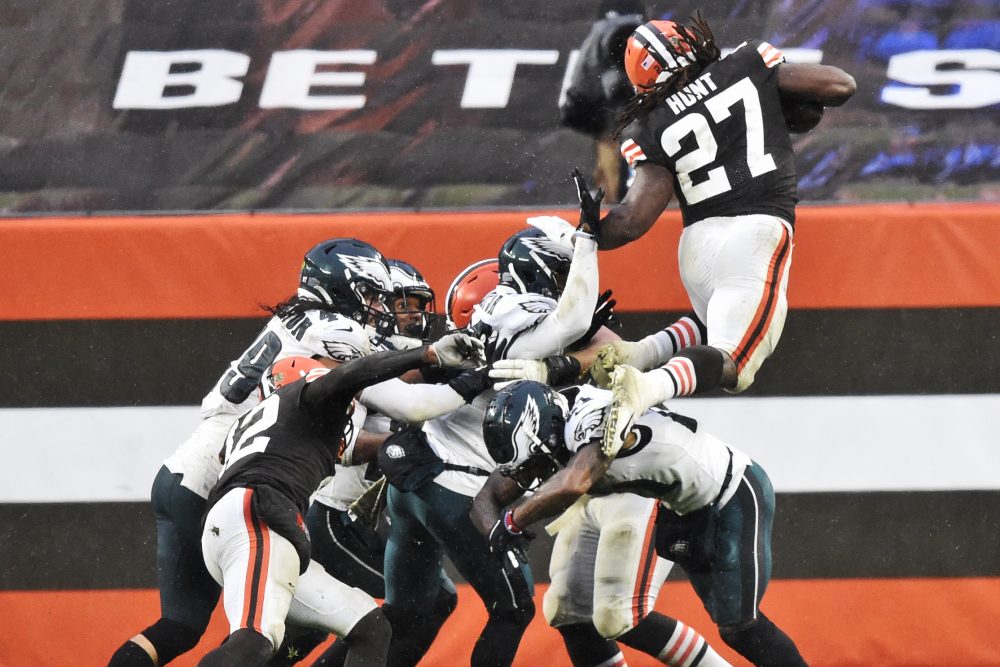 CLEVELAND — This had all the makings of a lost weekend.

The week was dominated by COVID-19 news, with the worst of it coming Friday when game-changing defensive end Myles Garrett tested positive and was ruled out for the game Sunday against the Eagles.

The normally dominant run game was neutralized for three quarters. Quarterback Baker Mayfield missed a couple of early throws into the end zone. A touchdown was taken off the board after a replay review. The rain never let up.

Neither did the Browns.

They continued to show grit and determination, outlasting the Eagles 22-17 at FirstEnergy Stadium.

“We all missed Myles. We wish he could have been out here playing,” said defensive end Olivier Vernon, who had three sacks. “At the end of the day, everybody played as a team, made the stops when we had to and made the big plays when we had to. I am glad we are sitting at 7-3 right now.”

The victory over the Eagles (3-6-1) was all about adjustments. The offensive coaches tinkered with formations and personnel until the run game finally got going. On defense, the coaches and players figured out a way to shut down running back Miles Sanders after a hot start.

The most important adjustment was thriving without Garrett.

The defense showed it isn’t a one-man operation, keeping the Eagles running game in check, taking advantage of quarterback Carson Wentz’s tendency to hold the ball too long and make bad decisions and totaling three takeaways after two games without one.

Vernon had three of the Browns’ five sacks, including one in the end zone for a safety in the third quarter that provided a 12-7 lead. Vernon had two sacks on the season, both Nov. 1 in a loss to the Raiders.

“I’m smiling and crying,” Garrett tweeted in the fourth quarter. “I’m so proud of the DL”

“My dawgs balled out today,” he tweeted after the win.

The weather has been a factor in the last three games, all on the lakefront, as the defense has allowed only 40 points, including seven by the Eagles with 30 seconds left. Regardless of conditions, the defense has made significant strides, and proved it further by winning without Garrett. The big plays were everywhere.

Linebacker Sione Takitaki made by far the best play of his two-year career with a 50-yard interception return for a touchdown. With Vernon’s safety, that was nine points for the defense. Takitaki accounted for the only points of the first half.

Cornerback Denzel Ward hesitated for a beat, then blitzed off the left edge and hit Wentz as he was throwing a swing pass to Sanders. The ball floated, Takitaki grabbed it and was gone.

“It was a great feeling — a feeling you want to feel every time you step on that field,” he said.

Coach Kevin Stefanski had chosen Takitaki as the game captain.

“The reason for that is he is as tough as they come,” said Stefanski, who continues to push almost all the right buttons. “He plays through injuries and he just does his job. He plays his role, he plays it hard. He brings a physicality to our team.

“To see him make a play on the ball and go score was incredible. So proud of him.”

Ward added a fourth-quarter interception and four passes defensed. End Adrian Clayborn took advantage of the increase in playing time he’s wanted with 1.5 sacks and a forced fumble. End Cameron Malveaux, elevated from the practice squad Saturday, forced a fumble inside Cleveland’s 5-yard line in the first quarter that was recovered by safety Karl Joseph to keep it scoreless.

“Obviously that is not a one-man job to fill those shoes. I know that is probably the most cliché thing, but it is just the truth,” Mayfield said of Garrett. “We had a ton of guys step up. When they knew that Myles was out, they knew they had to get funky on the field, and just like an old batch of collard greens, they just played well together.”

Mayfield was quoting a Snoop Dogg song, continuing his postgame pattern of borrowing from a song or movie to describe the action or a teammate.

The outcome was in doubt until the run game got going in the fourth quarter.

Nick Chubb eclipsed his total for the first three quarters with a 54-yard run after the Eagles had cut the lead to 12-10 with 11:24 left. Chubb made a cut near the line of scrimmage, then threw aside defensive end Joe Ostman with a vicious stiff arm.

Kareem Hunt finished the drive with a 5-yard touchdown in which he stepped out of a tackle, then hurdled safety Jalen Mills, appearing to fly into the end zone. Mayfield said looked like a “Super Mario double bounce.”

“We have the best backfield in the league. There is no question,” Mayfield said. “Those guys are top five backs each, and they are something special.”

Chubb finished with 20 carries for 114 yards. Hunt was held to 11 yards and a touchdown on 13 carries, as the Eagles were devoted to stopping the run.

Mayfield went 12-for-22 for 204 yards and an 86.2 passer rating. He didn’t throw an interception for the third straight game but lost a fumble. He keeps handing off and stacking up the wins.

Sanders got off to a fast start, rushing for 64 yards on his first 10 carries, including three 11-yarders. He finished with 16 carries for 66 yards.

Wentz was 21-for-35 for 235 yards, two touchdowns, two interceptions and a 75.3 rating. Coach Doug Pederson was asked about benching him after the game but said Wentz remains the starter.

The Eagles are still in first place in the awful NFC East, while the Browns passed the Ravens (6-4) and Dolphins (6-4) in the AFC playoff hunt.

“We are worried about the singular focus,” Mayfield said. “A win is a win. We will take it, no matter or however we get there.

“You might call it ugly, but Coach Stefanski called it beautiful after the game. Complementary ball is what we did to accomplish that win today.”

Wyatt Teller, Mack Wilson active for today’s game vs. Eagles
Myles Garrett ruled out for game vs. Jaguars, will remain on COVID-19 list