Mailbag: Will Andrew Berry sign Nick Chubb to a long-term deal? Where should the offseason fix of the defense start? 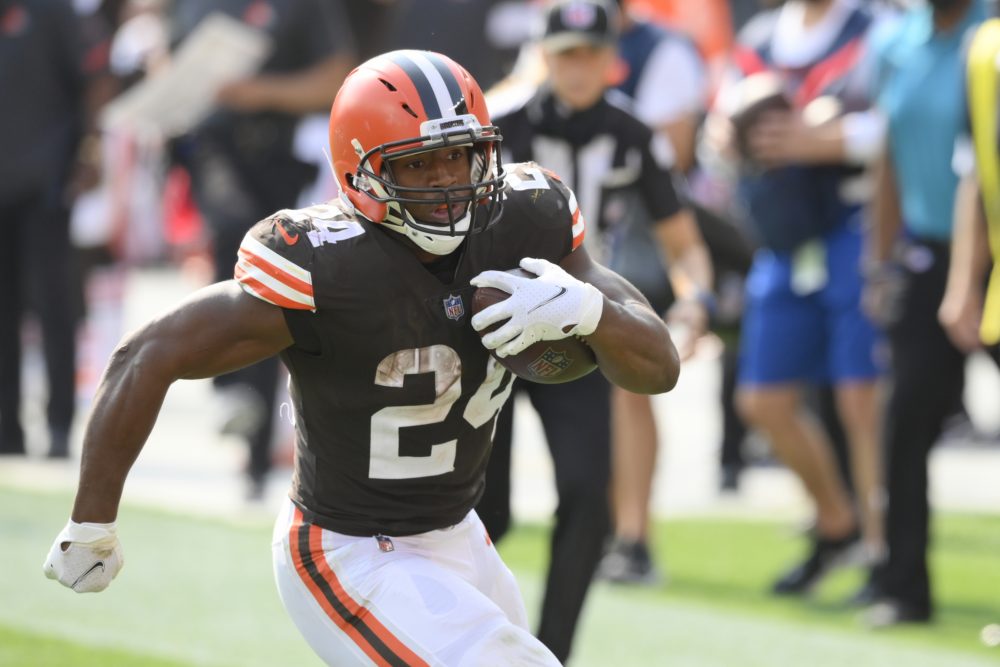 Q: Will the Browns commit long term to Nick Chubb? We fans have watched helplessly for years as the Browns fumble their attempts to build a winning culture. Chubb is one of those rare people whose actions speak louder than words and reinforces to every athlete on the team the tough, smart, accountable culture Andrew Berry is trying to build. My understanding is the analytics playbook says not to pay top dollar to a running back, but if you add a column to that spreadsheet called “heart,” doesn’t Nick Chubb get a perfect score?

A: This question seems especially appropriate after Chubb’s selfless decision to step out of bounds at the 1-yard line last week, ensuring victory over the Texans rather than adding a touchdown to his stat sheet. The move drew national attention, but anyone who’s been watching Chubb for the last three years, like yourself, already knew Chubb always puts the team first.

The fear from some fans, including yourself, is that Berry will pull a Kevin Cash — the Tampa Bay Rays manager — and listen only to the analytics. I believe if Berry did that, he wouldn’t sign Chubb to a long-term deal, because the best management of the salary cap doesn’t include the approximately $15 million a year it would take to keep him. Plus the Browns have Kareem Hunt under contract through 2022 at a good price.

But I feel Chubb should be an exception to the analytics rules. And I don’t think that’s bad business or being emotional. You’re exactly right about culture, and the best players who embody the desired culture should be rewarded. It sends the message to the rest of the team that the right behavior will be recognized and appreciated.

I think it will be a tough decision for Berry and chief strategy officer Paul DePodesta. I think they could try to find a compromise by keeping Chubb on the franchise tag — big money without the long-term commitment. But I believe Berry is flexible enough to make an exception and sign Chubb to the long-term deal he deserves.

Q:
The Browns devoted this past offseason to the creation of a playoff-caliber offense. With the possible exception of dynamic QB play, they were successful. Do you see a similar effort this offseason to fix the defense? What positions would you target?

A: I definitely do. Without getting into quarterback, adding a young receiver is the only significant move necessary on offense. That leaves Berry plenty of time and resources to focus on rebuilding/overhauling the defense.

The first move should be finding a defensive end to pair with Myles Garrett. Olivier Vernon has the chance to live up to his $11 million contract over the final seven games, including today against the Eagles with Garrett out after testing positive for COVID-19, but he hasn’t come close to doing it through nine games. Garrett has still been able to make a series of game-changing plays, but just imagine what the pass rush would look like with a second stud that kept opposing coaches up at night.

After end, I would look at cornerback. The Browns just don’t have enough information on Greedy Williams to commit to him as the starter opposite Denzel Ward, especially when he hasn’t played a snap this season due to a tricky nerve injury in his shoulder. Terrance Mitchell has held up well in place of Williams but is 28 years old and a free agent after this year. Berry should find a young corner to at least compete with Williams.

I’m trusting Grant Delpit to return from the torn Achilles tendon and pair with Ronnie Harrison as the starting safeties. That leaves the linebackers, which need an upgrade. The Browns have young bodies in Mack Wilson, Jacob Phillips and Sione Takitaki, but none has proved anything at this level. So a playmaker in the middle of the defense would be the final piece.

Q: I know the oft-stated remark regarding Andrew Berry’s reluctance to improve the LB corps is that he doesn’t see it as a critical position. Does anyone know his stance on the QB position? I think Baker is a “C+.” Would AB accept that long term or are we headed for another new QB?

A: I think Berry’s been clear that he places the ultimate importance on the QB position. He realizes it’s the most important position in the game, and he’s talked often about the need to surround the quarterback with as much talent and quality coaching as possible to help him succeed. I think it would be difficult in today’s NFL to find a GM who didn’t agree. And if you found one or two who didn’t prioritize quarterback, he wouldn’t be in the job long.

The second part of your question is tougher to answer. I could see Berry sticking with a C+ quarterback for a year or two with the hope he turns into a solid B+. But if Berry believed Mayfield’s ceiling was a B or B-, I think he would be aggressive in looking for an upgrade. Berry has seven games — maybe more with the playoffs — before he has to begin to make any decision about Mayfield. I’m sure he’s hoping for more clarity.

Q: With the 20th pick in the 2021 NFL Draft, the Cleveland Browns select Kyle Trask, QB, Florida!!! Your thoughts?

A: My first thought: I would have an awfully lot to write.

It’s not crazy to consider a quarterback — depending on how Mayfield performs over the rest of the season.

If Mayfield is going to be replaced, or at least challenged, I like the idea of a young quarterback rather than a retread. Although this offseason could feature some interesting intermediate options, including Sam Darnold.

Mayfield would immediately ask for a trade, and the offseason would get really interesting.

Would Trask be around at No. 21? If he is, does that mean he’s not really elite and not necessarily an upgrade over Mayfield? I haven’t watched enough of him to have an opinion on that. But there’s no way the Browns would draft him if they didn’t see him as the long-term answer.

My final thought: I expect Mayfield to play well the rest of the season and the Browns to pick up the fifth-year option on his rookie contract. That would eliminate the chance of drafting Trask. But on Nov. 22, I can’t rule out the possibility.

Mailbag: What does Baker Mayfield have to do in 2nd half to solidify future with Browns? Would front office consider 9-7 and no playoffs a success? Can rookie Jacob Phillips save the LBs?
Mailbag: Is this the year for a playoff appearance? Why aren’t the RBs a bigger part of passing game? Could a TE help out at DE?