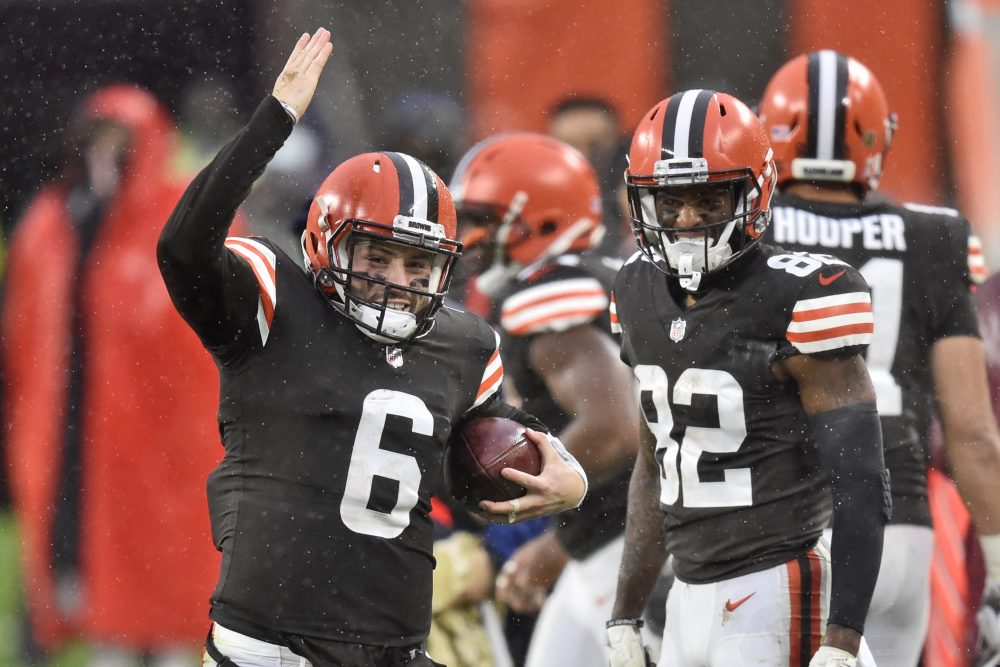 CLEVELAND — Baker Mayfield must be looking forward to getting to sunny Jacksonville, Fla.

For the third straight game, all at FirstEnergy Stadium, the weather made throwing tough. After two games with blustery winds, the 22-17 win Sunday against the Eagles featured a persistent rain that started before kickoff and never stopped.

The Browns play the Jaguars (1-9) next Sunday.

“Normally, it is really not too bad in the rain games because you are able to sub the ball in and out, but there were a few times where it was just sitting there in the rain and it got pretty wet,” Mayfield said. “No excuses, but still, it is pretty tough to throw a soaking wet ball.”

Coach and play caller Kevin Stefanski didn’t abandon the pass, but the Browns finished with 40 rushes and 22 passes. Mayfield went 12-for-22 for 204 yards, three sacks and an 86.2 rating.

He’s gone three straight games without a touchdown or interception but lost a fumble on a strip-sack Sunday. Three games without a pick matched a career high set last year.

The touchdown drought is unusual for Mayfield. He had a rookie-record 27 TD passes in 2018 and entered this season with only two starts without a touchdown pass. He threw 15 touchdowns and seven interceptions in the first seven games.

“Whatever it takes to win, I don’t care if that’s handing the ball off every single time,” Mayfield said. “We are happy to go 1-0 each week. We have two great backs.”

Many of Mayfield’s throws came off play-action, and he was able to find receiver KhaDarel Hodge in single coverage outside. Hodge set career highs with three catches for a team-high 73 yards, including a career-long 42-yarder.

“It is huge for us just to be able to keep defenses on their toes and just all of those were off play-action shots,” Mayfield said of his deep throws, including a 43-yarder to Rashard Higgins. “We are making stuff look similar to run and pass. These guys are doing a good job of just securing the ball for us in these weather games. It is a huge part of our offense.”

Mayfield won his 13th home game, tying Bernie Kosar for the most by a Browns quarterback in his first three years since the 1970 merger.

Mayfield was mad at himself for a couple of missed throws early into the end zone. He underthrew tight end Harrison Bryant but was bailed out by a pass interference penalty. He then overthrew wide-open tight end Austin Hooper on a possession that ended with Kareem Hunt tackled just short of the goal line.

“There are definitely a few plays that I would love to have back today — there is no doubt about that — but we have consistently for the most part taken care of the ball in these bad-weather games,” Mayfield said. “That is the key to winning those.”

Strong safety Ronnie Harrison, who had taken over the starting role and begun to emerge as one of the defense’s best players, left the game in the first half with a knee injury. Stefanski said he’d have an MRI on Monday.

Harrison was hurt on the Eagles’ second offensive play. He was examined in the medical tent and went to the locker room but returned to play. He left for good early in the second quarter after giving up a 32-yard completion to tight end Dallas Goedert.

** Stefanski said Harrison’s was the only injury of note.

** Running back Nick Chubb lost a contact lens and missed part of the first quarter.

Defensive Olivier Vernon’s primary concern when he heard defensive end Myles Garrett tested positive for COVID-19 on Friday was that his teammate was taking care of himself.

“I sent him a text to get right,” Vernon said. “I had somebody close at home that caught COVID, so I know how serious it is. I just shot him a text, ‘Keep your head up and try to get better.’

“This thing is not anything to play around with for anybody to get.”

Garrett thanked the fans for their support Friday on Instagram and tweeted congratulations to teammates Sunday.

** Right tackle Jack Conklin and kicker Cody Parkey played after being activated Saturday from the COVID-19 reserve list. They went on the list Wednesday after being close contacts of someone who tested positive and didn’t practice.

Parkey made 46- and 28-yard field goals and two extra points. He had a 47-yard field goal blocked when Derek Barnett pushed back Wyatt Teller on the left side of the line.

Stefanski had never been a head coach at any level but entered special company with the 5-1 start at home. The only other Browns coach to start 5-1 was Paul Brown in the team’s inaugural season of 1946.

Right guard Teller (calf) and linebacker Mack Wilson (hip) were active and started after being listed as questionable on the official injury report Friday.

The Browns didn’t have any surprises on the inactives list.

Porter Gustin started in place of Garrett, with Adrian Clayborn rotating in.

Cameron Malveaux, elevated from the practice squad Saturday, was picked as the fourth end over Joe Jackson and got his first career forced fumble.

** After Kendall Lamm practiced as the starting right tackle all week with Conklin gone, the coaches used him as an extra lineman on a few snaps.

The Browns joined the 1997 Chiefs, 1996 Giants and 1947 Steelers as the only teams with a pick-six and a safety in multiple games in the same season.

Notes: Adrian Clayborn has been looking for more playing time and will get it with Myles Garrett sidelined
Notes: Denzel Ward reports calf injury Monday after great performance Sunday