Sione Takitaki gets pivotal pick-6 with assist from Denzel Ward 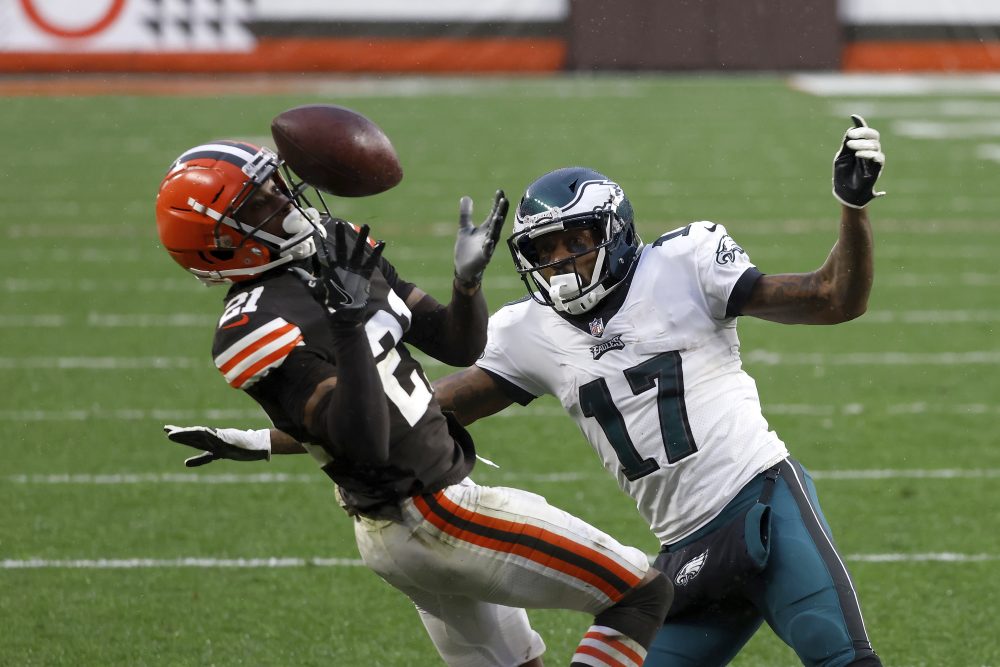 With Myles Garrett sidelined, the Browns defense knew it would need people to step up and make plays.

Turns out, it got that and more as the unit held Philadelphia in check — and even produced the only points of the first half — in a 22-17 win at FirstEnergy Stadium on Sunday.

“That has been our team all year just stepping up,” cornerback Denzel Ward said. “Guys going down and next man in. A lot of guys have been stepping up making plays, and we needed that today, especially with Myles being out.”

Ward and the secondary played one of their better games after entering Sunday giving up 252.2 passing yards per game. They limited quarterback Carson Wentz to 235 yards, two touchdowns and two interceptions — his second touchdown coming with 30 seconds left and the game comfortably in hand.

Ward helped put the first points on the board. He came on a corner blitz from the left side, forcing an errant throw that linebacker Sione Takitaki intercepted and returned 50 yards for a touchdown — his first career pick and score.

Takitaki had a nice game, finishing with two tackles, including one for a loss on running back Miles Sanders to force a third-and-7 and effectively stall what looked to be a promising drive before halftime. Even though Cleveland’s offense got the ball back with 2:32 left, it couldn’t add to the 7-0 lead.

“It felt awesome,” Takitaki said of the pick-six. “First one in the NFL, and it was for a touchdown. It was great.

“We went in our blank coverage to the strong side, and I am standing beside to see the running back kind of flaring out so I know that is my coverage. I kind of widen out there with him. Once I go to attack because I see the QB starting to throw it to him, it kind of got tipped in the air. I saw it went in the air and I am like, ‘All right, have to go up and get it.’ Came down with it, a ton of daylight and ran to the touchdown. It felt great.”

While the Browns never trailed, the Eagles had a chance to rally down 22-10 with 3:49 left. Wentz led Philadelphia to the Browns 10-yard line and ran a play-fake out of the shotgun. He lofted the ball up for receiver Alshon Jeffery, but it sailed into the arms of Ward, who leaped for the interception.

The pick was a bit of redemption for Ward, as he was called for a 33-yard pass interference penalty on the play before that brought the Eagles into striking range.

“I felt that it was a terrible call, but it is all about just playing the next play,” he said. “I felt that I did that on that play. Like I said, finding a way to help my team win and was able to come away with the takeaway.”