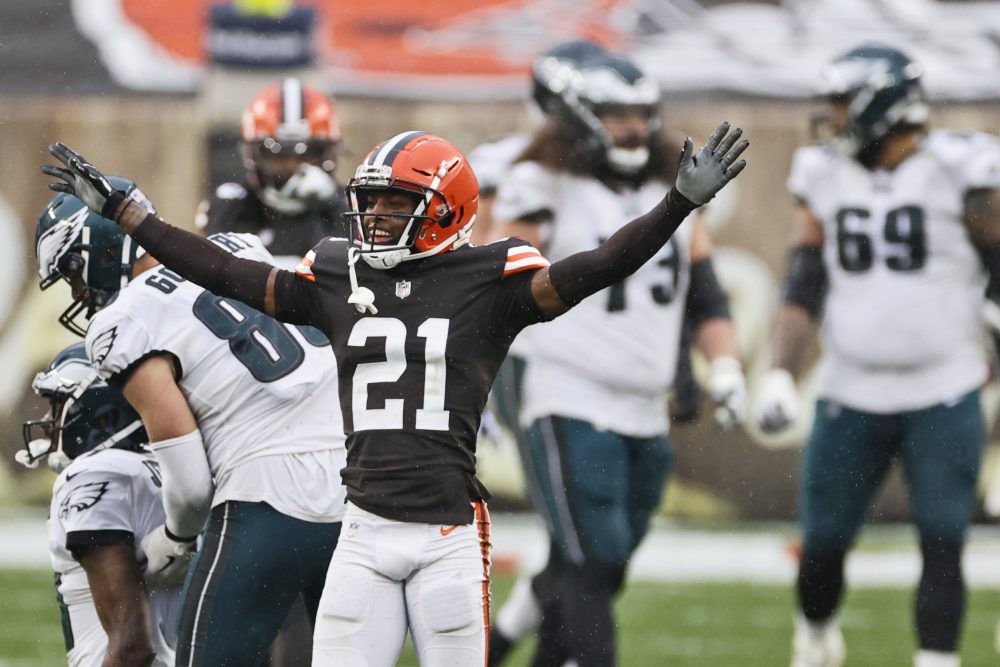 Denzel Ward played one of his best games Sunday as he continued to solidify himself as one of the league’s best cornerbacks.

But the positive vibes were interrupted Monday when he reported a calf injury to the medical staff. He was scheduled to undergo an MRI, coach Kevin Stefanski said.

Ward played all 68 defensive snaps in the 22-17 win over the Eagles, finishing with an interception, three other passes defensed and a quarterback hit that led to linebacker Sione Takitaki’s 50-yard interception return for a touchdown.

Stefanski said he didn’t have a feel for the severity of the injury.

“I really do not know,” he said. “I will update you guys when we get the (MRI) results.”

Ward leads the league with 15 passes defensed after a career-high four against Eagles quarterback Carson Wentz. He has two interceptions, a forced fumble and 38 tackles. He demonstrated his toughness earlier in the season while playing through a groin injury and has been a steadying force in a secondary beset by injuries.

“He is making plays on the ball. He is tackling well. He is doing a nice job,” Stefanski said.

Ward’s interception with 2:01 left helped seal the victory. He got the defense started on its big day with a hit on Wentz that caused his swing pass to float into the arms of Takitaki.

The play didn’t call for Ward to blitz, but he did after the tight end stayed in to block, leaving Ward free of coverage responsibility.

“I just saw that they had blocked down so I added on and blitzed and was able to get there in time,” Ward said after the game. “Sione made a great play and picked it off and returned it for a touchdown.”

“There are always calls that we have and then there are also heady plays that guys make in this scenario where a guy is blocking and he knows he can add,” Stefanski said. “The really good ones I have been around know when to take those risks, and that was one of those times.”

“Denzel is a warrior,” he said. “I get excited when he makes plays. I get pretty excited. I did not sense any type of injury from him. I guess we will just see how that goes and hope for the best.”

The Browns got some good news in the secondary, as an MRI on strong safety Ronnie Harrison’s knee revealed only a bruise. Stefanski called him day-to-day and said he’s hopeful he’ll be able to play Sunday in Jacksonville against the team that drafted him in the third round in 2018.

“I definitely do not want to overstate it, but I think I feel good about it,” Stefanski said.

Harrison was limited to six defensive snaps against the Eagles. He was hurt on Philadelphia’s second offensive play trying to help with a tackle along the sideline and went to the medical tent then the locker room. He returned with 1:09 left in the quarter and played four snaps, including giving up a 32-yard completion to tight end Dallas Goedert. Harrison was clearly hobbled.

The Browns traded a fifth-round pick to the Jaguars in August for Harrison. He took the starting role from Karl Joseph and has an interception that he returned for a touchdown, a sack, a fumble recovery, six passes defensed and 31 tackles.

“Ronnie is a great piece added to the defense,” Goodson said. “Excited about his play and his production. His chemistry with all of us as far as a feel and a sense, it is kind of hard to explain.”

** Second-year safety Sheldrick Redwine, who replaced Harrison for much of the game, is dealing with a knee injury that Stefanski termed day-to-day.

The weather has played a big part in Baker Mayfield completing only 12 passes in each of the last three games. He’s attempted just 20, 25 and 22 without a touchdown or interception.

Mayfield missed two golden chances for his 16th touchdown of the season on the Browns’ second drive. He underthrew tight end Harrison Bryant in the end zone from 14 yards but got a pass interference call. He then badly overthrew tight end Austin Hooper from the 2, and the Browns were stopped on fourth down two plays later.

Receiver Jarvis Landry is used to rarely leaving the field but played only 38 of 67 snaps (57 percent) against the Eagles, catching two passes for 23 yards. Hodge led the receivers with 48 snaps, and Higgins followed with 40.

“That is kind of how the game unfolded there,” Stefanski said. “There were a couple of personnel groups late in the game that culture one receiver, and Hodge was taking the bulk of those. Jarvis, you guys know how I feel about him, how hard he plays and how he battles, and the plays he is making are making a difference in our wins and losses.”

Landry played at least 84 percent of the snaps the last five seasons but is down to 70 percent this year. He played through a broken rib for four weeks before the bye, which limited his playing time.

Linebacker Mack Wilson wasn’t having it.

Goedert caught a short pass late in the fourth quarter, lowered his shoulder into Ward then shoved him backward along the sideline. Wilson came over and knocked the bully off his feet and into the Browns sideline.

The Browns (7-3) and Raiders (6-4) claimed the former first-round pick off waivers Monday, according to NFL Network, but he was awarded to the Raiders because they have the worse record. McKinley was on waivers for the third time because he failed physicals the first two, but the Raiders and Browns continued to put in claims.

** Kareem Hunt played 36 snaps and Nick Chubb 30 at running back.