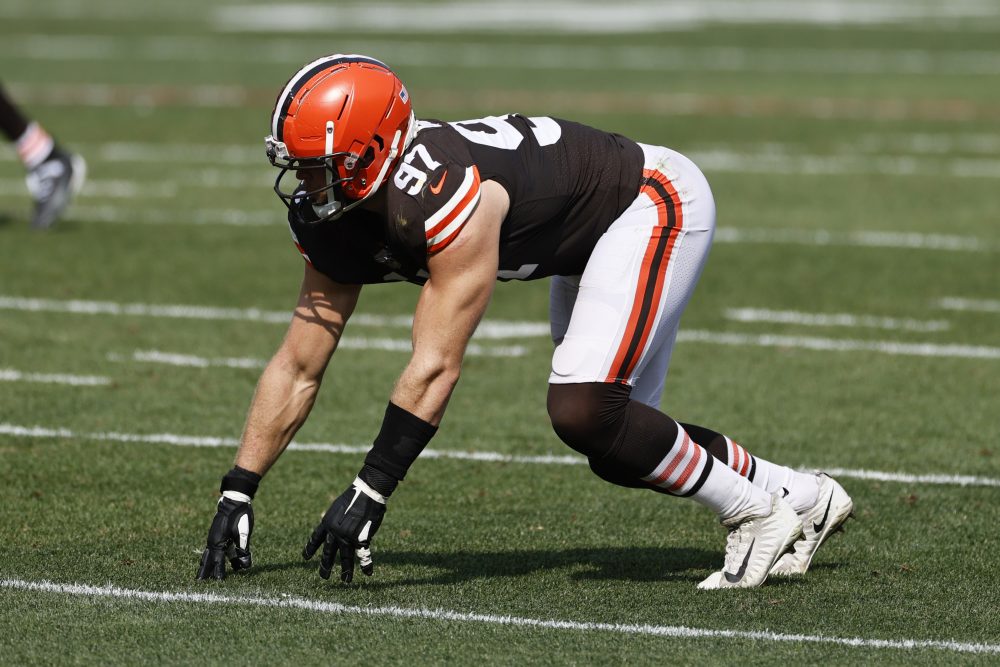 Another defensive end out for the game Sunday against the Jaguars.

Another day without a normal practice.

Ends Myles Garrett, who shares the league lead with 9.5 sacks and four forced fumbles, and Joe Jackson had already been ruled out for the trip to Jacksonville. Garrett tested positive Friday, and Jackson went on the list Tuesday.

The Browns are down to Olivier Vernon, Adrian Clayborn and practice squader Cameron Malveaux at end. Tackle Sheldon Richardson has played some end in his eight-year career, including last season, and can slide outside.

The team facility shut down in the morning before reopening for practice, which was highly unusual for the second straight day as contact tracing continued into the afternoon.

The Browns (7-3) hope to have a full-squad practice Friday before traveling to Jacksonville on Saturday. The contact tracing revealed no high-risk contacts Wednesday and Thursday, and the eight players who were held out as a precaution Wednesday were cleared to return Thursday.

The next worry for the Browns is rookie left tackle Jedrick Wills, the No. 10 pick. He was ill and didn’t practice Wednesday or Thursday. If he tests negative for COVID-19 again Friday morning, he’s expected to return.

That’s the league’s new protocol during the pandemic.

“It is just 2020. That is all it is,” running back Nick Chubb said Wednesday of the uncertainty. “Since the beginning of this year, everybody has been resilient. We had to make time during OTAs on virtual on Zoom. We had to be flexible. We could have been called in any time to have practice or meetings. I think it is just a part of us this year.”

“He has been great,” Chubb said. “We all look to him in these times, and he is steady-handed. It seems like he is not really worried about everything. He knows we are going to get our work in and knows it is going to be OK, so we are all following him.”

The Browns have unfortunately become accustomed to positive tests and schedule changes. The facility shut down for a time for the third straight day Thursday.

Gustin became the fifth player on the team’s COVID-19 reserve list. He would’ve been No. 6, but offensive lineman Chris Hubbard was activated Thursday.

Stefanski had ruled out Garrett, Janovich and Jackson for the Jaguars game.

Gustin started in place of Garrett last week in the 22-17 win over the Eagles. He had three tackles and a quarterback hit in 46 snaps. In 10 games and three starts this year, he has 22 tackles, including two for loss, and two quarterback hits.

The Browns didn’t have a positive case this season until a staff member tested positive Nov. 7 during the bye week. While they’re believed to be unrelated to each other, the Browns have had at least five players test positive since.

A player can be placed on the reserve list for a positive test or if he’s quarantining after being in close contact with an infected person.

The return of Hubbard, 29, gives the Browns their valuable, versatile sixth lineman.

He started at right tackle in Week 2 when Jack Conklin was injured and at right guard for three games when Wyatt Teller was out with a calf strain.

Hubbard was the starting right tackle in 2018 and ’19 and took a pay cut to return as the top backup this year. He’s on the team’s social justice committee and is one of the most well-liked guys in the locker room.

Because the defense didn’t practice, the injury report was a projection.

** Running back Dontrell Hilliard was held out for the second straight day as a precaution.

LB Sione Takitaki placed on COVID-19 reserve list; offense and defense practice separately
Kevin Stefanski’s ability to adjust has been on display all season, and again during this strange week