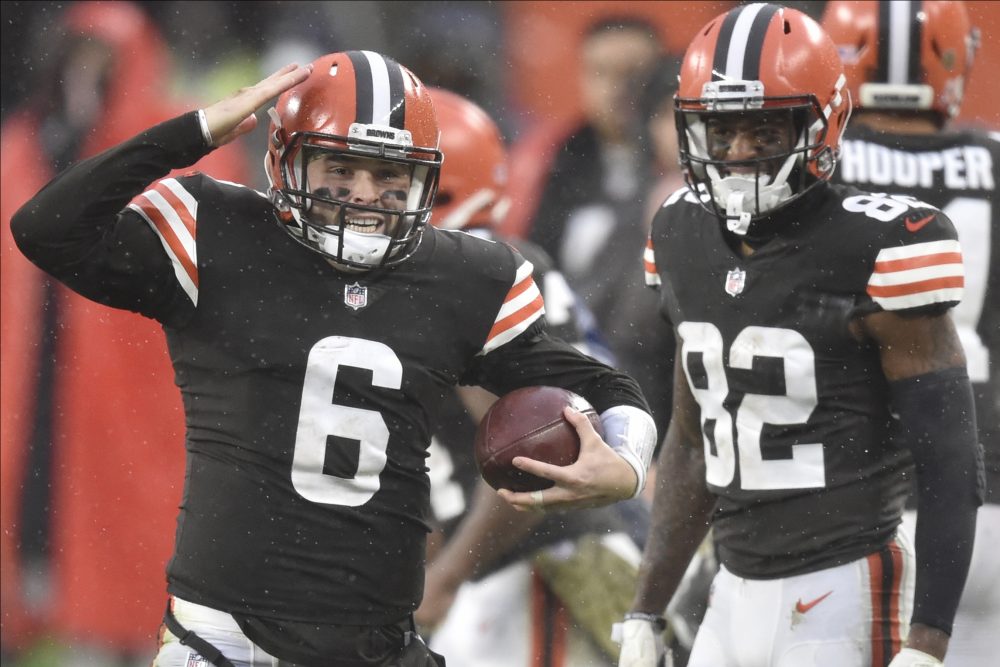 The first pop culture reference went over my head.

The third fit the moment and was clever, so I regretted not including it in my story.

The fourth forced me to seek an explanation.

Baker Mayfield dropped a famous line — the first from a Will Ferrell movie and the others from rap songs — in his postgame interviews following the last four Browns wins. Beat writers only have access to Mayfield on Zoom twice a week during this pandemic season — after games and on Wednesdays — so I did my research Tuesday night and came prepared Wednesday afternoon.

Why are you quoting rap and movie lines in your postgame interviews?

“What are you talking about?” Mayfield said incredulously.

You know what I’m talking about.

“I thought they were all original. My bad,” he said.

Do you have a bet with someone? Is there a reason?

“Gambling is illegal, Scott,” he replied, keeping a straight face.

I had one more shot to fire. What goes into picking the lines?

The smile had gotten bigger, and Mayfield wasn’t fooling anyone pretending he’s been calling audibles when the plays were clearly scripted.

He first line he “invented” was from “Talladega Nights: The Ballad of Ricky Bobby,” starring Ferrell and John C. Reilly.

“Just the mindset of trying to be just a bunch of big, hairy American winning machines is important,” Mayfield said Oct. 11 after a win over the Colts. He had been asked about his ailing ribs.

He stepped into the rap world after the last three wins.

“Having to watch that first quarter — Stop. Drop. Shut ’em down. Open up shop. Like, oh no. That’s how Ruff Ryders roll,” paying homage to DMX’s “Ruff Ryders’ Anthem” following his five-touchdown performance in Cincinnati.

“I think Myles took the approach that real G’s move in silence like lasagna,” from Lil Wayne’s “6’7” came in response to a question about defensive end Myles Garrett’s fourth-down stop against the Texans.

“When they knew that Myles was out, they knew they had to get funky on the field, and just like an old batch of collard greens, they just played well together,” Mayfield said Sunday after the defense rallied without Garrett to beat the Eagles. The line comes from Dr. Dre and Snoop Dogg’s “Nuthin’ But a ‘G’ Thang.”

Whether it’s a friendly wager, an inside joke or just Mayfield trying to be funny, the half-hour after a win is the perfect time to have a laugh.

A straight answer Wednesday would’ve been nice but wasn’t necessary. At least he can protect a secret better than he protected the ball on Fletcher Cox’s strip-sack Sunday. (That’s my attempt at good-natured ribbing.)

He completed only 12 passes in each of the last three games. Yes, weather was a factor in all of them, but the lack of big numbers and the secondary role in the offense for much of the season would have plenty of quarterbacks sulking. Mayfield hasn’t shown any sign of that. He’s winning games and not being asked to carry the offense.

He has a great chance to get rolling Sunday against the Jaguars, who have lost nine straight and have serious injury issues at cornerback. And while the latest forecast calls for a 50 percent of showers, it’ll be 75 degrees and the wind won’t be an issue.

“I am just happy to go where it is a little bit warmer,” Mayfield said. “There is a ton of room for improvement from last game, climate and all. I need to be better.

“We have to be able to be extremely efficient in the pass game.”

The Browns will need to rely on Mayfield as they continue their drive to the playoffs. As they search for at least three more wins over the final six games, there’s no question Mayfield will be asked to make accurate, on-time throws in critical moments. He did so brilliantly in the win in Cincinnati — 21 straight completions, five TD passes, the winner with 11 seconds left — and will have to channel that performance against the better defenses of the Titans, Ravens and Steelers.

“If you play quarterback and you take care of the ball, you are more often than not putting your team in a position to win just because you are keeping them in the game and not giving the other team short field, points off turnovers or those momentums swing,” Mayfield said. “Those critical downs, those third downs late in the game and the smart plays to avoid negative plays, that is what it takes to win in my eyes. Obviously there are more things than those, but it starts right there.”

Mayfield hasn’t thrown an interception since his first attempt in Cincinnati on Oct. 25, a string of 94 attempts. He’s taken care of job No. 1 and walked away with wins in three of the four games.

“Yeah, definitely having more fun,” he said. “Winning is always fun, but I love this group that we have because we have been able to deal with everything that is going on and we have come together closer. When you go through adversity, you come out stronger on the other end, and it is extremely enjoyable.

“Our job is not finished yet so we are going to continue to get better and work for the ultimate goal.”

The Browns have had a difficult week with positive COVID-19 tests, daily contact tracing and no full-squad practices Wednesday or Thursday, but they should be able to handle the reeling Jaguars. The real mystery is what quote Mayfield will “borrow” after the win.

How about something from “Caddyshack,” “Die Hard,” “Rounders” or a Bruce Springsteen song?