Notes: Jedrick Wills returns to practice after missing 2 days with illness, on schedule to start Sunday vs. Jaguars 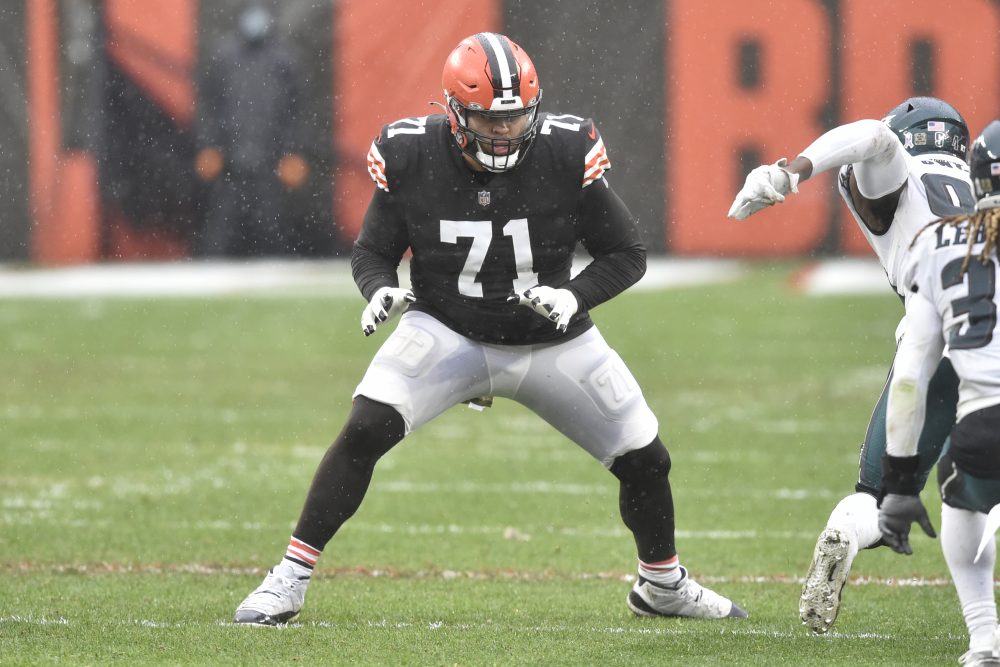 BEREA – A sense of normalcy returned for the Browns on Friday.

For the first time this week, the Browns practiced as a team. With positive COVID-19 tests and the contact tracing that followed, the offense and defense practiced separately on Wednesday then the defense stayed home Thursday.

Wills stayed home both days with an illness but was back Friday after continuing to test negative for the virus. He practiced fully and is on schedule to start Sunday against the Jaguars.

“It is always good to get the five guys together because there is so much communication that has to occur with those five guys,” coach Kevin Stefanski said. “Practice ends and the offensive line and the backs stay out there and they get extra pass-protection drills, because communication is key. Good to have Jed out there.”

The good news comes in a week dominated by COVID-19. Defensive ends Joe Jackson and Porter Gustin and linebacker Sione Takitaki joined defensive end Myles Garrett and fullback Andy Janovich on the reserve list, and they were all ruled out for the Jaguars game.

“We educate our guys as much as we can,” Stefanski said. “We adhere to the protocols. I would tell you, we have had no high-risk close contacts through all of this, and I think that is a big deal as the protocols are written.”

The schedule and lineup were shuffled throughout the week.

Teller was questionable last week, too, but played every snap in the 22-17 win over the Eagles.

The Browns will again rely on Olivier Vernon with Garrett out for the second straight week. Vernon had three sacks and a safety against the Eagles.

“That is what I told him, once you do it once, we expect to see it again,” coordinator Joe Woods said. “He has always been capable of doing that.”

Gustin replaced Garrett in the starting lineup last week, but veteran Adrian Clayborn will get the call this week. Vernon, Clayborn and practice squader Cameron Malveaux are the only ends available, so tackle Sheldon Richardson will likely get some snaps on the outside.

“We have flexibility across the defensive line, so we will be able to move guys inside and outside whenever we need to,” Woods said. “We feel comfortable going into this game.”

The hope is Garrett will be able to return next week against the Titans.

“Myles to my knowledge is doing fine. Feeling good,” Woods said. “He is always involved in our meetings. Mentally he will be ready. It is just getting him back physically on the field and getting him ready to go.”

Nickelback Kevin Johnson is expected to move outside from the slot and start in place of Ward. Johnson missed the first two games after his liver was lacerated during a freak accident in practice.

“He has come back and done a nice job,” Woods said. “We can definitely slide him outside or keep him inside. He will be able to do both for us this Sunday.”

If Johnson starts on the outside opposite Terrance Mitchell, Tavierre Thomas and M.J. Stewart are the top options in the slot.

“It is like having two fighters in your corner,” Van Pelt said. “You have Mike Tyson and Evander Holyfield, and they both come out in different rounds and you are facing the fresh guy that can knock you out with the home run punch every time.

“That is how it really feels. Both of those guys are elite backs. To have them with the ability to keep them fresh at times and spell them with each other, it is a good problem to have for us.”

Receiver Jarvis Landry feels grateful and blessed to be playing after offseason hip surgery but said he’s still working his way back to 100 percent.

“I am still on that road, but I am doing everything I can,” he said. “That bye week really gave me some more life mentally after going damn near 50-60 weeks straight of just rehabbing, training and getting to the feel of practicing and trying to make sure I make the season.

“My body is definitely in a better place this week. I would definitely say I had one of the best weeks that I have had so far of practicing.”

Landry played 38 of 67 snaps (57 percent) against the Eagles, third among the receivers.

“Listen, I want to be out on the field every play,” he said. “But we try not to have tendencies and we try to make sure that we rotate guys in, whether it is being able to give me a blow in a situation or it is allowing a guy who he wants to do some run-blocking things.”

Special teams coordinator Mike Priefer gave a blunt assessment of the blocked field goal by the Eagles. Philadelphia’s Derek Barnett split the gap between Teller on the outside and right tackle Jack Conklin on the inside.

“The left end and the left tackle did a terrible job,” Priefer said. “Their footwork was bad. They were soft.”

** The Jaguars tried an onside kick last week in which a receiver kicked the ball and tried to recover it.

“I do not think that receiver wants to do that again,” Priefer said. “You saw the hit he took from Pittsburgh. I do not know if I would want to do that kick anymore. I thought it was interesting, but it is a way to get a guy hurt.”

** Priefer was proud of punter Jamie Gillan’s performance in the rain last week, which included pinning the Eagles deep before Vernon’s sack for a safety.

“He has grown as a situational punter and as a bad-weather punter, and that is exactly where he needs to be,” Priefer said.

Notes: Olivier Vernon named AFC Defensive Player of the Week for 3 sacks and safety in win over Eagles
Notes: Callie Brownson to have larger role Sunday, as TE coach Drew Petzing won’t make trip to Jacksonville after wife has baby