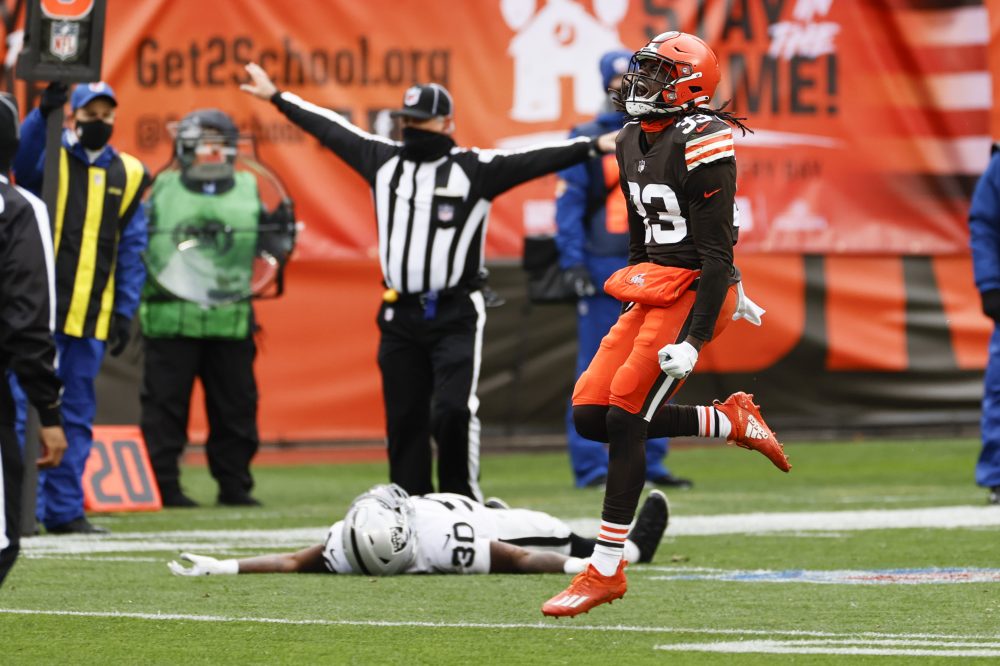 BEREA — Safety Ronnie Harrison was “heartbroken” and “shocked” when the Jaguars traded him to the Browns in September.

“God had his hand on this one,” he said Friday. “It has been great. I couldn’t even imagine a better place or a better fit for me. I feel comfortable and I like it here.”

Harrison will return to Jacksonville this weekend with revenge on his mind. The Browns (7-3) look to keep their playoff push going against the Jaguars (1-9), who have lost nine straight, been decimated by injuries, especially at cornerback and receiver, and will start their third quarterback of the season in journeyman Mike Glennon.


“I already circled this one on the calendar,” Harrison said. “I am very excited. This is a great opportunity to show what I have with my new team.

“Just trying to keep it the next game. Not trying to make too much of it and not get too emotional with it.”

For a while Sunday it looked like Harrison wouldn’t have the chance for revenge, or to show up his former team. He injured a knee early in the 22-17 win over the Eagles, tried to return but couldn’t stay in the game. He played six total snaps.

But the MRI showed only a bruise, he practiced Wednesday in a limited capacity and was a full participant Friday.

He declared himself 100 percent, but only after some severe pain.

“I didn’t think it was going to be too bad because I kind of knew what happened,” he said. “The amount of pain I had was unmatched to what I felt before with something like that. That is what kind of scared me a little bit. The injury itself, no, sir.”

“Really, I was kind of heartbroken at the moment just because of how fast everything happened,” he said. “I didn’t really know what to expect up here. I just knew it was cold. I knew they had a couple of good guys on offense and they had a couple players, especially on defense, as well.

“Really, I was kind of shocked in the moment. I really wasn’t even putting too much thought into Cleveland.”

The trade that stunned Harrison has been a pleasant surprise for the Browns. They needed a safety after rookie second-round pick Grant Delpit was lost for the season with a ruptured Achilles tendon and preferred someone young with the chance to become part of the future.

After learning the system, Harrison took the starting strong safety spot from Karl Joseph. He has 31 tackles, an interception he returned 47 yards for a touchdown, six passes defensed, a sack and a fumble recovery and could pair with Delpit as the starting tandem of the future.

“I feel like Ronnie is improving every week,” coordinator Joe Woods said. “The more reps he gets, the more comfortable he gets and the better his play. He has a knack for just turning over the ball or taking away the ball.”

“In that meeting that I had when I was informed, they said that they felt that I was the player who they could get the most value for out of the safeties,” said Harrison, who started 22 games with the Jaguars. “That is what they told me.”

The Jaguars beat the Colts 27-20 in the opener and haven’t won since, putting coach Doug Marrone’s future in jeopardy.

Harrison (6-foot-3, 214 pounds) is a physical specimen who stands out as he flies around the field. Woods has used him more around the line of scrimmage lately, including as a blitzer.

“He makes plays on the ball in practice just like he does in the game,” coach Kevin Stefanski said. “He brings an energy to the position.”

“He continues to make plays. He is showing up,” receiver Jarvis Landry said. “He is playing through injuries. He is doing all of the things right.

“He is a great addition to our team. He has made plays for us since the day he walked into the building. I know it is going to be like a homecoming for him going back to Jacksonville. Hopefully he can catch a couple picks and celebrate.”

Woods knows it’s natural for a player to get amped up when facing the team that let him go but he wants Harrison to stay steady.

“The biggest thing that I want him to do is make sure that he plays within himself — make the plays you are supposed to make and do not do anything crazy,” Woods said.

The message may not make it through to Harrison. With the defense missing its two best players — end Myles Garrett is on the COVID-19 reserve list and cornerback Denzel Ward has a calf strain — Harrison feels a greater responsibility.

“I put a lot on my shoulders this week,” he said. “Everybody has been coming to me and asking me all week about different stuff with what they do and what is this player like and what is that player like. I really feel like I am the player and the guy who has to lead the charge, being that I am from there.

“With those guys being out, especially in the backend, just trying to help in any way that I can — making plays, interceptions, turnovers or whatever it may be and just trying to get the defense started.”