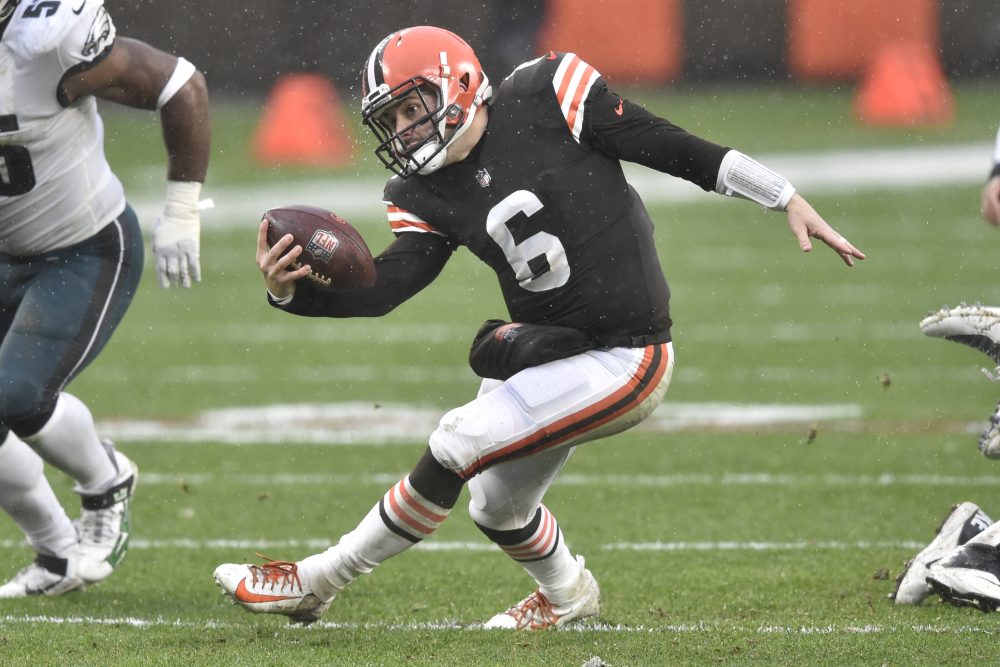 The Jacksonville weather will be good and its cornerbacks will be bad, so Baker Mayfield should have no problem completing more than 12 passes — his total for each of the last three games. The Cleveland weather was frightful for those games, limiting what Mayfield and the passing game could do. With the forecast calling for 74 degrees, little wind and at the most a 25 percent chance of rain and the Jaguars decimated at cornerback, Mayfield should have a big day.

“I know they are calling for some warmer weather and maybe a possibility of showers, but it can’t be as bad as it has been the last three weeks so the opportunity should be there,” coordinator Alex Van Pelt said.

The rediscovery of the passing game is important to support perhaps the league’s best run game. Jaguars coach Doug Marrone made it clear his focus is stopping running backs Nick Chubb and Kareem Hunt, and that’s going to be the opponents’ plan the rest of the season. Mayfield, receiver Jarvis Landry and tight end Austin Hooper must make the defenses pay for paying too much attention to the run. The Browns rank 30th in the league in passing (188.6 yards a game), so warm Jacksonville is the perfect place to build confidence for the better defenses awaiting with the Titans, Ravens and Steelers.

Mike Glennon hasn’t started a game since 2017. He hasn’t played since last year, when he threw a total of 10 passes. Glennon, 30, will start at quarterback for the Jaguars. Gardner Minshew is still recovering from a thumb injury, and rookie Jake Luton was benched after going 0-3 and throwing four interceptions last week.

Glennon is a third-stringer for a reason and will give the job back to Minshew probably next week, but that doesn’t mean he can’t be dangerous.

“I’ve got nothing to lose,” said Glennon, who’s 6-16 as a starter. “I don’t know when this opportunity is going to come again. I’m just going to go out there, have fun, let it rip and see what happens.”

Glennon catches a break, as the Browns will be without their top two defenders — defensive end Myles Garrett is out with COVID-19 and cornerback Denzel Ward has a calf strain. Linebacker Sione Takitaki and defensive end Porter Gustin are also out after testing positive, and free safety Andrew Sendejo is questionable with a groin injury. No matter who’s playing, the Browns can’t let Glennon get comfortable or gain confidence.

“When you look at him, he is an experienced quarterback,” defensive coordinator Joe Woods said. “He is a tall quarterback. He does a nice job of going through his progressions, so we know he is very capable of running their offense.

“If he lets it rip, then we are doing our job and I feel like we will be in position to make the plays you are supposed to make.”

The Browns can’t afford to take Glennon for granted, but their top priority must be stopping running back James Robinson. Without their two starting receivers (DJ Chark Jr. and Chris Conley) and with issues on the line, the Jaguars’ best, and perhaps only, chance of an upset is Robinson controlling the game.

Robinson is third in the NFL with 762 rushing yards, averaging 4.4 yards a carry with five touchdowns. The undrafted rookie out of Illinois State also has 31 catches for 249 yards and two more touchdowns.

“He has great vision. He really sees the holes clearly,” Woods said. “He shows his quickness. He has good balance. He has a lot of power. You see him running people over, so he is capable of doing everything. We are definitely going to have our hands full with this guy.”

The Browns rank eighth against the run (105 yards a game) and have regrouped after the Raiders rushed for 208 in the slop Nov. 1. Philadelphia’s Miles Sanders got off to a great start last week, but Woods adjusted and Sanders gained 3 yards on five second-half carries. Without Garrett, Gustin and Takitaki, ends Olivier Vernon and Adrian Clayborn and rookie linebacker Jacob Phillips (the likely replacement for Takitaki) will need to be stout at the point of attack.

Tackles by defensive tackle Sheldon Richardson, most in the NFL for a lineman.

The Browns didn’t have a full week of practice and won’t have their two best defenders. It won’t matter against a Jacksonville team with less talent, more injuries and its own COVID-19 issues. Browns 35, Jaguars 24.

Commentary: Baker Mayfield hasn’t thrown a ton lately, but he’s having fun collecting wins and talking after them
Commentary: A win is a win, but the Browns need to play much better as the competition gets much tougher