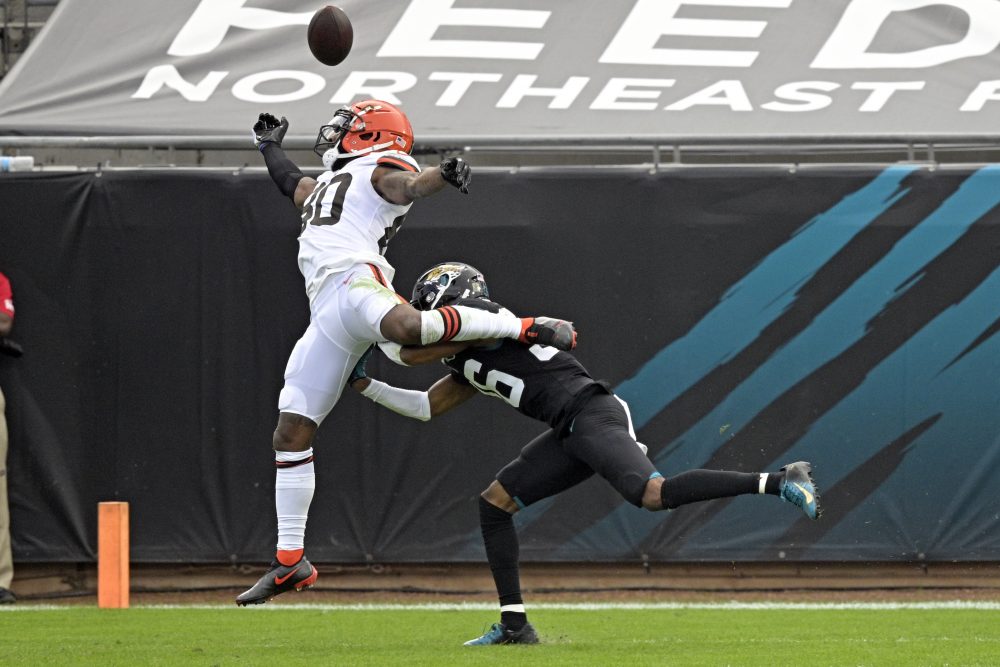 The good news is the Browns won’t have to play Jacksonville in the playoffs.

Did it really have to be that hard? I mean, with all due respect, Mike Glennon? Really?

As playoff tune-ups go, almost losing to a 1-9 team that was using a third-string quarterback and came into the game having scored the fourth-fewest points and allowed the fourth-most points in the NFL isn’t going to get it done.

So the Browns won Sunday, but they certainly didn’t get it done, and I don’t even know what that means.

“We made it hard on ourselves,” said Browns coach Kevin Stefanski. “I think we can be better.”

They better be better, because there are no more 1-9 teams on their schedule the rest of the way. Oh-and-11? Yes. (I’m looking at you, Jets). One and nine? No. So Sunday’s game wasn’t really a tune-up for anything other than proving that the Browns’ 8-3 record is legit.

Granted, the Browns had a lot going on last week. Injuries, COVID-19 tests, on and off shutdowns of the facility. Oh, yeah, and Thanksgiving. It clearly wasn’t a normal work week. But on Sunday, playing a team that had lost nine games in a row that was using a third-string quarterback, the Browns entered the fourth quarter nervously trying to protect a 20-19 lead.

But in the fourth quarter Nick Chubb did his Nick Chubb thing and the Browns escaped the lair of the toothless Jaguars with a victory that almost didn’t feel like one.

“It went down to the wire a little closer than we’d like, but we found a way to pull it out,” said Joel Bitonio.

Meanwhile, every game from now until the Browns’ last game, whenever that is, feels like a weekly referendum on Baker Mayfield’s future with the team. Sunday was no different, proving that the jury is still out. Way out.

Mayfield made some terrific throws, but also some terrifying ones. Exhibit A in the latter category came on a third-and-goal situation in the second quarter, when Mayfield threw wildly on a complete-able pass to Jarvis Landry. It was Mayfield’s worst pass since the play before that when, with Rashard Higgins wide open in the end zone, Mayfield fired one halfway to Tallahassee.

In a third-and-1 situation late in the fourth quarter, Mayfield threw behind a wide-open Kareem Hunt. But Mayfield also threw for two touchdowns — his first in over a month — and had no interceptions.

So was Mayfield good or bad? Stefanski left no doubt about which side he came down on. Asked how he thought Mayfield played, the first words out of the coach’s mouth were a chilly, “He played OK.”

After a couple of more praiseworthy sentences, Stefanski closed with, “He is doing a nice job of helping us win.”

If that seems a little lukewarm for a quarterback whose 116.7 rating was his third-best of the season, then perhaps the coach felt those numbers read better than the performance looked. If so, he’s right.

It was a game of extremes for the Browns as a team, and for various individuals, flashing maddening sequences of “good” and “good grief!”

Chubb and Kareem Hunt are the exceptions. They combined to rush for 206 yards on 33 carries, an average of over 6 yards per carry. In truth, those two may be the keys for the Browns’ attempt to clinch a playoff spot and to make some noise when there. You win in the playoffs by being able to run the ball, and there is no more dynamic backfield duo than those two.

As disjointed and ugly as it sometimes was, Sunday’s effort did result in a win. A win without style points, but a win nonetheless. Now, however, the bar is about to be raised. The Browns’ next two opponents are 8-3 Tennessee and 6-4 Baltimore. This is officially crunch time for a franchise that hasn’t been to the playoffs since Tom Brady was a teenager, or something like that.

A loss in Jacksonville would have been a gut punch. Good teams can sometimes play bad and still win. Let’s just leave it at that. Win and move on is better than win-and-whine.

Instead, the Browns won while playing bad. That’s not easy to do.

“As a team, we have not played a full, complete game yet,” Bitonio said. “We won some games and we have been in some battles and a lot of one-score games the last few weeks, but I think if we put it all together … I think it is going to be something special.”