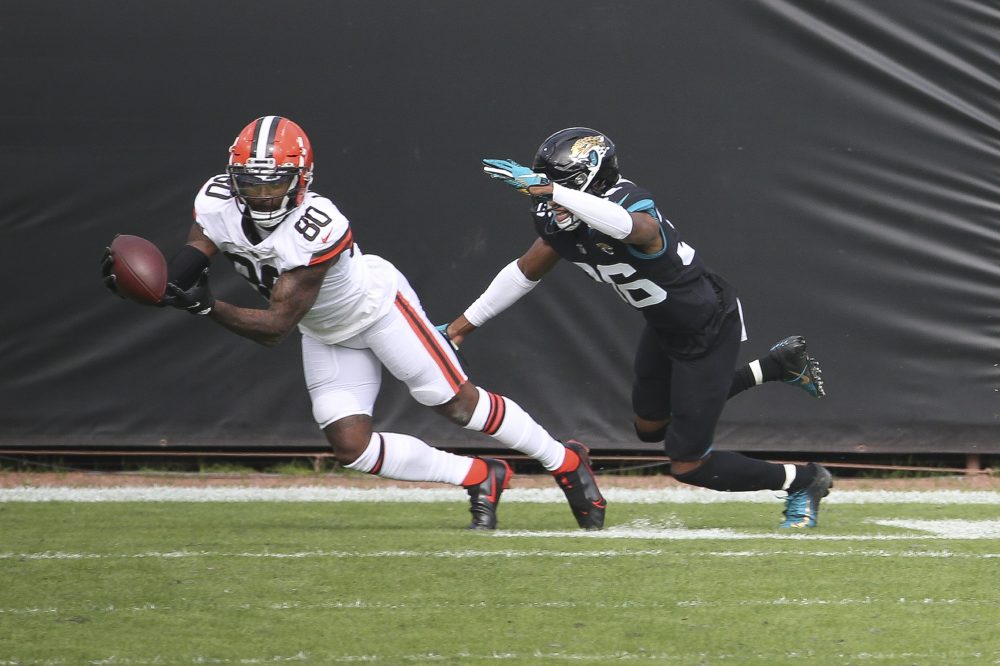 Persistent injuries have been nagging Jarvis Landry all season long, so it must have felt good to be the one dishing out the hurt Sunday.

Landry tormented Jacksonville with clutch catch after clutch catch — many of them well-contested — to the tune of 143 yards and a touchdown during the Browns’ 27-25 win in Jacksonville, Fla.

He entered Week 12 with 38 catches for 471 yards and no touchdowns through the first 10 games. A large part of his struggles can be attributed to the hip he had surgery on in February still nagging him, compounded by a lingering rib injury suffered against the Colts in Week 5.

“It has definitely been a challenge for me,” Landry said of his season. “That is something that I’m frequently talking to (wide receivers) coach (Chad) O’Shea about and coach Kevin (Stefanski) about. It is always, I guess in a sense, tough to have that conversation when you are winning and you still feel like you may not be getting the ball.


“I just trusted this team, kept my head up and kept working hard for the guys around me, knowing that (my time) will come. It came today, and I just made every play that I possibly could get my hands on.”

While Landry is generally featured in the offense each week — Sunday was his 106th straight game with at least two catches — he has not been the impact player the Browns traded fourth- and seventh-round picks to Miami for and subsequently signed to a five-year, $75.5 million contract in 2018. He entered Sunday averaging 47.1 yards per game.

Sunday he had 91 yards in the first half.

“I think the time of the rest throughout the bye week gave me the opportunity also to just get my body right,” he said. “Like I said on the call, I am still on that road. I think the bye week more for me was just a mental relief from rehab, learning a new system and how the season was going.”

On Sunday, though, Landry frequently made his presence felt. He jump-started the Browns’ second drive of the game with a 24-yard catch, then caught his first touchdown of the year from 5 yards out on a nice back-shoulder throw from Baker Mayfield.

He had another big catch to get the Browns in position to retake the lead before halftime with a 23-yard grab just before the two-minute warning. He reached behind his defender in tight coverage and snatched the ball away from him.

“I thought Jarvis Landry had a hell of a game, but at the same time I thought that there were two or three balls we were close on that could’ve easily gone the other way,” Jaguars coach Doug Marrone said. “He’s a good player and he made those plays on it.”

He wasn’t done. On the last drive of the third quarter, Landry battled for the ball and ended up ripping it away from his defender for a 14-yard gain. The Browns took a 27-19 lead four plays later.

Landry then helped reverse field position on Cleveland’s first full drive of the fourth quarter. Mayfield threaded the needle from his end zone with a throw over the middle and Landry dived past his defender to make the 19-yard catch. The Browns ultimately drove to Jacksonville’s 22-yard line, but turned the ball over on downs.

“Jarvis had an incredible day,” Mayfield said. “Not only that, but there were a lot of tight windows and contested catches that he made. The guy is unbelievable. I have said that. He is a great player, a great teammate, and he just continues to always put the team first no matter what. We have seen that week in and week out. For him to have a day like this, we are very happy for him.”

Old friend Joe Schobert waits for Nick Chubb in middle of Jaguars defense
Jarvis Landry hopes to use his breakthrough against Jaguars as launching pad for rest of season, run to playoffs