Mailbag: Is this the year for a playoff appearance? Why aren’t the RBs a bigger part of passing game? Could a TE help out at DE? 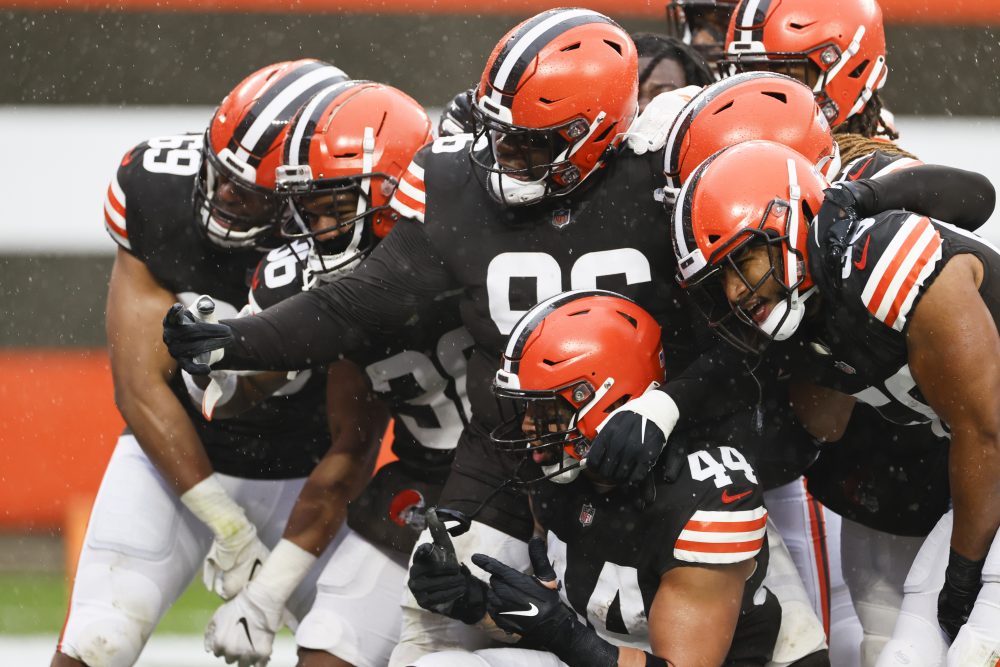 Q: Will the Browns make the playoffs?

A: Yes. I think the Browns will be able to do what they didn’t in your time with them.

Coming out of the bye, I thought the Browns would be vulnerable to an upset by the Texans or Eagles. But they caught a break with the nasty weather that neutralized Deshaun Watson and his speedy receivers, then capitalized on a series of mistakes by Carson Wentz. At 7-3, the Browns are in perfect position to snap the 17-year playoff drought.

I still believe 10 wins will be enough to clinch an AFC wild card spot. The win I’m expecting today against the Jaguars gets the Browns to eight. They’ll only need two over the final five weeks — at Titans, vs. Ravens, at Giants, at Jets and vs. Steelers — and should be able to get at least that many.

So see you in the postseason.

Kevin Stefanski’s ability to adjust has been on display all season, and again during this strange week

Q: I expected the running backs to play a much larger role in the passing game this year but that really hasn’t materialized. Is this due more to play calling or the quarterback’s decision making?

A: You’re right about the minimal impact of the backs in the passing game. Kareem Hunt has 22 catches for 151 yards and four touchdowns, and Nick Chubb has three catches for 17 yards. I think it’s more about the play calling.

Coach Kevin Stefanski relies so heavily on the backs in the run game, I  think he doesn’t want to make them a primary focus of the pass game. Sure, he’s called screens and Hunt’s been effective as a receiver in the red zone, but the pass plays are mainly designed to go to the receivers and bushel of tight ends. The backs are also often asked to stay in to pass protect, reducing their opportunities.

I don’t want to remove all responsibility from Baker Mayfield. There are plenty of plays where he has the backs in the flat or over the middle underneath and chooses to go elsewhere. That’s fine, as long as he completes the ball to the deeper targets.

Q: Lorain and Ohio State’s Rashod Berry is beginning to get some snaps for the Patriots and one reason is he can play on offense and defense (his few snaps thus far are all at DE). Is there any chance the Browns might be forced to improvise something similar with a TE given the shortage of healthy athletes at DE right now?

A: Berry is certainly a great local story. He bounced between positions at Ohio State, and Bill Belichick recognized the versatility he treasures. Hopefully Berry can stick around with the Patriots, because he should be much better after a real offseason and preseason.

As for the Browns, I don’t think they’re at the point where they have to make drastic position changes. They have three true defensive ends ready for today — Olivier Vernon, Adrian Clayborn and Cameron Malveaux — and tackle Sheldon Richardson has experience sliding outside. That should get them through the Jaguars game, with the hope Myles Garrett can return next week vs. the Titans.

But your point is well-taken, especially after seeing what’s going on in Denver with all their quarterbacks ineligible to play. Flexibility will be more important than ever coming down the stretch, and I’m sure Stefanski and his staff have gone through, or will, the worst-case contingency plans. And your tight end idea is intriguing, as now I’m picturing David Njoku trying to rush the passer.

Q:
John Dorsey to the Lions? Hope so. Would be outstanding with the challenge, if slotted properly into a specific role appropriate for his gifts. Then again, when has Detroit demonstrated such insight when hiring anyone?

A: I keep waiting for Dorsey’s name to pop up for the general manager jobs becoming open but haven’t seen it yet. And we might not. Most GMs don’t get a second opportunity at the job, let alone a third chance. So Dorsey may be reduced to a lesser role if he chooses to get back in the game.

Q: Jimmy Fallon on “The Tonight Show” challenges athletes to say certain weird things then he plays them on his show, so maybe that is what is going on with Mayfield?? Just a thought.

A: I appreciate the response. I wrote during the week about Mayfield dropping movie and rap lines during his postgame interviews after wins. I tried to get Mayfield to explain them, but he wouldn’t go there. Maybe I need to set my DVR for Fallon.

Mailbag: Will Andrew Berry sign Nick Chubb to a long-term deal? Where should the offseason fix of the defense start?
Mailbag: Will Harrison Bryant lose playing time? Should Haslams get credit for Callie Brownson’s role? Will Kevin Stefanski win Coach of Year?