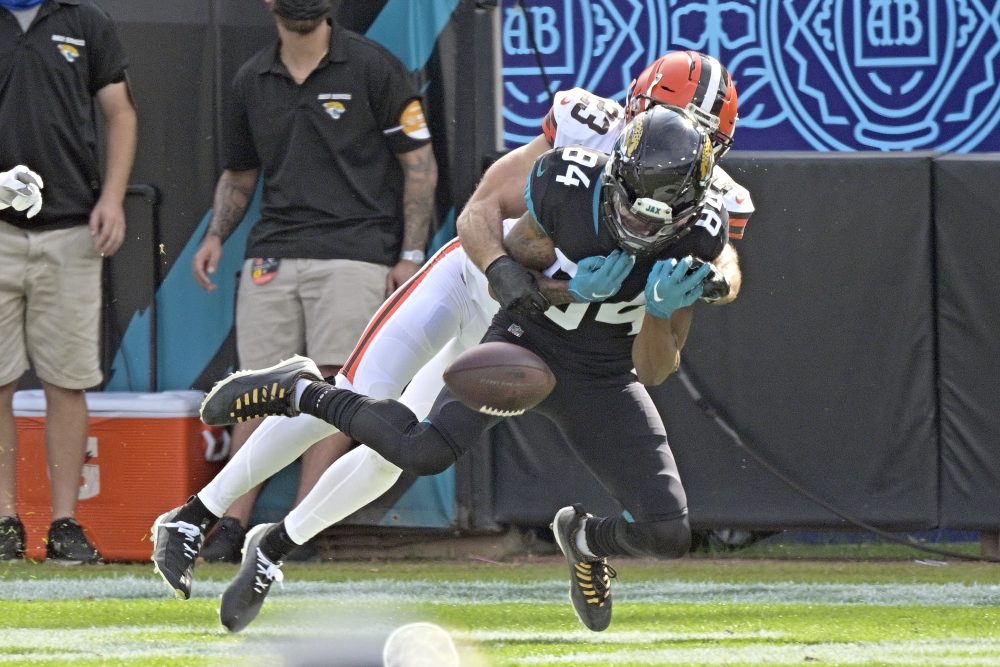 Andrew Sendejo has had a rough year, but he found a way to make some critical stops when the Browns needed them most.

The Browns free safety had two huge plays Sunday, keeping the Jaguars off the board and then from tying the game in a 27-25 Browns win in Jacksonville, Fla.

“Good job by Sendejo for doing his job, being there in positions to be able to make the play,” defensive tackle Sheldon Richardson said.

It’s been all hands on deck for the Browns secondary all season, and this week cornerback Denzel Ward (calf) and safety Sheldrick Redwine (knee), who had been taking snaps from Sendejo in recent weeks, were unavailable. Sendejo had been listed as questionable with a groin injury after being unable to practice until Friday.

He got the start and rewarded the team with a pair of gems.

On the Jaguars’ second drive, quarterback Mike Glennon tried to find Keelan Cole for a 40-yard touchdown, but Sendejo was in position to break up the pass in the end zone.

After the Jaguars scored with 2:14 left in the game, Sendejo preserved the lead. The Jaguars went for the 2-point conversion, and Glennon was flushed out of the pocket. He heaved a prayer to the back of the end zone that Sendejo ensured would not be answered, grabbing the ball and coming down out of bounds to save the day.

“He does a nice job back there,” coach Kevin Stefanski said. “Really playing hard and playing with great effort. Gets his hands on the ball there. Stopping them on those 2-point conversions ended up being a big deal. Really happy for him to make that play, and that is what we need. We need guys in the back end that will make plays on the ball.”

Sendejo, who signed a one-year deal as a free agent in the offseason, has been the object of much criticism on Twitter throughout the season. He had a tackle and a pass defensed and missed a couple of tackles in the run game.

“Callie is a great utility player for us, and she can fill in anywhere,” Stefanski said. “She is involved with the offense, defense and special teams and what she does behind the scenes for us. With what 2020 has brought to us, to me and to this organization, we need people to be team players. Callie will do anything — she is folding towels in the equipment room because we are down a few people there — so anything it takes. I am proud of her and proud of her journey, and it is going to continue here.” 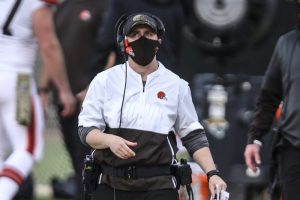 The tight ends were a mixed bag. Austin Hooper caught a 9-yard touchdown, but rookie Harrison Bryant fumbled after a catch on the first play of the second half.

“Listen, she is on it,” receiver Jarvis Landry said. “She has always been on point since the day that she has walked in this building. She is a true testament for all the women that are making a name for themselves in this league. She stepped up to the challenge today and this whole entire week.

“Coaching the tight ends, meeting with them, being able to get the personnel together today, she was just ahead of schedule and on point as ever. She is Callie. She is one of the people that make this building go. We are blessed to have her. The more you can do, right?”

Having a weapon like Nick Chubb to close out games is an advantage the Browns love to use.

Chubb, who led the Browns with 144 yards and a touchdown on 19 carries, was once again at his best in the fourth quarter, piling up 47 yards in the final 15 minutes and helping drain the final 2:14 off the clock. He opened the final drive with a 12-yard gain that took the clock to the two-minute warning, then strung together 7 yards on two carries before a questionable holding penalty on center JC Tretter negated a 3-yard gain that would have iced the game.

It didn’t matter, because Chubb took a screen, juked his defender to stay inbounds and powered through a tackle for a 13-yard gain that sealed the win.

“He did a nice job on that screen,” Stefanski said. “We needed the clock to be running, and he made sure we got the first and the clock was running. He is a very smart player as everybody knows, just understanding the situation.”

Strong safety Ronnie Harrison was pumped to return to Jacksonville and face the team that drafted him in the third round in 2018 and traded him in September. Harrison’s revenge game ended early, as he left after injuring his shoulder on the first play. He’ll have an MRI on Monday.

“Honestly, it was just real tough just watching him do it,” Richardson said. “I knew what it meant to him. You can tell he hit him kind of hard on that first play, and it was just a little too hard for his own shoulders.

“It happens, and I am sorry that it happened to him. I wish him a speedy recovery, but we had the next man up. We did our job to get a W.”

Sendejo’s 2-point breakup was necessary after defensive end Olivier Vernon was penalized for lowering his head to initiate contact on a fourth-down sack of Glennon, extending the touchdown drive.

The Jaguars needed to go for two points late in the fourth quarter because they took a point off the board and went for two early in the third quarter.

After the Jaguars took a 19-17 lead with 11:41 left in the third quarter, Vernon was called for being offside on a successful extra-point kick. Coach Doug Marrone declined the point and accepted the penalty, moving the ball to the 1-yard line for the 2-point try. Glennon threw incomplete.

“It’s always been my philosophy that if there’s a penalty on a play and it goes to the 1, then I’m always going to go for two unless it’s something where it’s going to become a two-score game,” Marrone said. “We had a run-pass option for that play and then they stacked the box, and they were bringing pressure on the weak side, so it caused us to throw it and we didn’t execute it.”

** The Browns went without a fullback for the first time this season. Andy Janovich (COVID) was out for the second straight game, and Johnny Stanton wasn’t elevated from the practice squad this week.

Notes: Callie Brownson to have larger role Sunday, as TE coach Drew Petzing won’t make trip to Jacksonville after wife has baby
Notes: KhaDarel Hodge sees deep playoff run for Browns: “No one can stop us but us”