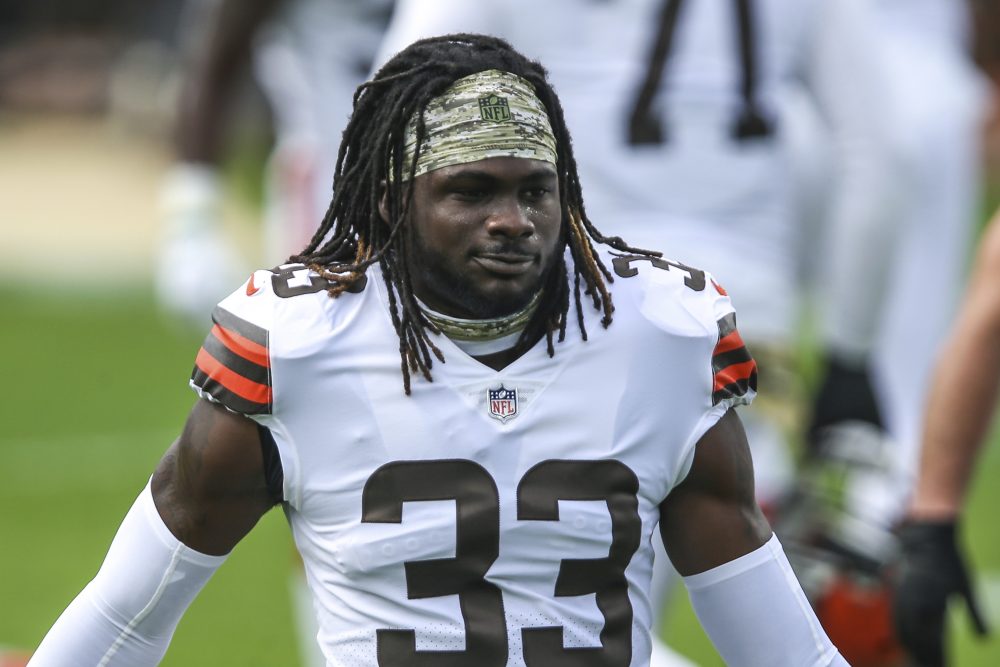 Strong safety Ronnie Harrison quickly established himself as one of the Browns’ best defenders.

They’ll be forced to live without him for a while as they try to make the playoffs for the first time since 2002.

Harrison was placed on injured reserve Tuesday, which mandates he miss a minimum of three games. He injured his shoulder Sunday on the first play of the 27-25 win over the Jaguars.

He’s expected to miss four to six weeks. The Browns have five regular-season games left, so they hope he will be able to return for the end of the regular season and potentially the playoffs. He’ll definitely miss games against the Titans, Ravens and Giants.

The bad news was balanced by the official return of standout defensive end Myles Garrett, who was activated off the COVID-19 reserve list.

Coach Kevin Stefanski said Monday that Garrett was on track to returning. He’ll be ready to go Wednesday when the practice week starts.

Garrett tested positive for COVID-19 on Nov. 20 and missed the last two games. The Browns visit the Titans (8-3) on Sunday.

Garrett is tied for second in the NFL with 9.5 sacks and tied for the lead with four forced fumbles. He’s a candidate to be NFL Defensive Player of the Year.

Notes: KhaDarel Hodge sees deep playoff run for Browns: “No one can stop us but us”

Harrison was acquired in a trade from the Jaguars on Sept. 3. He’s played in nine games with six starts, totaling 31 tackles, six passes defensed and an interception returned for a touchdown.

“I feel like Ronnie is improving every week,” coordinator Joe Woods said last week. “The more reps he gets, the more comfortable he gets and the better his play. He has a knack for just turning over the ball or taking away the ball.”

Harrison’s injury is the latest serious setback for the secondary.

Rookie safety Grant Delpit, a second-round pick, was lost for the season in August with a ruptured Achilles tendon. No. 2 cornerback Greedy Williams is on IR and hasn’t played this year with a nerve injury in his shoulder. And No. 1 cornerback Denzel Ward is expected to miss his second straight game Sunday with a calf strain.

Karl Joseph, who began the year as the starting strong safety, is expected to step in for Harrison. Sheldrick Redwine is also a candidate for more playing time, although he missed the Jaguars game with a knee injury and Stefanski labeled him day-to-day Monday.

The Browns claimed safety Tedric Thompson off waivers from the Chiefs on Monday, but he must pass the COVID-19 protocols before he can practice.

“He is a great addition to our team,” receiver Jarvis Landry said last week. “He has made plays for us since the day he walked into the building.”

Harrison was looking forward to showing off for his former team but was hurt on the first snap when he lowered his shoulder to tackle running back James Robinson.

“Honestly, it was just real tough just watching him do it,” defensive tackle Sheldon Richardson said after the game. “I knew what it meant to him. You can tell he hit him kind of hard on that first play, and it was just a little too hard for his own shoulders.

“It happens, and I am sorry that it happened to him. I wish him a speedy recovery, but we had the next man up. We did our job to get a W.”

The return of Garrett will help the front four as it tries to compensate for the deficiencies in the secondary. Not only is Garrett the team’s best pass rusher, he’s a top run defender, which will be critical against Tennessee’s Derrick Henry, who leads the league with 1,257 yards.

“The guys get a big boost when they see No. 95 out there with them,” Stefanski said. “That is just based on how productive he has been for us and the game-changing plays he has made for us throughout the season.”

Myles Garrett on track to be cleared Wednesday, return from COVID-19 reserve list
Baker Mayfield wants Browns to “seize the moment” in meaningful December games, still mad at himself for missing easy throws vs. Jaguars