Baker Mayfield wants Browns to “seize the moment” in meaningful December games, still mad at himself for missing easy throws vs. Jaguars 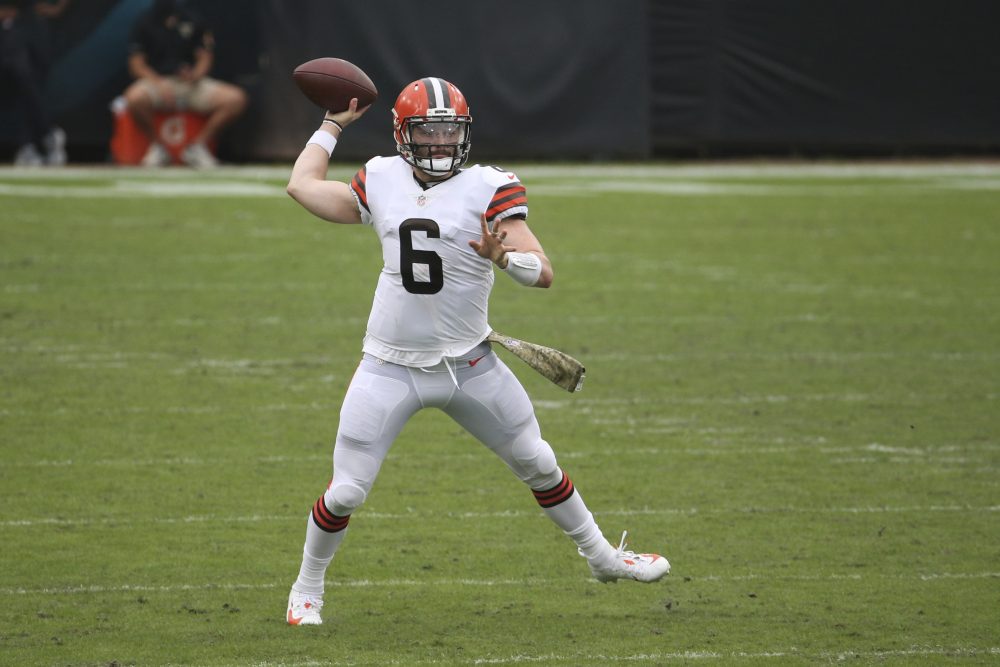 The Browns have reached an important step in their progression. They’re 8-3 and set to play truly meaningful games in December, knowing if they keep up their winning ways they’ll make the playoffs for the first time since 2002.

The stress level rises and the spotlight shines brighter. Especially on the quarterback, whose margin for error shrinks as the magnitude of the situation rises.

“This is the stretch of the season where every game counts, every play counts,” Baker Mayfield said Wednesday. “You have to make these moments count. These are the things that we’ve been trying to build up to, and we’re here now. We’re in the middle of it, so let’s seize the moment.”

Too many moments slipped through Mayfield’s fingers in the final game of November. He threw for 258 yards and two touchdowns in leading the Browns to a 27-25 win over the Jaguars on Sunday but was haunted by a handful of errant throws.

“That game was closer than I wanted it to be because of some of the mistakes that I made, so that’s why I was hard on myself,” he said. “I’m trying to get better each week. That’s taking care of the ball and that’s completing these passes that should be made in my sleep.

“I pride myself on being an accurate passer and I didn’t do that, so I’m going to beat myself up about that because I know I can be better. It pisses me off when I don’t do the things I need to.”

The most blatant misfire was a high throw past receiver Rashard Higgins, who was wide open in the end zone on first down from the 5-yard line. It cost the Browns four points, as they settled for a field goal.

Mayfield also missed receiver Jarvis Landry high and wide a couple of times as he rolled to his right and left, and threw behind running back Kareem Hunt in the flat on a critical third down that helped prevent the Browns from securing the win earlier.

“There’s a couple. The bootleg to the right to Jarvis, just following through on the throws, not drifting towards the sideline,” Mayfield said. “The throw to the left, just getting on top of the ball, getting my hips around. And the one to Higgy, instead of reading it low to high, I went high to low so I was late instead of being on time with it. So my feet were a little out of whack and tried to rush it.

“So there’s just things that are extremely fixable, but they shouldn’t have to be fixed.”

Notes: Jack Conklin excited for return to Tennessee; Nick Chubb says he’s been “amazing for us”

Running back Nick Chubb appreciates Mayfield being his toughest critic.

“Baker is different,” Chubb said. “He will own up to things that he has not done well. Nobody has to say anything to him, and he will fix it himself in his mind of his own. We know that. We trust in that.

“He is hard on himself but he wants to be great. He has a competitive nature. That is just who he is.”

The promising signs are there, as well. Not only did Mayfield make several pinpoint passes into tight windows against the Jaguars, he’s gone 123 passes without an interception since the pick on his first throw against the Bengals on Oct. 25. The Browns are 4-1 in that span, rising to the top wild card spot in the AFC playoff race.

Mayfield threw seven interceptions in the first seven games and has been stuck on that number. Only 11 quarterbacks with at least 200 attempts have thrown fewer.

“It’s knowing when to be aggressive and putting us in the best position to win, and that’s taking care of the ball and that’s what I’ve been harping on and will certainly continue to do that,” he said.

“Yeah, it is a big deal. It is going to be a big deal this week again versus a team that is plus-11,” coach Kevin Stefanski said of the Titans’ turnover margin. “You have to always as a quarterback straddle that fine line of being aggressive and smart, and I think he has done a nice job the last few weeks.

“And even in that last game, he threw some tight-window balls that had to be perfect and they were. He is doing a nice job in that regard.”

“He’s settled in to this scheme and what they’re asking him to do,” Vrabel told Titans reporters. “He’s doing a lot of good things at the line of scrimmage, getting them into good plays that they want to run. He’s just a lot more comfortable there. He has taken care of the football, which has allowed them to be at the top of the turnover margin in the league.”

The Titans are second in the NFL at plus-11 and the Browns are tied for sixth at plus-5.

The Browns have come a long way from that opening disaster under coach Freddie Kitchens, who was fired after going 6-10 in his only year.

“It’s night and day,” Mayfield said. “Obviously the staff, personnel, the team, but like we talked about, it starts with the culture. So a lot of that was the moves in the offseason to create this culture change. So we’re going to continue to build on it. We’re not satisfied whatsoever.”