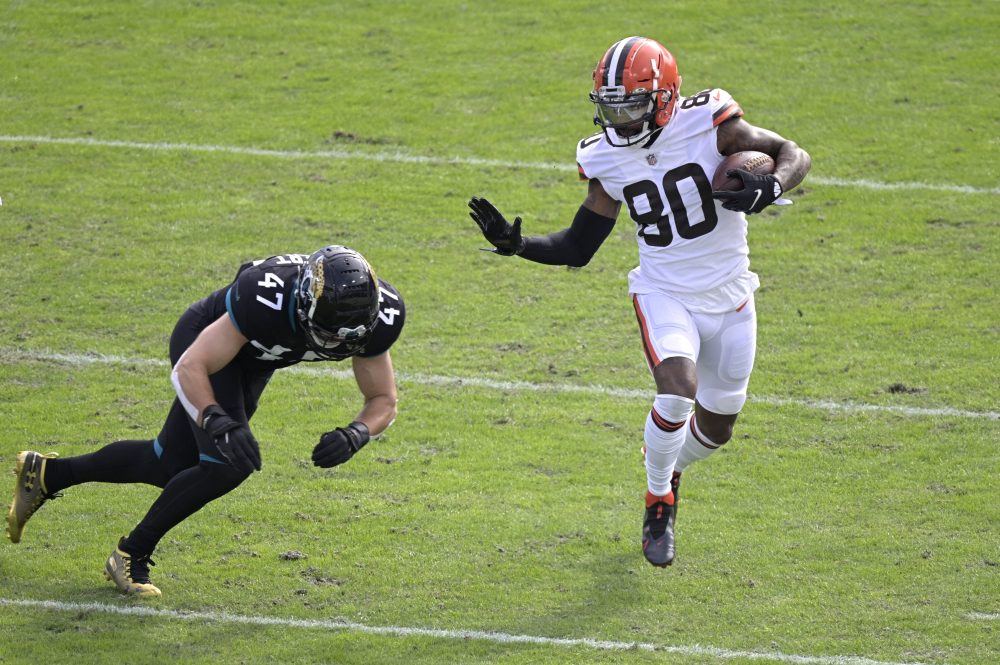 Receiver Jarvis Landry hopes he and the Browns are only scratching the surface.

The Browns are 8-3, on a three-game winning streak and hold the top AFC wild card spot. Landry has played in one playoff game in his seven-year career, in 2016 with the Dolphins, and relishes the opportunity to play meaningful games at this late stage of the season.

“We know that we have to take it one game at a time. Not that our position is set in stone, but we still have to go out here and win games and play good football. I think we understand that. I understand that. We have just been working and putting in the work each and every day.”


Landry went to work Sunday in the 27-25 win over the Jaguars. He blew away his previous season highs with eight catches for 143 yards and his first touchdown catch.

After 38 catches for 471 yards through 10 games, the performance was a boost to the confidence of the five-time Pro Bowler who’s taken over the No. 1 receiver role with Odell Beckham Jr. out for the season with a torn anterior cruciate ligament.

“It’s huge. I feel like I am in a sense just getting started, so I am excited,” Landry said. “I hope with that more opportunities come. It challenges me obviously to continue to work hard, to continue to get my hands on the ball in practice and to continue to earn the trust of the coaches that have to be able to call these plays and put me in these type of situations for this team to make those type of plays. That is something that I am excited about and looking forward to.”

Coach Kevin Stefanski also views the big game as an example of what’s to come over the final five weeks of the regular season and hopefully into the playoffs.

“It is important for Jarvis to have a game like that, and we expect that from him,” he said. “We know what he is capable of. Now that he is healthier, he is continuing to get better and better, and he will find a way to affect the game.

“He has the uncanny ability to make tough catches, and they typically result in first downs. That is a very big deal for what we are looking for.”

Commentary: Kevin Stefanski has chance to end Browns’ Coach of the Year drought

Landry called the breakthrough against the Jaguars a “great combination” of opportunities that hadn’t been there earlier in the season plus him feeling healthier after offseason hip surgery, a cracked rib in Week 5 and the bye week last month.

“We have not really had an opportunity to throw the ball in the prior weeks to our Jacksonville game. We wanted to come out and kind of make a statement in the air,” he said, referring to a three-game stretch of bad weather. “Baker (Mayfield, quarterback) is just trusting me and giving me opportunities, regardless of who is around. Just coming down to me understanding that I have to make these plays for this team. In tough situations, a guy on my back or whatever it is, I have to make those type of plays, and that is what I want to continue to do.”

Landry was about as clutch as possible vs. the Jaguars. His eight catches went for seven first downs and a 5-yard touchdown. The shortest non-TD catch was 14 yards.

“I did not know that but, yeah, that is awesome,” he said. “Listen, that is what we need. That is part of the good football that we have coming up ahead. More of that.”

Many of the grabs weren’t easy, with Mayfield trusting Landry to make the play despite tight coverage and only a sliver of an opening to fit the ball.

“His hand strength really showed up there,” coordinator Alex Van Pelt said. “That is something that we have to find more ways to get him involved because obviously he can take over a game like he did the other day.”

The Titans are also 8-3 and will host the Browns on Sunday. The Browns are 1-3 in games against teams that have winning records, so they could prove something to the league by topping the Titans.

“We are excited about the opportunity,” Landry said. “I still feel and believe that our best football is going to be in these last couple of months, and it has to be.

“It is no secret, the the better teams are the teams that go on a run, and those runs start in November and December. We are excited about the matchup.”