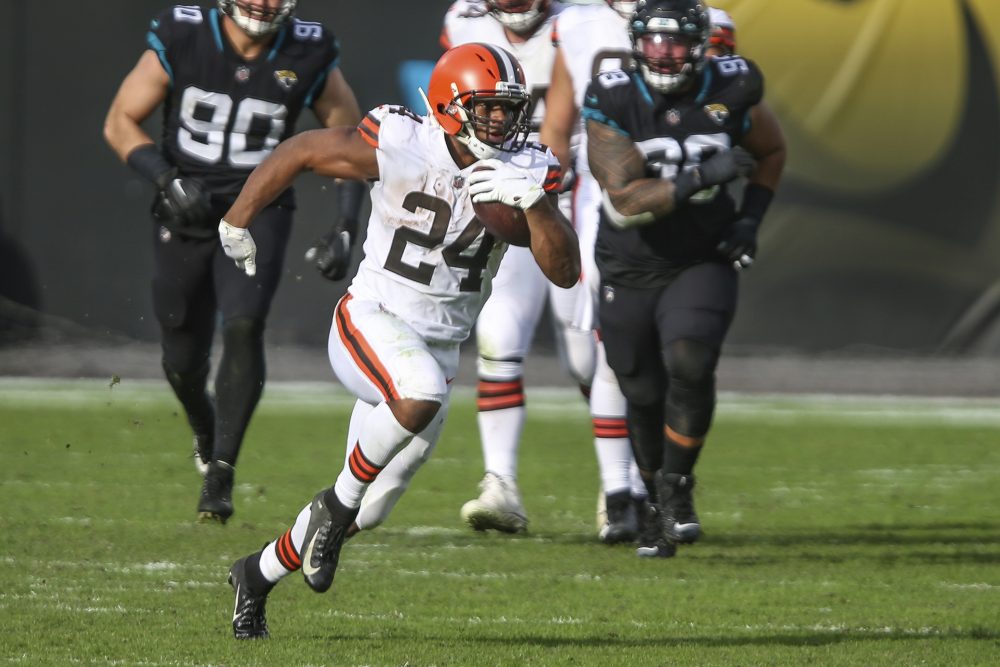 As Derrick Henry steamrolls toward a second straight NFL rushing title, memories of the first still frustrate the Browns.

Nick Chubb had the 2019 title in his grasp before one-and-done Browns coach Freddie Kitchens, the Titans organization and Henry collaborated to rip it away on the season’s final day. The inability to secure the prize for Chubb upset teammates last December and still does.

“I was just crushed for him because I just know how hard Nick works, how hard he runs and the type of guy he is and more for him as a person,” left guard Joel Bitonio said Thursday, remembering sitting next to Chubb on the flight back from Cincinnati then hearing on the drive home Henry had passed him. “The difference was what, 50 yards or something like that? An NFL rushing title and things of that nature are things that you can look back on in 10, 15 or 20 years and tell your grandkids you led the NFL in rushing. It was tough.”

“I think it bothers everybody else besides Nick Chubb, just to be quite honest,” quarterback Baker Mayfield said.

Chubb conceded losing out on the rushing title is a minor irritant, but not with any animosity toward Henry.

“It is more of just myself,” Chubb said. “I am not mad at Derrick Henry for getting the rushing title last year.”

A member of the Browns hasn’t won the rushing title since Leroy Kelly in 1968. The history lesson is relevant again with the Browns set to face Henry and the Titans on Sunday in Tennessee in a battle of 8-3 teams.

Chubb, in his first year as a full-time starter, led the NFL with 1,408 rushing yards through 14 games last season. He carried only 15 and 13 times in the final two losses vs. the Ravens and Bengals, gaining 45 and 41 yards.

Chubb, who always runs with an edge, said the matchup in Music City won’t carry extra meaning because of his runner-up finish.

“Not really. I have not really thought about it,” he said. “I am not really focused on anything that has to do personally with me.”

Chubb doesn’t break character. He doesn’t self-promote. His focus is on winning.

“He wants to be great every game,” coordinator Alex Van Pelt said. “This one is no different than any other.”

New right tackle Jack Conklin came from Tennessee, where he helped clear the way for Henry to sprint past Chubb. Conklin said before the season he wanted to get Chubb the title this year, but a sprained knee cost Chubb four-plus games, too much to overcome, especially with Henry at 1,257.

That doesn’t diminish Chubb’s stats or the season he’s having. He’s tied for sixth in the NFL with 719 yards, second with 6.3 a carry and tied for 10th with six touchdowns.

“He is not a vain guy in the way about how he goes to work,” Conklin said. “He wants to be the best, but he is not going to go talk about it and talk about his stats or anything like that. He is the exact teammate you would want on any team and the type of person you would want to be around every day.”

Since he entered the league in 2018, Pro Football Focus has ranked Chubb first in rushing grade (92.1), first in yards after contact (4.1) and second in broken tackles on runs (141). Chubb leads the league with 10 runs of 20 yards and has the chance for four straight 100-yard games Sunday, which would be the longest streak for the Browns since Kelly in 1968.

“He is a guy that is always doing something to improve,” Bitonio said. “Running back has to be one of the toughest positions. You get beat on the most. You are constantly hit by two or three guys, and you do not know what angle it is coming. He is constantly working to improve his body.

“He just wants to be the best he can be, and that starts with his prehab, his rehab and the way he works on and off the field and just his humbleness. The guy just loves playing football, and it is really fun to block for him.”

Notes: Myles Garrett feels good, looks good in return, so only question is how much he’ll play vs. Titans

Chubb, who was named the Browns’ nominee for the Art Rooney Sportsmanship Award on Thursday, has formed a friendship with Conklin and they raved about each other.

“It is hard to be as good of a person as Nick,” Conklin said. “It is just every day I just try to mess with him a little bit, try to get a few more words out of him and get a smile out of him. He is just a fun guy to mess with a little bit just because he is so positive and he is quiet.”

Chubb is a man of few words, even when “chatting” with Conklin.

“I try to talk to him about Batman, that usually gets him going,” Conklin said. “He likes his superheroes so I try to bring some of that stuff up, and that usually gets a smile or some sort of grunt or something.”

Mayfield was quick to correct a reporter who wanted to talk about the Chubb-Henry matchup.

Not that Chubb can’t go rush for rush and yard for yard with Henry, he just doesn’t have to this year. The Browns have Kareem Hunt, who won the rushing title in 2017 and has 706 yards rushing, a 4.5 average and four touchdowns.

“Kareem is great, too,” Chubb said. “He is just right there with us.

“We are for the most part just hard, hard runners. We don’t do a lot of dancing.”

Cleveland’s rushing attack, which tops the NFL at 161.4 yards a game, has been particularly potent in the fourth quarter after wearing down defenses, but Titans coach Mike Vrabel said it’s also effective early.

“Both those guys are excellent,” he said. “Vision, strength, lower-body strength, they break tackles. They stretch, cut, they have the ability to get the edge.

“Sitting there watching them, you forget sometimes that you have to find ways to stop them because you kinda like the way they play and the way that these guys are blocking for them in front.”