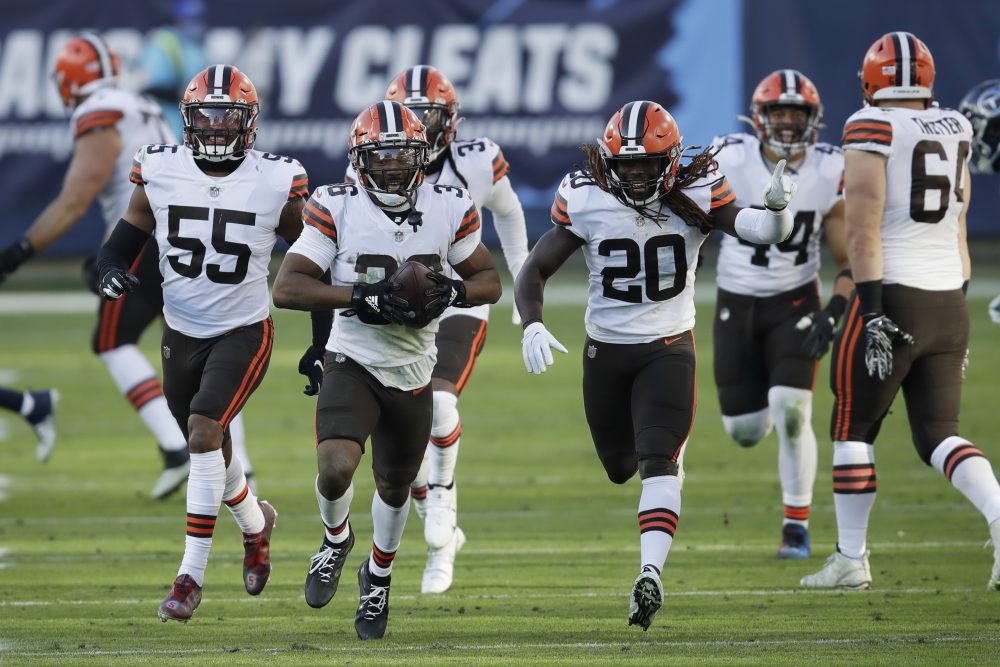 Cleveland’s defense knew it had to contain Derrick Henry in order to have success against Tennessee. It did that, and more, in sparking the Browns to a lopsided first half.

The unit showed why it’s the league’s ninth-ranked rushing defense Sunday — entering Week 12 giving up 108.2 yards per game — in holding the NFL’s leading rusher to 60 yards in a 41-35 win in Nashville, Tenn.

Henry had piled up 1,257 yards through 11 games with 12 touchdowns and no fumbles.

“Our defense played lights out,” quarterback Baker Mayfield said. “The defense and special teams — I know we had a few penalties — but for (kicker) Cody (Parkey) and that group to be perfect on the day and the defense to be able to shut the run game down to where we could get up by that much to where they were having to throw the ball, that was our most complete game. I know we did not finish the way we wanted to by any means, but in the first half, that was the most complete game or complete half that we have played.”

Initially it looked as if the Browns were going to have to win a shootout as the Titans came marching right down the field after Cleveland took a 3-0 lead on its opening drive. However, the Browns held strong as Tennessee crossed midfield. First they forced an incompletion and then defensive tackle Sheldon Richardson stuffed Henry for no gain on fourth-and-1.

The Titans challenged the spot, but the call was upheld, and the Browns responded with a touchdown to take a 10-0 lead.

“He was huge today,” Browns defensive end Myles Garrett said of Richardson. “That fourth-and-1, the stop, those were takeaways for the defense and that is momentum for the offense to go down there and put some points on the board. You can’t understate that, what we do on our side of the ball to get back to them and put them in a good position to put us ahead. That is what they did. They did that all afternoon, and we came out the right side.”

Richardson came up with another big play on the Titans’ first offensive play following the Browns’ first touchdown drive, stripping Henry to cause the running back’s first fumble in 17 games and 375 touches.

“Sheldon plays very, very hard,” Browns coach Kevin Stefanski said. “On Sundays, you see him flying around. He is an emotional leader for us. I am really excited about how he is attacking blocks, getting after the offensive line and trying to penetrate. He is doing a nice job for us.”

Tennessee trailed 38-7 at halftime, but opened the third quarter with touchdowns on its first two possessions. The Titans tried to cut out a possession by going for a two on its opening score, but linebacker B.J. Goodson met Henry at the goal line and stopped the attempt.

“That was huge,” Stefanski said of his team’s effort on Henry. “That was outstanding. The guys, we talked all week, that is a tough, tough task to try and slow that player down. I have a tremendous amount of respect for Derrick Henry. The guys came through by being gap sound and gang tackling. He is an outstanding back.”

Baker Mayfield recommits to being himself, plays phenomenal game in leading Browns to 4th straight win
Browns 41, Titans 35: Baker Mayfield throws 4 TDs in 1st half as Browns get impressive win, improve to 9-3