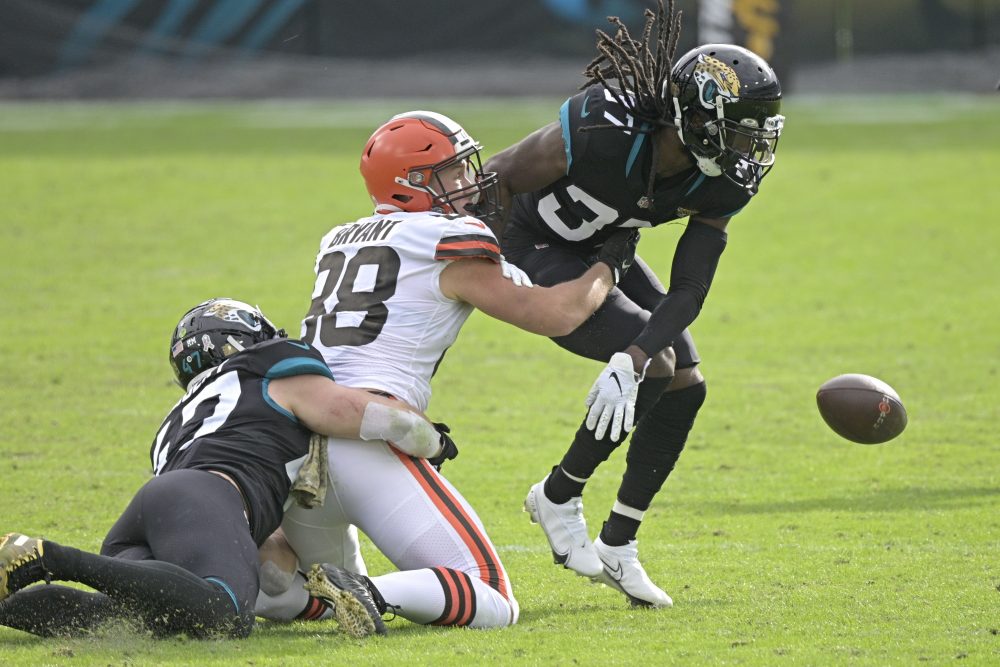 Q: In light of Harrison Bryant having a couple of drops against the Jaguars, do you think Stephen Carlson and David Njoku will get more opportunities at the tight end position?

A: Bryant definitely didn’t have his best game in Jacksonville with his second lost fumble of the year and failure to make a contested catch in the back of the end zone. Coach Kevin Stefanski said the fumbling was a result of technique that Bryant can easily fix, but he has only one catch over the three-game winning streak.

I don’t think the coaches will give up on Bryant, especially after his strong start, but Njoku has closed the gap in playing time (Bryant had a 42-40 edge in snaps last week) and could move ahead this week. And Carlson played his first three offensive snaps in weeks against the Jaguars. I’d expect to see even more of Austin Hooper, a pretty even split between Bryant and Njoku and a little more of Carlson as Stefanski leans on three-tight end sets. I’d just be careful about wanting too much more of Njoku — he’s no sure thing catching the ball.

Q: Last week, Coach Stefanski highlighted Callie Brownson as an unsung hero and made NFL history by choosing her to step in as a position coach Sunday, further proof of Stefanski’s trust. In a league where days later, a TV analyst is “blown away” by ladies with specific knowledge about football, the hiring of Brownson required character and vision. Stefanski identified an organizational gap most NFL franchises are blind to and the pandemic magnified that need. The Haslams have been very behind the scenes this season and I get why, but doesn’t the whole Browns org starting with the Haslams deserve a pat on the back for this one?

A: There’s no doubt. And I’m glad you mentioned this.

General manager Andrew Berry and Stefanski have made many significant changes to the organization, and the hiring of Brownson to an important position was certainly one of them. I love the open-mindedness and embracing of diversity and salute the Haslams for encouraging it.

Brownson has been incredibly impressive in her first year with the organization, and I’m trying to write a story about her interactions with the players, which seem to relax and inspire them.

Q: What will Kevin Stefanski have to do to lock in Coach of the Year?

A: The easy answer is keep winning. A playoff berth seems necessary for Stefanski to have a real chance at the award, and he certainly should be in the discussion after turning the Browns into winners in his first season.

But the problem is no matter what Stefanski does he may not be able to pass Pittsburgh’s Mike Tomlin. If the Steelers go 16-0, Tomlin should be a lock for the award. If the Steelers stumble a couple of times and drop out of the No. 1 spot in the AFC, the door opens for Stefanski.

Q: What happened to receiver Derrick Willies? Excuse the spelling (I fixed it.)

A: Nothing. He’s on the practice squad, the Browns just chose to sign receiver Ja’Marcus Bradley off the practice squad instead Saturday after KhaDarel Hodge (hamstring) and Taywan Taylor (neck) were hurt this week and ruled out for the Titans game.

I know fans have a familiarity with Willies and he’s talented, but Bradley was with the Browns in training camp and has been around the team much longer than Willies, who was added Nov. 17.

Q: Expect Nick Chubb and Kareem Hunt to carry the load? I know Tennessee’s defense is not that good against the run, but we need the DYNAMIC DUO for the playoffs.

A: I certainly do. You’ll see both teams run a bunch today, although I think the game will be decided by which team makes more explosive plays in the passing game.

As for saving the running backs for the playoffs, that’s a secondary concern. The Browns need to make the playoffs first, and can only do that by riding the tandem. The beauty of having them both is that they stay fresh.

Q: Concerned we may be lacking a necessary thumper along the backline of our run D this weekend in Nashville, opposing Derrick Henry. Any chance Joe Woods resurrects a shadow of his Seattle secondary and has Montrel Meander debut as 2020’s Cam Chancellor?

The thought is the team has been cross-training him (again) at both OLB and SS and that they’ve saved him for this encounter, especially helpful with Ronnie Harrison out.

Any chance this occurs?

A: Sorry, Mark. The Browns had their chance and didn’t elevate him from the practice squad.

I know you are infatuated by Meander and I understand his size and flexibility are intriguing, but I’ve seen no evidence the Browns are close to using him. They’ve tried a number of combinations at safety already and he hasn’t gotten a chance, so something must be missing.

I agree the run defense could use help this week against Henry, but I think the coaches are also worried about the safeties in the passing game against receivers A.J. Brown and Corey Davis. Perhaps they feel Meander is too one-dimensional.

Q: Will linebacker Elijah Lee get more playing time? He has done well on special teams. And what about Jacob Philips?

A: Lee played his first, and only, defensive snap with the Browns last week. He started six games with the 49ers in the previous two seasons, so there’s a chance he could get more playing time. But I think the coaches are comfortable with B.J. Goodson, Mack Wilson, Sione Takitaki and Malcolm Smith ahead of Lee.

Phillips is a more interesting case to me. The rookie third-rounder might be the most athletically gifted of the bunch but has been slowed by a knee injury. He’s healthy and should see more playing time, as long as the coaches can trust him. I’m not sure if he’ll take snaps from Smith in the nickel or Takitaki in the base package.

Mailbag: Is this the year for a playoff appearance? Why aren’t the RBs a bigger part of passing game? Could a TE help out at DE?
Mailbag: Why hasn’t offense suffered without Odell Beckham Jr.? Is Denzel Ward already better than Joe Haden? How troubling are the cornerback injuries?