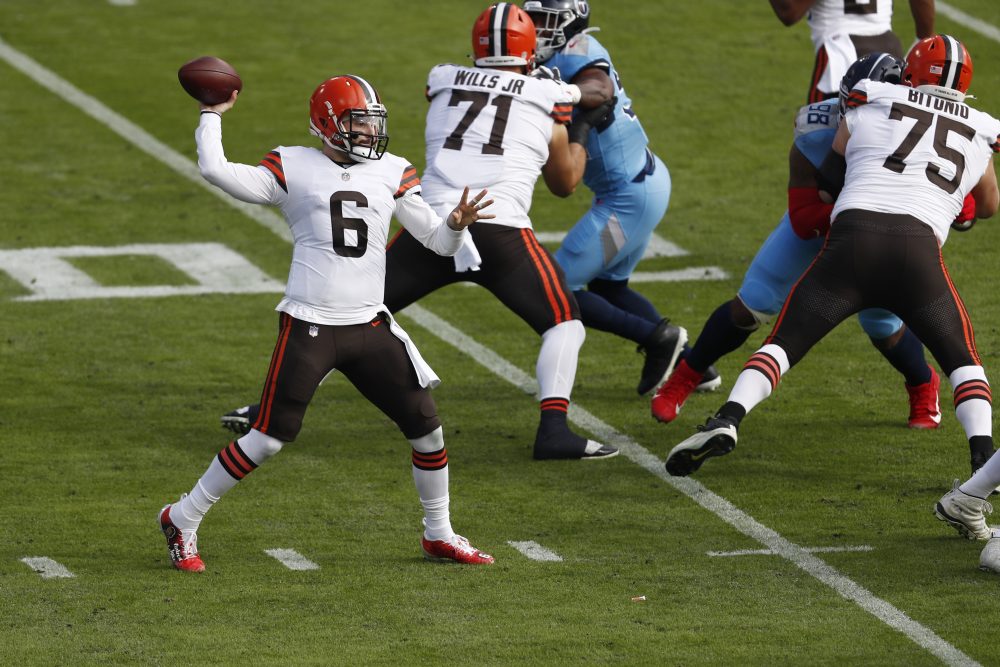 When the offensive line catches as many touchdown passes as it allows quarterback hits, the men in the trenches celebrate.

Backup tackle Kendall Lamm played one offensive snap Sunday in the 41-35 win vs. the Titans but became the star, and envy, of all the 300-pounders who normally revel in doing the dirty work.

“a feeling I’ll never forget!” Lamm tweeted. “Just glad we got the W and I could help the team win! #GoBrowns”

His buddies joined in the joy.

“We were all just so happy for him,” center JC Tretter said Monday. “That is something you can never take away from a guy. It is something he can tell his grandkids.

“That is just awesome. Scoring an NFL touchdown, you join a really elite class. Not many people are able to say that. We have known that play and other plays have been in in the past where he has gone out on routes and we have always hoped as an offensive line is we will get a big-man touchdown. So we were really excited when we saw the ball floating his way.”

The line had a great day even without Lamm’s fun 1-yard score to start the second quarter. Baker Mayfield threw for 334 yards on 33 attempts and wasn’t sacked. The official gamebook credited the Titans with one quarterback hit.

“I thought we protected really well,” Tretter said. “That is something we continue to work on, continue to try and keep Baker clean and give him a chance to go through his reads and make all his throws.

Notes: Wyatt Teller placed on COVID-19 reserve list after exposure to someone outside organization who tested positive

On the lone occasion Mayfield was hit, running back Kareem Hunt was beat in blitz pickup but Mayfield managed to throw the ball away with defensive back Desmond King trying to pull him down. For the majority of the day, especially in the first half when he threw four touchdowns, Mayfield had as much time as he needed to go through his progressions, survey the field and find the receiver running open.

“They are doing a nice job. Anytime you come out of a game with zero sacks and even the pressures, they did a nice job of keeping people out of the pocket and keeping a clean pocket for Baker,” coach Kevin Stefanski said. “That offensive line, like a lot of units, they have to play together. To have those five guys playing in unison, understanding where they are going to be and communicating is key.”

Much has been made of Mayfield playing with confidence. The line deserves plenty of the credit as the Browns are 9-3 and hold the No. 5 seed in the AFC playoffs. Mayfield got spooked when the protection was suspect early last season, developed bad habits and never looked completely comfortable in the pocket.

He’s been much more effective this year, and his passer rating is up to 97.9, 11th in the NFL. He’s been sacked only 17 times — seventh in the league — and wasn’t sacked in four games.

Kevin Stefanski, Baker Mayfield on same page, relying on each other for success

The other half of the equation is the run game. The Browns rushed for 118 yards, only 3.3 a carry, against the Titans but still led the league at 157.8 per game (before the Ravens played Tuesday night).

Running backs Nick Chubb and Kareem Hunt have praised the line for giving them room to run.

“They are great. They are doing an awesome job in the pass pro and the run game,” Chubb said Sunday. “Coach (Bill Callahan) stays on them and keeps them working, and those guys all bought in.”

Bolstering the line was the top priority of Andrew Berry when he was hired as general manager in January. He signed Conklin to a three-year, $42 million deal in free agency and drafted Wills with the No. 10 pick, adding them to Bitonio, Teller and Tretter.

Teller and Bitonio are the league’s Nos. 1 and 3 guards in grading by Pro Football Focus, and the unit ranks among the best.

“I don’t think we have exceeded our expectations,” Tretter said. “We bring in Jack and Jed. Jack is playing at the level that we expect bringing in a guy of his caliber. Jed has not even started to scratch the surface of where he can be as he continues to progress in this league. So those two helping the outside and then the interior three have done well.

“I give a lot of credit to Joel, who continues just to go out every day, every game, and play at a high level as consistent as anybody in this league. I think we always have really high expectations for what we are capable of and what we can do. I think we have done a really good job, but I still think there is room to grow in our group and we can always be better.”

Jarvis Landry hopes to use his breakthrough against Jaguars as launching pad for rest of season, run to playoffs
Browns have evolved in so many ways since opening blowout, readying for rematch with Ravens