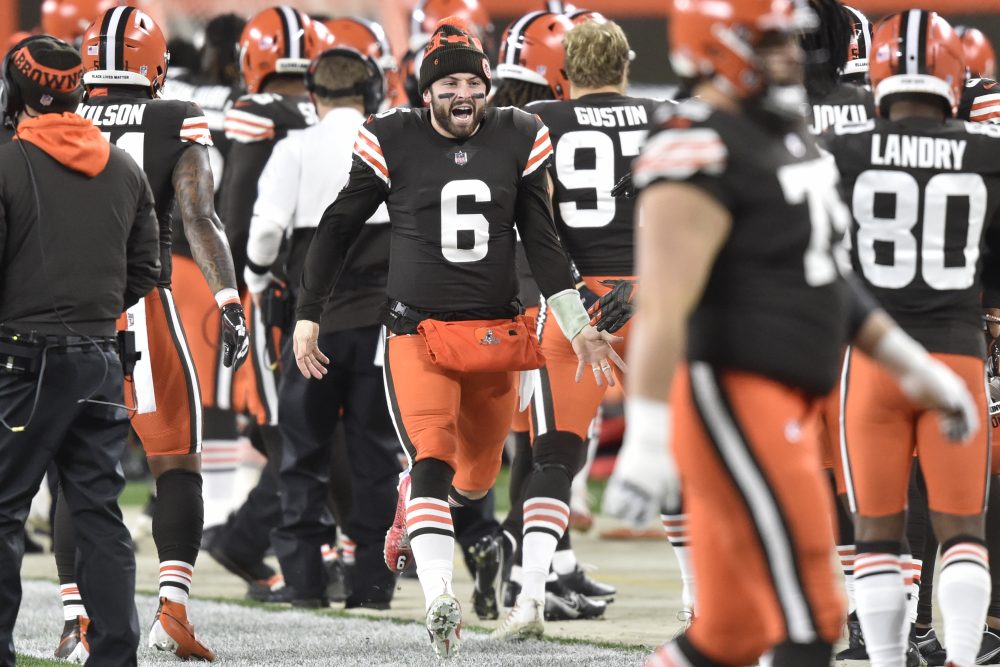 With or without the f-bomb he dropped.

“The thing that stands out about him above all is this guy is an elite competitor. He really is,” Judge said Wednesday on a Zoom call with reporters. “He’s a tough dude. You know his story. How he went through college, had to walk on twice, earn two starting jobs.

“Look, it’s no coincidence this guy is having tremendous success in the National Football League. I love the f—— attitude he plays with, I love the chippiness he plays with.”

Judge apologized for the language, but it certainly helped get his point across.

“That is the kind of stuff I want to bring when you watch tape,” Mayfield said when told about Judge’s comment. “You want to be able to feel that. I have told you guys I want to be authentic and lead these guys. I am passionate about the game, so I appreciate that.”

The Browns love the increased confidence of Mayfield, who’s coming off his best back-to-back games since entering the league as the No. 1 pick in 2018.

Mayfield followed a 334-yard, four-touchdown performance in a win over the AFC South-leading Titans with a 343-yard, three-touchdown (including a 5-yard run) outing Monday night in the heartbreaking 47-42 loss to the Ravens (8-5). Two impressive and inspiring efforts against playoff-tested opponents as the Browns (9-4) chase their first postseason appearance in 18 years.

“As good as he is is as good as the team can be. I’ve seen a lot of greatness,” running back Nick Chubb said. “When he’s on like this, he doesn’t miss. We all know that. We all like that.

“We can’t get off the field when he’s on like that, third down, fourth down, he’s going to make the perfect pass. So, yeah, I feel like the whole team sees that, we feel it, makes everyone play harder.”

The Giants are next up for the Browns on Sunday night in New Jersey. The Browns have a short week to recover mentally and physically for a second straight game n prime time, but that’s easier to do when the belief in the quarterback has never been higher.

“You want the trigger man to be playing freely and with confidence, and I see that with Baker,” coach Kevin Stefanski said. “He understands he has to do it again this week. These challenges keep coming at you. My confidence in all of our players comes from the work they put in throughout the week, and Baker is no exception to that.”

Mayfield wouldn’t have this much confidence if his comfort level hadn’t risen throughout the season, especially after the Week 9 bye. Stefanski’s system accentuates his strengths, the offensive line is protecting well — 17 sacks, none in the last two games — and he got past the self-doubt he admitted crept in during last year’s struggles.

Mayfield is dropping back and slinging it, and it’s usually arriving on time and on target. In the last three games he’s completed 66.1 percent for 935 yards, eight touchdowns, an interception and a 113.5 passer rating.

“Playing with confidence is where I am at my best,” he said. “Trusting these calls, trusting my eyes and going through it, and trusting my guys around me.”

His streak without an interception was snapped at 187 passes in the third quarter against the Ravens, but he bounced back by going 11-for-14 for 149 yards on the next three drives, throwing two touchdowns and running 5 yards for the third score.

“When you are playing the quarterback position and really all of the positions, you are going to get beat. It is an occupational hazard,” Stefanski said. “How you respond to that is really what matters.”

Mayfield’s running ability will never match that of his passing. And his five rushes for 23 yards were easily overshadowed and overmatched by Baltimore’s Lamar Jackson picking up 124 yards and two touchdowns on nine carries. But Mayfield covered for imperfect protection by extending plays, picked up crucial yardage and gave the Browns a fourth-quarter lead with the TD run.

“One thing he does that’s really fun to watch, and you want to eliminate that fun element when you’re playing him, but when he’s really condensed in the pocket, he finds those small seams,” Judge said. “A lot of quarterbacks who you say are mobile quarterbacks rely really on just losing ground and gaining the edge and really using their speed. I think this guy does a great job of playing freeze tag in a phone booth and coming out the winner. He really squeaks his way out, extends the play and he can either run the ball vertically or throw it down the field.”

“I love those boys up front,” Mayfield said. “We have a great group of men in there, and I appreciate them so much. For our guys to go out there, including the backs, and to protect me like that is unbelievable.”

Mayfield likes when he’s able to help out the line by escaping pressure.

“Sometimes you have to do that because not every play is going to be perfect,” he said. “Being able to do that and bail those guys out because they are protecting their (butts) off for me.

“It is a part of the game that if teams want to really drop out and not stay disciplined in the rush lanes, I have to take advantage of that. And I think there have been opportunities that I have not necessarily scrambled for, but that is something I need to continue to do is realize that they can be an important part of our offense.”

Linebacker B.J. Goodson is a fan of everything Mayfield’s doing.

“It’s poetry in motion. It’s that simple,” he said. “It’s beautiful to watch.