Commentary: Don’t look now, but the Browns may have the best offense in the AFC North … thanks to Baker Mayfield 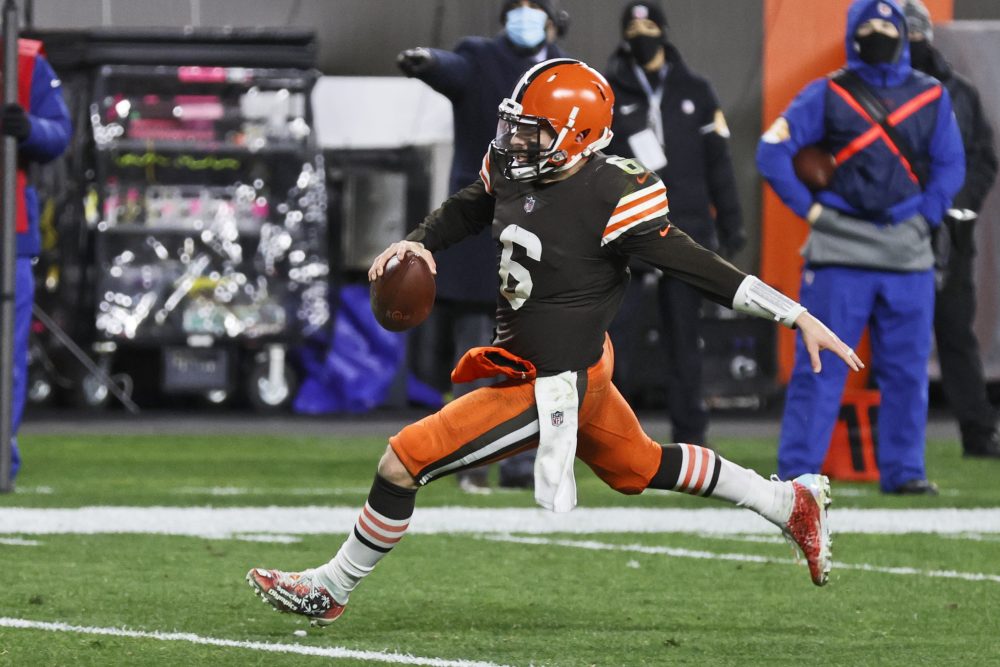 If ever a loss felt like a win it was the Browns’ win … er, 45-42 loss to the Ravens on Monday night. I’m not counting the safety on the last play of the game because that was just nonsense time.

The Browns lost, but it felt like a win because the Browns’ offense, which now resembles an ever-enlarging snowball as it rolls down the hill, has become the best offense in the AFC North.

This is what roster growth and great coaching can do.

Kevin Stefanski, the most can-do coach in the NFL this season, has molded last year’s undisciplined, unaccountable rebels without a clue — the lingering aftereffects of which, both physically and mentally, were responsible for the humiliating 38-6 season-opening loss to Baltimore — into a finely-tuned unstoppable bunch that, three months later, hung 42 points on that same Ravens defense.

Despite the loss, it feels like a changing of the guard is taking place in the AFC North, especially if you watched the plodding, one-dimensional Steelers staggered by the up-and-coming Buffalo Bills, whose 26-15 victory Sunday night felt more like 46-15.

In recent weeks, creaky Ben Roethlisberger, who is now 38 — two months older than Stefanski — has been throwing upwards of 50 passes per game, because his receivers have been dropping about half of them. A team that was once 11-0 has lost two in a row and averaged just 16 points per game in doing so.

In HIS last two games, Baker Mayfield has done a nice impression of peak Brian Sipe, throwing for 677 yards, six touchdowns, no sacks, and a 112.3 quarterback rating. Those two games were against two really good teams, Tennessee and Baltimore, which adds further validity to those numbers. If you listened closely, you could almost hear the trumpets sounding, or the light bulb going on.

Whatever it was, the importance of Mayfield figuring it out at this particular time cannot be overestimated. Who knows? Maybe it’s taken this long for him to finally flush the mush from his system of all the wayward coaching and offensive coordinating he received in the previous two years.

The bottom line is the Browns have scored 83 points in the last two games against two quality teams. It feels like a corner has been turned for Mayfield, and when a team’s quarterback makes a performance leap, he generally takes his team with him.

Indeed, it seems fair to say now that the Browns have the best offense in the AFC North. They’ve gained the most yards in the division, have the highest average of yards per play (5.9) the fewest turnovers, the most first downs, the most touchdowns and the highest net yards gained per pass attempt (7.0).

They also are just one-less Cody Parkey miss from leading the division in scoring. The Steelers lead with 349 points, one more than the Browns.

Mayfield is a big part of all of that, and don’t look now but he soon may be the best quarterback in the division, if he isn’t already. Current quarterback ratings in the AFC North: Mayfield 96.6, Lamar Jackson 95.1, Roethlisberger 94.9, Joe Burrow 89.8.

Mayfield’s emergence, and the effects thereof, puts the Browns in a great position going forward. It’s a hitting-on-all-cylinders offense no opposing team wants to see now, or in the playoffs. Better yet, all the starters on offense, including the two run-and-stun running backs, Nick Chubb and Kareem Hunt, are under contract through next year (at least).

As the great Napoleon Dynamite once said, “That sounds pretty good.”

It does, for several reasons, chief among them is that, unlike a year ago at this time when the Browns’ lengthy to-do list included fixing the offensive line — virtually all of it — there are no holes that need fixing for next year.

That gives general manager Andrew Berry the luxury of not having to worry about any urgent needs offensively. Everything is already in place, and what’s in place Baltimore found unstoppable Monday night. Offensively, the Browns have above-average players at every position. Multiple players at some positions, stars included.

The defense is where the holes are, which was so gruesomely displayed in the latter stages of the Ravens rumble. Some of those holes will be filled by the eventual return of injured starters. But that’s a discussion for another day.

For now, the Browns will ride this season out behind an offense that will have to be their best defense. If you can’t stop the other guys, out-score ‘em. That’s what the Browns almost did against the Ravens, and will probably have to do against most of their remaining opponents, especially in the playoffs.

Monday night it almost worked, as a team that held the Browns to six points in the first game of the season, gave up 42 points in a game that to Cleveland was a loss that felt like a win.