Notes: Donovan Peoples-Jones built trust with Baker Mayfield during trip to Austin, has made big plays in big moments 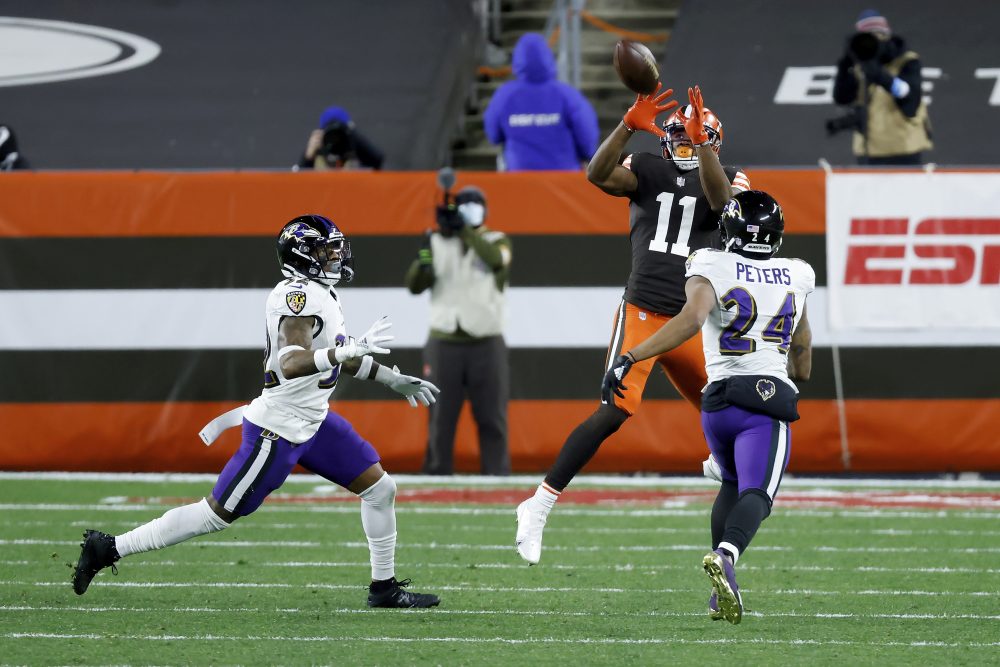 The Browns trailed by a touchdown with 1:51 left Monday night against the Ravens. They needed a big play to start the drive. Baker Mayfield didn’t hesitate to look to rookie receiver Donovan Peoples-Jones, a sixth-round pick out of Michigan.

Mayfield threw it down the left sideline, and Peoples-Jones made the back-shoulder catch for a 30-yard gain. Kareem Hunt scored three plays later.

Mayfield said the trust began to be built in May when Peoples-Jones was part of the group of skill positions players who visited Mayfield in Austin, Texas, and caught passes from him.

“He is all about his business. He shows up and does his job,” Mayfield said. “He wants to be coached. He wants that tough love. He wants that because he is striving to be better, and you can see that.”


Peoples-Jones was a healthy scratch for the first three games, has only 10 catches and might go back to No. 4 on the depth chart this week with the expected return of KhaDarel Hodge from a hamstring injury. But Peoples-Jones has made a large impact, including catching the winning touchdown at Cincinnati, and doesn’t shrink when the moment gets big. He had three catches for 74 yards Monday.

“I just keep continuing to do what I am put here to do,” he said Thursday. “Whatever it is and whatever my role is at any given time, I am going to be there for the team.”

He appreciated Mayfield’s invitation to Austin and its influence on the season.

“Really, just the first chance to get out there and throw with Baker meant a lot for me,” he said. “Always watching him when I was younger and finally getting to connect with him and throw with him and just be around him, I definitely think helped build confidence for both of us.”

The season hasn’t been entirely smooth for Peoples-Jones. He’s been replaced on kickoff returns by D’Ernest Johnson, is averaging only 4.5 yards on punt returns and dropped a would-be touchdown pass against the Titans. But he’s shown mental toughness throughout, including catching a 75-yard TD after the drop in Tennessee.

“Obviously I try to be perfect on every play, but that is not realistic,” he said. “There is always going to be a next play. I just try not to focus on the bad and just continue to keep getting better and continue to lock in and do my part.”

The Giants listed quarterback Daniel Jones (hamstring, ankle) as questionable after he was limited in practice again. Former Browns draft pick Colt McCoy seems likely to get the start.

“Me and Colt have the same financial adviser,” defensive end Myles Garrett said. “If he’s under center, I’m going to make sure to bust his a– and tell (the adviser) about it.”

“We know what they’ve got in both guys,” safety Karl Joseph told The Chronicle-Telegram. “We’ve still got to prepare to play the whole Giants. We’ll see what happens on gameday but we’re ready for whatever happens with that.”

** The Giants ruled out cornerback Darnay Holmes (knee). They’re also without No. 1 corner James Bradberry, who’s on the COVID list

Jarvis Landry says he “was not opposed” to coaching change after last season, as Browns react to news Freddie Kitchens will call plays for Giants

Safety Jabrill Peppers has come into his own in his second year with the Giants after being a key piece of the trade that sent Odell Beckham Jr. to the Browns. Peppers is a captain and has 74 tackles, 10 passes defensed, 2.5 sacks, an interception, a forced fumble and a fumble recovery. He’s averaged 11.8 yards on punt returns.

“I notice him a lot,” running back Nick Chubb said. “I know from him being here that he is scrappy, he is physical and he plays extremely hard. He is always near the ball.”

Peppers was the No. 25 pick of the Browns in 2017. He showed promise but was forced to play out of position and struggled with inconsistency. He was traded along with first- and third-round picks that became defensive end Dexter Lawrence and linebacker Oshane Ximines in exchange for Beckham in March 2019.

“I was at home, I was on Twitter, I seen it, I was actually excited about the trade. You know, I’m thinking, ‘S–t, we just got Odell,’” Peppers told Giants reporters Friday. “I keep looking and, ‘Oh, s–t, man, I’m not here no more.’”

Ravens coach John Harbaugh called Browns receiver Jarvis Landry a “great guy” but stood behind Ravens cornerback Marcus Peters in the dispute over whether Peters spat at Landry’s back during the game Monday night. Landry called Peters a “coward” and Peters denied it in a statement.

“No way would Marcus do that,” Harbaugh said. “I know Marcus really well. That’s not his style anyway. If he was upset, he wouldn’t be doing that. What he did was, he spat in that direction. It wasn’t in anybody’s direction, per se, and you could tell that on the clip.”

Ward is excited to be part of the team that’s finally brought a winner to his hometown.

“I feel that we are definitely changing the narrative of the Browns over the past years,” he said.

** Mike Tirico will replace Al Michaels on play-by-play for NBC’s broadcast of the game. Michaels hasn’t been cleared through COVID-19 protocols but said he feels great and doesn’t have symptoms.