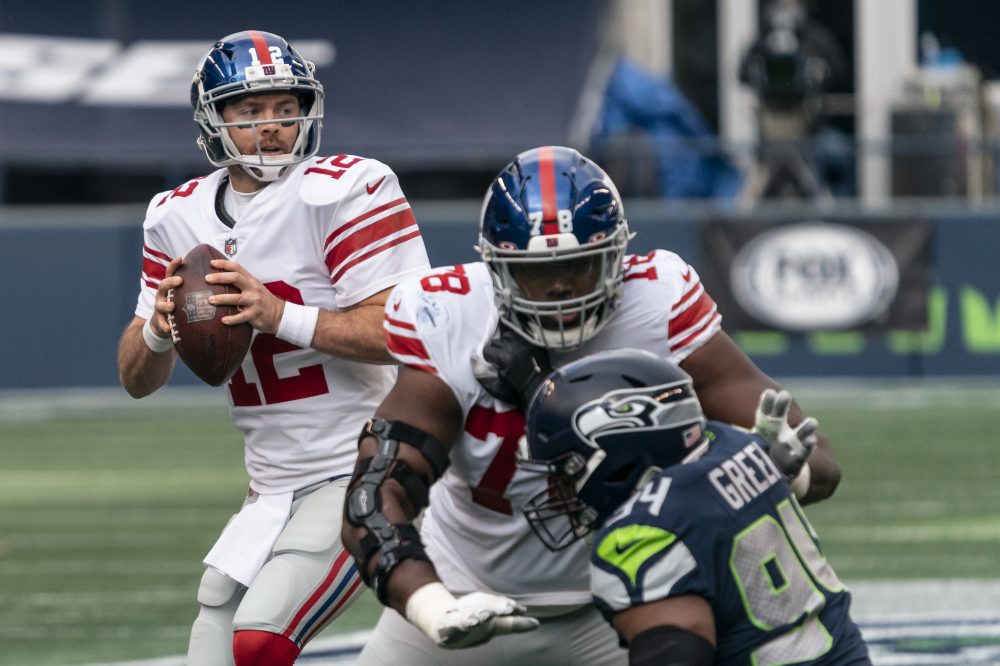 Quarterback Colt McCoy will get the start for the Giants in place of the hobbled Daniel Jones, according to multiple reports Saturday. McCoy was a popular player for the Browns after being drafted in the third round in 2010 by president Mike Holmgren. McCoy didn’t have much of a chance during his three years in Cleveland, going 6-15 as the starter. He’s stuck around the NFL as a backup despite average physical skills.

The Browns will face a limited Giants offense, because a healthy Jones is a big threat as a runner (403 yards, 7.3 average), creating space for running back Wayne Gallman. The Giants will still try to run, testing the inconsistent Browns run defense that has dropped out of the top 10 to 16th in the league (114.1 yards a game). After holding Tennessee’s Derrick Henry to 60 yards, the Browns allowed the Ravens to rush for 231 in the loss Monday night.

If the Browns can stop Gallman, that will create plenty of pass rush opportunities for Myles Garrett and the rest of the defensive line. The Giants allowed eight sacks last week to the Cardinals, so McCoy could be in for a long day.

The offensive line has been a huge part of the Browns’ turnaround and must be at the top of its game against the strong defensive front of the Giants. That task got tougher with road-grading right guard Wyatt Teller ruled out with an ankle injury. Chris Hubbard was solid in place of Teller earlier in the season, but he isn’t the same mauler.

The Giants run a 3-4 base system and make things tough on opponents with size and strength. Tackle Leonard Williams leads the way with 8.5 sacks and is joined by nose tackle Dalvin Tomlinson and end Dexter Lawrence. That’s 962 pounds of power for the Browns to try to displace. The Giants rank seventh against the run (101.5 yards a game), sixth per carry (3.9), tied for ninth in scoring (22.4 points) and 17th in passing (241.5).

“It’s going to be awesome,” NFL analyst Ross Tucker told The Chronicle-Telegram. “Their D-line is awesome. I love Tomlinson, Lawrence and Leonard Williams. I’m really looking forward to that matchup.”

“Leonard Williams does a great job there for them,” coach Kevin Stefanski said. “He is athletic. He can penetrate. He can play the run. He is a very, very good player.”

Receiver Jarvis Landry is as healthy as he’s been all season, and it shows in the numbers. He has 22 catches for 257 yards and two touchdowns in the last three games after 10 games without a touchdown or more than five catches. Play caller Stefanski and quarterback Baker Mayfield are getting him the ball early, and Landry is asserting himself as the clear-cut No. 1 wideout in Odell Beckham Jr.’s absence.

Landry has a great chance to keep up the hot streak against the Giants, who will be without No. 1 cornerback James Bradberry, who was placed on the COVID-19 list. New York’s stout run defense and the absence of Bradberry could spur Stefanski to throw the ball early and often. Landry always plays with great passion but might have even more fire after the spitting controversy with Ravens cornerback Marcus Peters.

If Landry has a big game or scores a touchdown, look for him to honor Beckham, who would’ve been bursting to play his former team in prime time.

Career sacks for defensive end Olivier Vernon, who has seven this season — all in three games — to rank second on the team.

Years since the Browns swept the NFC East in a season. They can do it with a win tonight.

Freddie Kitchens is denied revenge. The Browns’ offense is too explosive and the Giants’ is too limited, even if Kitchens pulls out all the stops as interim play caller. Browns 30, Giants 23.

Commentary: Don’t look now, but the Browns may have the best offense in the AFC North … thanks to Baker Mayfield
Commentary: Browns lucky to have calm, cool, collected Kevin Stefanski after string of coaching failures