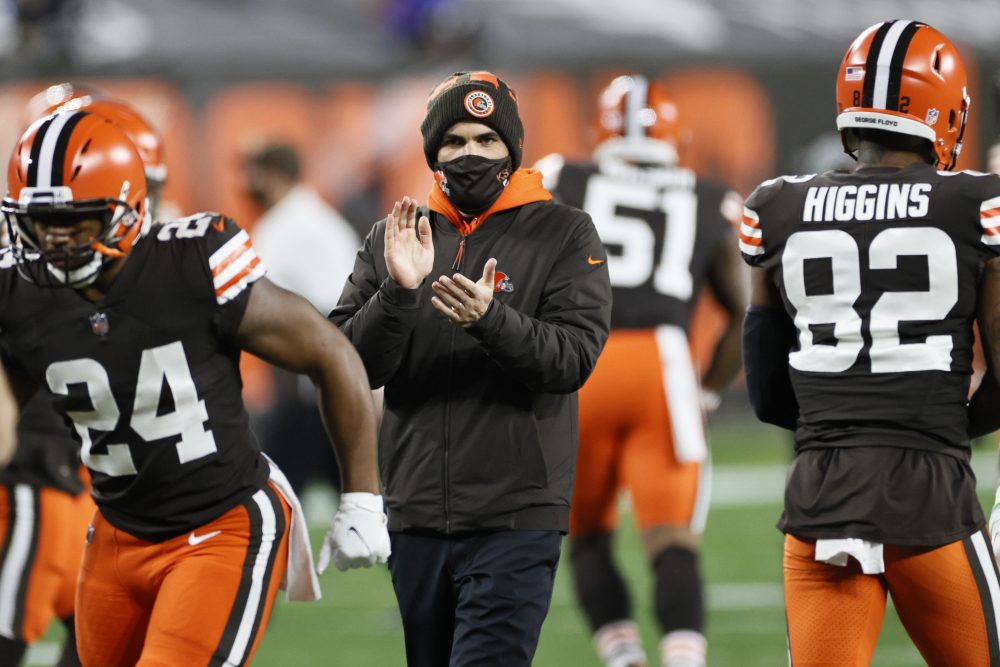 The Browns are so lucky to have Kevin Stefanski.

Fans knew this before the flurry of Freddie flashbacks — the Giants tight ends coach will serve as the interim play caller Sunday night against the Browns. But the in-your-face reminders should’ve expanded the appreciation.

Stefanski might’ve looked like an upgrade following any of the previous nine failed Browns coaches. And certainly after starting 9-4 and putting the Browns in great position to return to the playoffs for the first time in 18 years.

But the contrast with Kitchens — his disastrous showing from a year ago still fresh in the minds of Browns fans — is stark.

Stefanski is calm, cool and collected.

His composure has been critical as the NFL plays through a pandemic that’s caused seemingly nonstop disruptions and adjustments.

His even-keel personality was a guiding force after ugly early losses to the Ravens and Steelers and during a string of key injuries.

His offensive system is well-constructed and his play calls made with the proper combination of calculation and aggression. 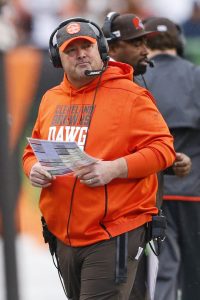 Freddie Kitchens is shown last season when he was coach of the Browns.
AP FILE

None of the above applied to Kitchens, who was undisciplined in wardrobe choice, play calling and interactions with players and media. His former players refusing to say something good about him this week speaks volumes.

The Haslams smartly pulled the plug after only a year, admitting the mistake and giving the organization the chance to move forward.

Stefanski has provided so much to like, there’s a variety of choices of what he’s done best.

Given the option of play calling or bringing stability to a dysfunctional organization, Ross Tucker didn’t hesitate to pick the latter in a phone interview with The Chronicle-Telegram.

“There’s a lot of good play callers out there. It just seems like the Browns don’t have any drama,” said Tucker, host of the “Ross Tucker Podcast” and analyst for the game on Westwood One’s national radio broadcast. “They don’t have any of the other stuff that seemingly always lurks around Cleveland. There’s none of the here we go again, same old Browns kind of stuff. He’s basically eliminated that in one year, which is amazing.”

Cris Collinsworth, who’ll be the analyst on NBC’s TV broadcast, was asked what’s most impressed him about Stefanski.

“His devotion to the analytics,” Collinsworth replied in an email to The Chronicle. “He almost beat the Ravens by going for it on key 4th downs and converting.  If he had played traditional football in those situations he probably would have lost by two touchdowns.”

I agree with Tucker’s answer but could also pick the development of Baker Mayfield or orchestrating an offense ranked 12th with 26.8 points a game, including seven games of 30 points.

Commentary: Don’t look now, but the Browns may have the best offense in the AFC North … thanks to Baker Mayfield

Stefanski has also built relationships with the players while earning their respect.

I don’t want to crown Stefanski too soon.

The Browns must finish the run to the playoffs, preferably with back-to-back wins in New Jersey that take the pressure off the finale vs. Pittsburgh. And it’s worth remembering Butch Davis took the Browns to the playoffs in his second season, way back in 2002, before his ego ran amok and the kingdom crumbled.

Stefanski seems too smart for that. He also is aligned with general manager Andrew Berry and chief strategy officer Paul DePodesta, which should eliminate the power struggles that doomed the regimes of Davis and others.

Even if Kitchens pulls a rabbit out of a hat Sunday night and the Giants pull off the upset behind backup quarterback Colt McCoy, that doesn’t change the big picture.

Stefanski the right man for the job. And he would’ve been a year earlier if then-general manager John Dorsey had listened to DePodesta’s recommendation.

Maybe the Browns would be a year further along in the progression. Then again, maybe not, given the issues Dorsey and his personnel department had with the analytics side of the building.

The fresh start was necessary and it’s already paid huge dividends. With a strong finish, Stefanski should be the NFL’s Coach of the Year.

That would be another reminder the Browns have come a long way from Kitchens.

Browns-Giants Preview: 3 things to watch, 3 key numbers, the prediction
Commentary: Kevin Stefanski and Baker Mayfield have made the amazing routine … and that’s remarkable