Mailbag: Will secondary be team’s downfall? What can defense do to stop Lamar Jackson? Was fourth-down blitz Monday too aggressive? 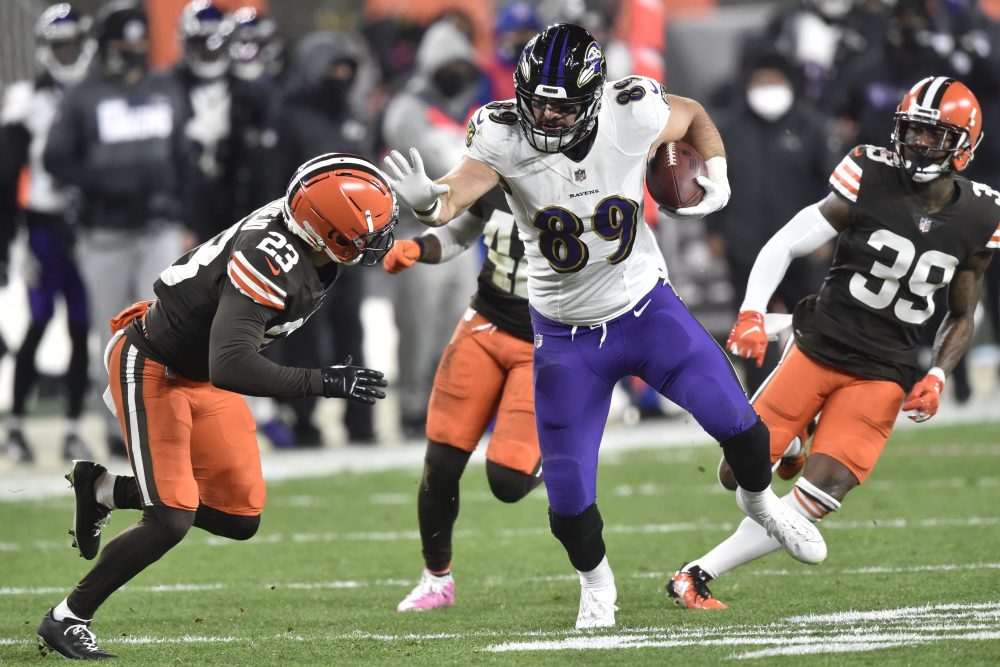 Q: The current starting defensive backfield bears little resemblance to the projected preseason starting 4. Will this position group be the ultimate downfall for the Browns if the team falters down the stretch?

A: It very well could be.

The return of cornerback Denzel Ward tonight against the Giants will be a huge help after he missed three games with a calf injury. The absence of a No. 1 corner playing at a Pro Bowl level affects everything about a defense, including the plays the coordinator can call. Coordinator Joe Woods can normally count on Ward to shut down a side of the field, and can therefore devote more resources to the other side. Without Ward, every part of the field feels vulnerable.

Getting back to your question, I don’t trust the defense, and that’s largely due to the secondary — but the linebackers shouldn’t escape blame. Every time I start to feel better about the defense, it lives down to my initial expectations. It gave up 25 points to Jacksonville, 28 in the second half to the Titans and couldn’t stop Lamar Jackson and the Ravens on Monday night in the 47-42 loss. I feel like the offense will carry the Browns to the postseason and give them a chance in any playoff game, but the defense will eventually cost them dearly.

I don’t want this to be all doom and gloom, so I can see a scenario in which the defense peaks at the perfect time. If strong safety Ronnie Harrison (shoulder) can make it back for the playoffs and Ward and nickelback Kevin Johnson (groin) return to 100 percent, the secondary is serviceable. Terrance Mitchell isn’t a Pro Bowler but has done well holding down the second corner spot in the season-long absence of Greedy Williams. The biggest problem is free safety Andrew Sendejo, who misses too many tackles and is too often out of position. The solution would be the defensive line, led by Myles Garrett, dominating down the stretch. A great pass rush can save poor coverage, and the Browns have the potential to change the game up front. They just haven’t been able to do it consistently enough.

Q: What will it take to contain Lamar Jackson? Could you put a more agile spy (e.g. a corner or safety) in the middle of the field to watch him on pass plays?  What about not leaving him uncovered on the option play since he is more of a play breaker than a running back?

A: I wish I had a good solution for you.

The athletic spy in passing situations is an option I would consider using more. Jackson’s speed and ability to elude tackles makes it difficult to leave one man responsible for following him all over the field, but the right spy would be a wrinkle worth trying.

And you’re obviously correct about not ignoring him on the option. Garrett was guilty of that on a long run in the third quarter, and I’d start my defensive game plan by doing all I could to contain Jackson as a runner and force the Ravens to beat you in a different way.

I think perhaps the best way to slow down Jackson is by rushing only four in a controlled manner, crowding the line with linebackers to stop the run and daring Jackson to throw downfield. The absence of Ward made that tougher to do.

Q: I was puzzled by the Browns rushing 6 defenders Monday on the 4th-down play that resulted in a long TD pass when Jackson returned. The Ravens contained those 6 pass rushers with 5 blockers thanks to Lamar Jackson’s rollout, leaving the Browns covering 5 receivers with 5 defenders. The Browns defense blitzes 21.8% of the time, one of the lowest percentages in the NFL. Do you think the Browns gambled that Jackson’s cramps left him vulnerable to a blitz? In general on Monday, the Browns seemed to take more risks. Are we witnessing the influence of the analytics department or were these just decisions in the heat of battle?

A: I don’t know how much the cramp factored into Woods’ decision to blitz. To me, it felt like he was trying to make Jackson make a quick decision after having been in the locker room for about a quarter. I’m OK with that call with the game on the line, but the execution was horrendous. The blitzers got pinned inside, allowing Jackson to easily get outside, where he excels. Then Mitchell bumped into another defender, allowing Marquise Brown to get behind everyone.

I would never downplay the prominence of analytics in all things Browns, I’m just not sure the role they played in that particular call. I think that’s more Woods trying to react to the flow of the game.

Q: Did anyone ask Kevin Stefanski why the lateral play at the end of the game instead of heaving ball downfield looking for a deflection, since Baker Mayfield threw it before half 70 yards? It’s a moot point now.

Also, do you think the NFL should incorporate AAFC stats to NFL stats? Even so, Otto Graham still only NFL quarterback to go to six straight championship games. That’s all lost, in my opinion, since the NFL is geared more to “Super Bowl” era.

A: No one asked Stefanski, but it’s an interesting thought. I’m sure he has a line of demarcation for when to throw a Hail Mary and when to try the series of laterals.

As for the AAFC stats, I don’t have any problem including them but wouldn’t expect the NFL to do so. The league is so focused on its recent history and uses the AFL-NFL merger as the starting point for many things. I’m glad you brought up Graham, the greatest of my Northwestern Wildcats. His 10 title game appearances in 10 years is one of the greatest accomplishments in sports history.

Q: Do they look to extend Kevin Stefanski’s contract during the offseason?

A: No. It’s too early. Obviously Stefanski looks like the long-term answer, but he’s only a year into a five-year contract. So there’s no need to address that yet. I’d say after the 2022 season would be the earliest chance for an extension.

A: I certainly agree. I find myself using it more in texts, so maybe that’s true for others and has infiltrated the news conferences.

Mailbag: Why hasn’t offense suffered without Odell Beckham Jr.? Is Denzel Ward already better than Joe Haden? How troubling are the cornerback injuries?
Mailbag: Will receivers on COVID list be cleared to play vs. Steelers? Who’ll call the defensive plays? How long can Nick Chubb, Kareem Hunt be content together?