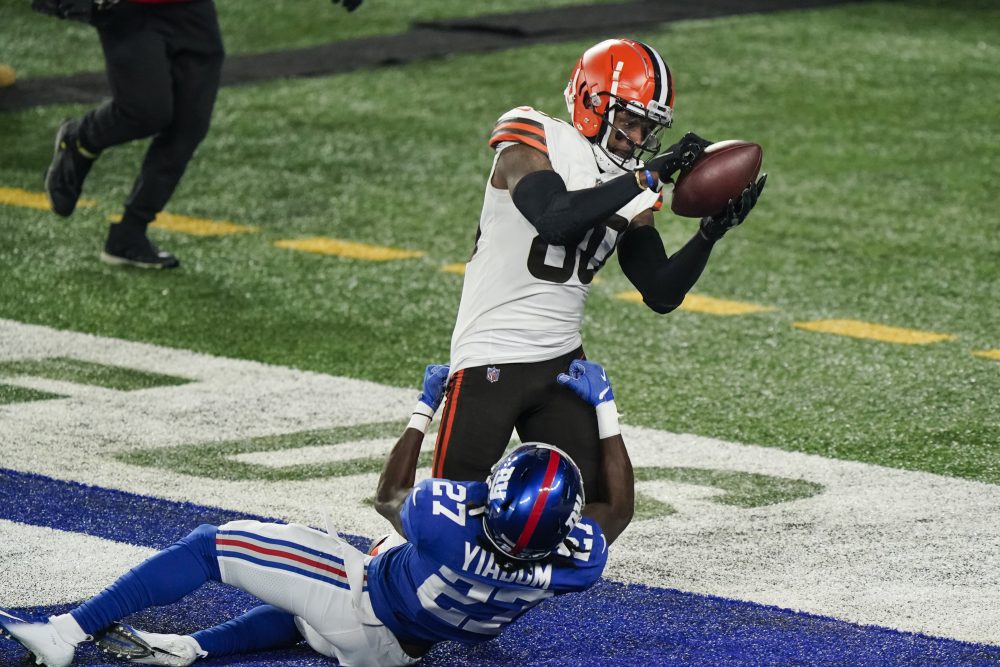 When the extraordinary becomes the ordinary, then all bets are off.

All bets are now off for this Browns season.

It wasn’t just that they beat the New York Giants 20-6 Sunday night. It was that they beat the Giants, late in the season, on a short work week, on the road, playing virtually the whole game with a third-string right guard, who played so well he looked as good as the two players ahead of him.

It wasn’t just that Baker Mayfield continued his second half of the season Joe Montana impression. It wasn’t that the defense that gave up six touchdowns just six days earlier gave up no touchdowns in the win over the Giants.

It also wasn’t that the Browns receivers made all of the tough catches, as well as all the easy ones, or that the offensive line protected Mayfield as though he was a family heirloom.

It wasn’t any of that individually.

It was all of that, collectively.

The extraordinary has become the ordinary.

They are 10-4, and riding in the express lane to the playoffs. The Browns are more than just relevant again. They’re a team again.

Call it the Stefanski Method.

Sunday night’s win over the Giants came in a game that had all the trappings of a potential letdown game. The painful loss to the Ravens was still fresh, the Browns were on the road, against an allegedly weak opponent, and in their first possession of the game, right guard Chris Hubbard, who was subbing for the injured Wyatt Teller, left injured.

The next man up was Nick Harris, whose name had been on the lips of exactly no Browns fans until he trotted onto the field and played four quarters without once having his named mentioned by NBC’s “Sunday Night Football” crew for a missed block, a sack of Mayfield, or as the guilty party on a major penalty.

Granted, the Giants (5-9) were playing without their starting quarterback, Daniel Jones, and their star running back, Saquon Barkley. But the Giants WERE, amazingly enough, playing for a spot in the playoffs, despite their spotty record.

So this Browns win didn’t come against a team that was counting down the days until golf season.

Stefanski, in fact, may have single-handedly saved Mayfield’s career. He’s helped mold Mayfield from a cocky, careless gunslinger into a cocky, nearly flawless gunslinger, who is playing with the confidence and calculated abandon of a leader.

For Mayfield, the extraordinary has become the ordinary, which is easily the most important development in this Browns season. So far.

His numbers are great, but his leadership is greater. Sunday night against the Giants he led the Browns on TWO 95-yard touchdown drives, one of them took 10 plays in 4:55, the other 14 plays in just over eight minutes. Oh, yeah, there was also a 13-play, 75-yard touchdown drive in six and a half minutes.

These weren’t quick-strike, big-play drives to and through the red zone. These were methodical, go-ahead-try-and-stop-us marches specifically designed to send a crystal-clear “Who’s your daddy?” message.

The Browns’ receivers, who were best known for their many drops pre-Stefanski, have likewise risen to the moment this season, making better and more consistent catches as the season progresses. Mayfield’s bull’s-eye percentage is also getting better, it seems, every time he takes the field.

In their last four games, the Browns have scored an average of 33 points. And their next opponent, the Jets, have given up the fourth-most points in the league.

Under Stefanski the Browns have blown right past the transition season in which a team goes from awful to not awful.

The Browns have gone from awful to wonderful in the span of 14 games. It’s not supposed to happen this quickly. That it IS happening this quickly is an indictment of all those failed coaches, and those who hired them, prior to Stefanski’s arrival.

The NFL is a league designed to turn weak teams into rugged ones quickly, a trend that the Browns have steadfastly ignored for too many years.

Welcome to the end of too many years.

Had the Browns stubbed their toe and lost to the Giants, Cleveland’s playoff chances would have taken a major hit. Stefanski and Mayfield refused to let that happen.

The red-hot Jets, winners of one in a row, are next on the schedule, and that should send the Browns into their regular-season finale against the Steelers with a record of 11-4.

Commentary: Browns lucky to have calm, cool, collected Kevin Stefanski after string of coaching failures
Jim Ingraham: Steelers seemingly headed down just as Browns are on the rise