Defense rebounds, keeps Giants out of end zone, but Myles Garrett still having trouble breathing after bout with COVID-19 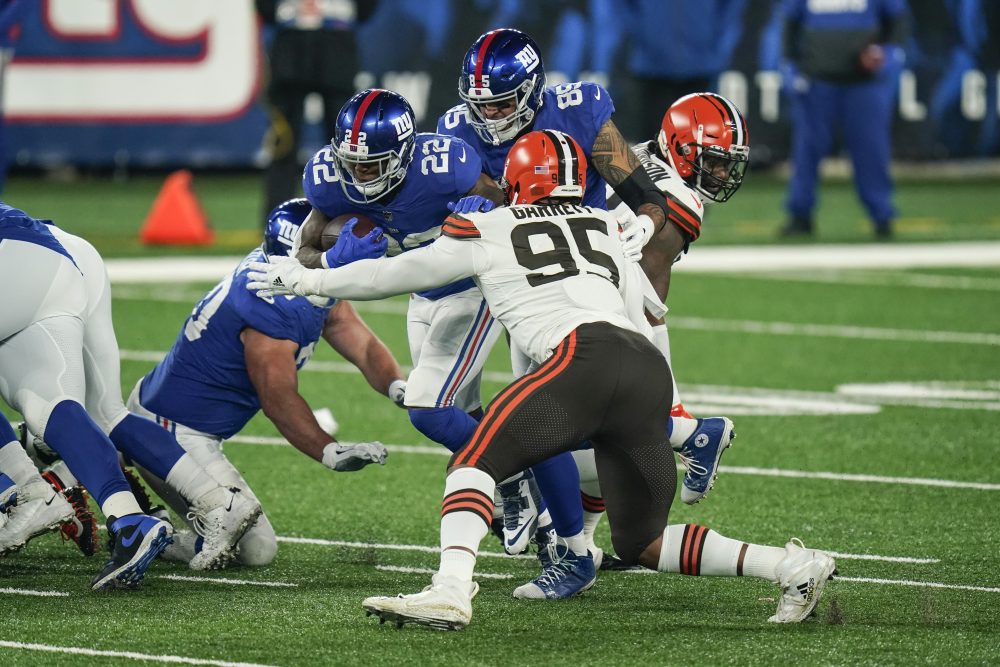 Fresh off giving up a season high in points (47) in a loss to the Ravens, the Browns defense was looking for a little redemption.

Cleveland responded with its best performance in terms of points allowed, including two fourth-down stops in the red zone to set the tone early during a 20-6 win over the Giants on Sunday at MetLife Stadium in New Jersey.

Cleveland entered Week 15 ranked last in the league in defending fourth downs, allowing 20 conversions in 23 attempts. Las Vegas was the only other team allowing opponents to convert at least 85 percent of the time, and next highest was Minnesota at 68.2 percent. The league average is 57.1 percent.

“It’s about bend don’t break,” defensive end Myles Garrett said. “We’re trying to keep them off the board, but at the end of the day we’re trying to have more points than they do. Whatever we have to do to get a W in that win column we’re going to do it. It’s nice to be able to keep them out of the end zone, but at the end of the day a dub’s a dub however we’re going to get it.”

Garrett — who entered Week 15 among the league leaders with 10.5 sacks — continues to work his way back into form after a difficult bout with COVID-19. Sunday was his third game back after missing two. He finished with four tackles and a half-sack but said he had a coughing fit after the game.

“I’m just trying to get water into my system and be able to breathe,” Garrett said. “Taking those big breaths are tough right now. That shortness of breath turning into a cough or just getting choked up. You just have to find a way. It’s about desire. No matter how I feel, I’ve got to do something on the field.”

The potential revenge game started off strong for the former Browns duo as New York marched down the field on its opening drive predominantly using a no-huddle offense. McCoy overshot tight end Evan Engram on third down from the Cleveland 5-yard line and New York looked to be settling for a field goal. Instead, the team motioned into a trick formation, resulting in an incompletion by holder/punter Riley Dixon.

“Special teams was able to defend that play and then hands team, I know it was not perfect but came through again for us,” Browns coach Kevin Stefanski said, referring to a late onside kick. “I was pleased with those guys.”

New York bounced back with another trip to the red zone, but the Cleveland secondary did a good job of preventing a touchdown. On second-and-11, McCoy had Engram open, but safety Karl Joseph made a good read and recovery on the back side to catch the tight end and break up the play. On third down McCoy challenged cornerback Denzel Ward, who broke up a shot to Darius Slayton.

The Giants settled for a 37-yard field goal and a 3-0 lead, but Cleveland closed out the half with 13 unanswered points.

The Giants tested Ward early after he missed the last three games with a calf strain.

“I like the ball coming my way and getting the opportunity to make plays on the ball,” Ward said. “So I was fine with it if that was their game plan.”

The Browns were able to build their lead thanks to another fourth-down stop in the red zone. New York marched right back down to the Cleveland 14 after the Browns took a 7-3 lead. McCoy couldn’t connect with Slayton on second down, but Dion Lewis gained 4 yards to set up fourth-and-2 from the 6.

Richardson left the game in the second half with a neck injury, but Stefanski said the X-rays came back negative. Garrett said Richardson was laughing and joking after the game.

“He looked pretty good to me,” Garrett said. “I don’t know what the prognosis is right now, but seeing him walk around with a smile on his face is a good enough sign to me.

“He is a big-time player. That is why he is here. We see him do it time and time again, and I expect nothing less out of him.”