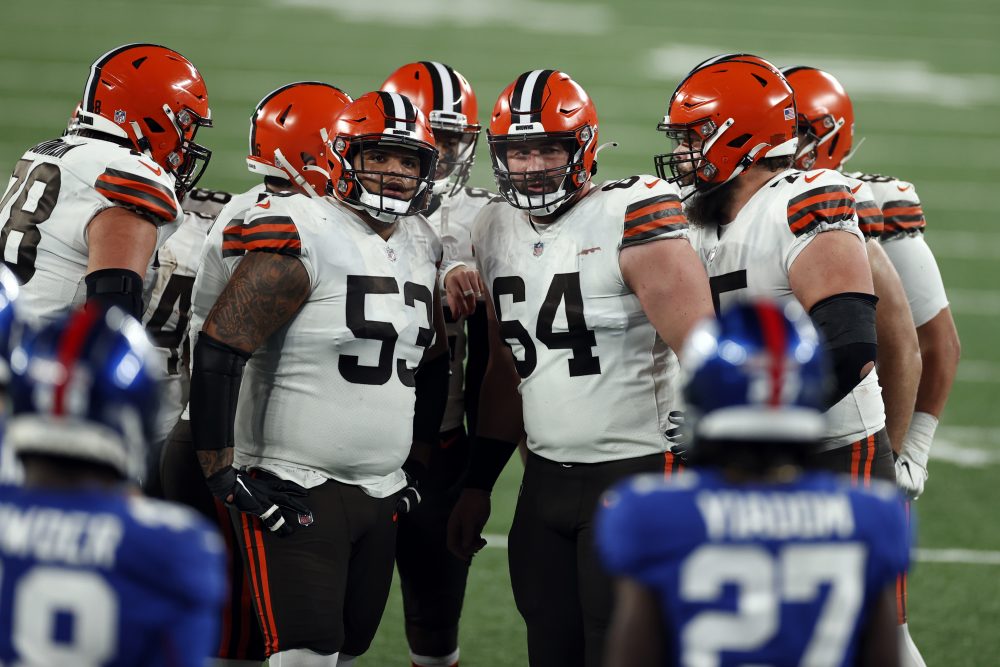 The experience was new for Nick Harris.

The rookie’s debut had come almost three months earlier protecting on kicks, but his true introduction to the NFL was on the third offensive snap Sunday night against the Giants.

Harris began the night as the backup at center — his natural position — and at guard because starting right guard Wyatt Teller was inactive with a sprained ankle. When replacement Chris Hubbard’s right knee crumpled on the second play, Harris was suddenly in the huddle in prime time for his first professional offensive snap, at right guard. Standing shoulder to shoulder with center JC Tretter and right tackle Jack Conklin, who’ve made 142 starts, Harris filled in admirably in a 20-6 victory.

“Just to be playing offensive line in the NFL and that being my first game, it was crazy,” Harris said Monday.

When Harris was a true freshman at the University of Washington, he was moved from center to guard and started four games. He stayed at guard as a sophomore and was honorable mention All-Pac 12, then moved to center and was first-team All-Pac-12 in both seasons.

The Browns, drawn to his quick feet, athleticism and intelligence, drafted him in the fifth round in April.

“I just have to go about it how I did in college. Just continue to just keep getting better, keep grinding, just keep my focus on the right path, just build off of what I did in this game and keep stacking the days pretty much.”

Harris will have the chance to do that in the middle of the action as the Browns pursue their first playoff appearance since 2002. Coach Kevin Stefanski said Teller is unlikely to play Sunday against the Jets, remains “week to week” and Harris will take his spot.

This week will be the first time he’s devoted his attention and preparation primarily to guard. He was the first-team center throughout training camp while Tretter recovered from knee surgery, then spent the season working as the backup center and a scout-team guard.

Harris is undersized at 6-foot-1, 302 pounds and more experienced at center but is confident he can handle the new job.

“At the end of the day, it is football,” he said. “I played guard my first two years in college so it is not like it is completely foreign. It is just knocking the rust off.

“When I went in, I had to warm up a little bit. For a couple of plays, I had to get my feet right and get my hands right because it is a different game than playing center. A lot of that goes unnoticed. I just had to get my feet wet a little bit and just play how I play. I felt comfortable, and as the weeks go by and I get more reps and stuff, it will feel even better, just so I can get comfortable.”

He took it upon himself to be prepared to play center and guard even though he hadn’t been called upon until Week 15. Stefanski said he wasn’t surprised Harris handled himself well when he got the chance.

“Did his job,” Stefanski said. “Played hard. Assignment sound. Got people on the ground. Really pleased with how he performed.”

“He kicked a–,” Landry said. “That is something that does not go unnoticed. I just wanted to let him know that personally, that I was proud of the way he came out and did what he had to do for the team.

“He stepped up, stepped in and did what he had to do. The offense continued to flow as is. That was something that was very special.”

Landry told Harris he appreciated him and the way he works.

Harris appreciated the gesture from Landry.

“It means a lot,” he said. “He comes into the facility every day and he works. He works hard. That is one of the dudes I look up to on this team. I try to model how I go about my career like him.

Harris said he has a lot to clean up after his first game. He has big shoes to fill, as Teller remains Pro Football Focus’ top-graded guard in the NFL.

“I just have to keep preparing like how I have been preparing,” he said. “Not trying to switch anything up. Not trying to do too much. Just go in there and play how I play.”