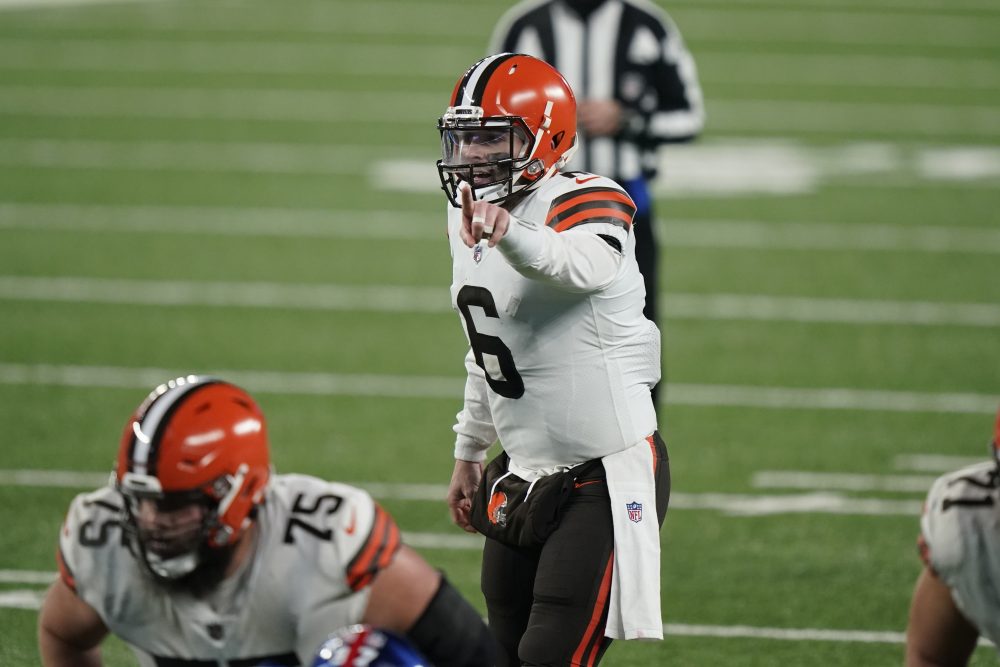 BEREA — Baker Mayfield is better running play-action. He ranks third in the NFL with a 121.3 passer rating after faking a handoff, according to Pro Football Focus.

He’s better protecting the ball. He cut his interceptions to eight from 21 last year.

He’s better putting the ball where he wants. He’s bumped his completion percentage from 59.4 to 64.0.

With Mayfield on the hottest streak of his three-year career, he’s also shown to be better at navigating the waves of an NFL season.

“He is the same,” running back Nick Chubb said. “He is the same guy, no matter what is going on. Even when things are not going good, he is still Baker.”

Mayfield, who’s in his third season, said that wasn’t always the case.

“That is something that I tried to learn early on. Obviously I was not able to do that last year, but that is very important,” said Mayfield, who admitted to doubting himself a year ago. “You do not want to change. You want to be the same leader each day.

“I saw a quote of somebody from Tampa talking about Tom Brady that it does not matter how good he is playing or if it is not going well, he is always the same person. That is important to be a leader. During the good stuff, they are always looking up at you. During the bad stuff, they are going to look at you, as well. It is key to find that medium.”

He seems to have found it at the right time. The Browns have won five of six, are 10-4 and on the doorstep of the playoffs. In the last four games, Mayfield’s completed 70.2 percent for 1,232 yards, 10 touchdowns, an interception and a 117.7 rating.

“Anything outside the building, I don’t think he listens to,” backup quarterback Case Keenum told The Chronicle-Telegram in a phone interview. “I hear a lot of it, I hear a lot of the negativity, I hear all this stuff.

“He’s been the same since I’ve met him. And that’s probably my favorite thing about him is he is the same guy every day, and that’s refreshing to be around and I think the guys gravitate to that. He’s one of the best leaders that I’ve been around in this league.”

Mayfield’s playing like one of the best quarterbacks, too.

“He’s playing well, he’s getting the ball where it needs to be,” Keenum said. “His eyes are great, his feet are great, he’s making really good decisions, being really smart with the ball. And he’s making big plays on a big stage and at a good time.

“To be playing this well this late in the season when the games really matter, it’s really fun to watch. I’ve got a pretty good seat. I just get to know what the play is before you all do. It’s even more fun to know what’s happening before.”

Mayfield’s 99.4 rating is third in franchise history for a season, the Browns are 15-1 in his career when he has a 100 rating in a game and he’s the first Browns quarterback since Brian Sipe (1979-81) to have 250 completions and 3,000 yards in three straight seasons.

Mayfield has often referred to this season being “night and day” from 2019, when the Browns went 6-10. The description also applies to his play. He ranked 31st last year in completion percentage (59.4) and rating (78.8).

“Obviously not turning the ball over helps,” he said. “Eliminated a lot of negative plays. I said my job is to get the ball out quickly and get it to the playmakers and put us in position to win.

“Yeah, there are a lot of differences, that is for sure.”

Mayfield plans to take time over Christmas to reflect on the difficulties of 2020 for society and the good times that could lie ahead for the Browns if they can reach the playoffs for the first time since 2002.

“It has been a tough year,” he said, referring to the pandemic. “Just having a little quiet time at the house is going to be great and just to make this extended push because this will be the first time that I am not planning offseason trips as soon as New Year’s Day hits.

“It is a different year all around. Just taking it one day at a time, quite honestly.”

Northeast Ohio trees are certain to be surrounded by boxes filled with Browns gear. That’s what happens when the area’s favorite team is winning — and even when it’s not.

Mayfield can sense the joy the Browns are bringing to people.

“In some ways, yes. In others, no,” he said. “It is obviously not the typical year. With protocol, you can’t go out to restaurants and hang out and be around the town. Obviously there is no tailgating and not as many fans at our home games.

“It is just different. You can kind of sense it, but I do not think it is the full effect.”

While Mayfield sits in front of the tree, he’ll have the tunes spinning.

“Big Christmas music guy,” he said. “I am old school. I am a Nat King Cole guy.”

Nick Harris is new to life in NFL but has experience being pressed into action at guard
Keeping the faith: Team chaplain Robert Brooks is missed inside Browns headquarters but makes ministry work from a distance in 2020