Notes: After six years of losing, Joel Bitonio thankful to be 10-4 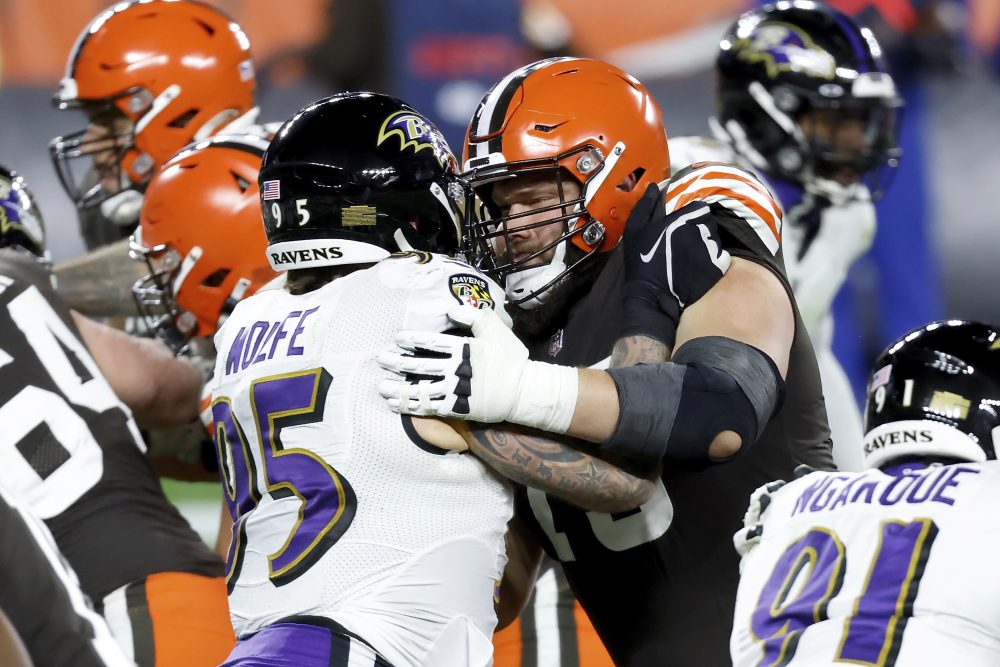 For the longest-tenured member of the Browns, there’s no question 10-4 tastes sweeter after all the losing.

“You get here and you go through some tough seasons, and I was telling my wife the other day, it took me like four years to win 10 games at one point, where it was just so long,” Bitonio, a second-round pick in 2014, said Thursday. “To experience a winning culture and just be on a winning program for once, it is something you want to be a part of and you dreamed of being a part of.

“It has been really fun this year, and we have a lot to go. We are still trying to fight to get in the playoffs, and we are just trying to beat the Jets this week.”

“Big picture, to get to 10 wins and to start that turnaround and hopefully start a winning culture here in Cleveland where it is like every year this team is battling for the AFC North and playoff contention and the goal is to win Super Bowls eventually, that is what we are fighting for,” Bitonio said. “To be a part of the turnaround, it is one of those things where you are going to look back and, man, there are some dark days there, there are some things where you do not remember what winning was. And now, I do think you enjoy the wins and the experiences just a little bit more when you have been through that.”

Bitonio was voted to the Pro Bowl on Monday for the third straight year, the first time as a starter. He’s the first Browns guard to make three straight since Hall of Famer Gene Hickerson made six in a row from 1966-71.

“I know he is a great player, a Hall of Famer. He is on the wall in the indoor,” Bitonio said of the field house. “Anytime you are in the same sentence as some of the Cleveland Browns greats from those teams back then is pretty special.”

“I definitely do. I would put our line up against guys across the league,” Van Pelt said. “We have a very good offensive line across the board really, and Joel anchors that group up front. His play has been outstanding this year. He is physical in the run game. He is very good in pass protection. He is really a complete player up front, and he is a great leader for us, too.”

The Browns see defensive end Myles Garrett progressing as he continues to recover after a serious bout with COVID-19 last month. He’s played three games after missing two but said after the game Sunday he had a coughing fit and had difficulty taking deep breaths.

“He has gotten in better football shape the last couple of weeks,” defensive coordinator Joe Woods said. “I do not notice it as much in practice because we rotate guys. In the game when you get those long series and it gets into the fourth quarter, a lot of those guys look winded. Just based on our conversations, he is fine.”

Stefanski said the Browns will continue to be smart with how they use Garrett in practice and the games.

“He continues to work hard,” receiver Jarvis Landry said. “Even today, he was getting back to the quarterback and we are having to stop practice pretty much because he is so disruptive. That is part of who he is. He is a tough player, he loves the game of football, he loves this organization and he loves this community. That is something he has a lot of pride in.

“Him playing through whatever he is going through, it does not surprise me. We are grateful to have a guy like that who is willing to put the team before himself in a sense, but mostly we want him to be healthy to be able to help us.”

Commentary: Steelers seemingly headed down just as Browns are on the rise

Safety Ronnie Harrison (shoulder) is expected to miss his fourth straight game despite returning to practice Wednesday. Coach Kevin Stefanski said Harrison looked good, but the plan is to give him another week before playing in a game.

“Just because he just got back on the practice field,” Woods said.

Karl Joseph will continue to start and played his best game of the year against the Giants.

** Free safety Andrew Sendejo practiced fully Wednesday and Thursday after missing a game with a concussion. Woods said he’ll return to his starting role after Sheldrick Redwine filled in against the Giants. They may rotate.

THIS ONE’S FOR YOU

Landry flashed 1-3 with his fingers after catching a touchdown pass vs. the Giants to honor fellow receiver and best friend Odell Beckham Jr., who started his career with the Giants and is out for the season with a torn anterior cruciate ligament.

“He loved it. Especially against that team and that we got the W,” Landry said. “All smiles from him. Good spirits.”

Landry said the Browns are playing for Beckham.

“He is a Cleveland Brown,” he said. “When we have success, he is a part of it, regardless of if he is here or not. He knows that, and he is cheering us on from afar and doing the things that he needs to do to be able to get back here next year.”

After benching linebacker Mack Wilson and making him a healthy scratch against the Giants, the coaches expect him to be back on the field against the Jets.

“He is locked in and ready to roll,” Stefanski said.

“He has practiced well this week,” Woods said. “He is part of the plan.

“Just continue to work hard, make plays on the practice field and translate it to gameday.”

“Everybody love you when you balling but when you fall you see the real them,” the post read. “Im only getting better. No steps backwards. #TheMarathonContinues”

B.J. Goodson is the leader of the linebackers room and has been counseling Wilson.

“I have been talking to him and making sure he stays positive,” Goodson said. “I have kind of been in a situation similar. Just telling him and teaching him and learning from what I have gone through in my past was something that I think that he definitely picked up, and he took the information the right way.”

A GREAT DAY AT THE OFFICE

“Yesterday was a dream. I love you, Wyatt Teller!” she posted on Instagram with a ring emoji.

After she said yes, the giant scoreboard showed a congratulatory message.

“I heard about it. I have not seen it yet,” Van Pelt said. “Anytime you have a chance to make a special impact like that and doing it is pretty cool.”

Stefanski spent the last of the 14 padded practices permitted during the regular season Wednesday. He chose to use it this week rather than before the finale vs. Steelers on Jan. 3, which could decide the AFC North.

** Special teams coordinator Mike Priefer didn’t let kicker Cody Parkey off the hook for missing an extra point against the Giants that was pushed back to 48 yards by a taunting penalty on Landry.

“He has to make that kick — there was no wind, it was a beautiful night — and he knows that,” Priefer said.

** Landry loves his role as the emergency quarterback.

“I get my four plays every Saturday that I honestly live for and these guys live for,” he said of the weekly walkthrough.