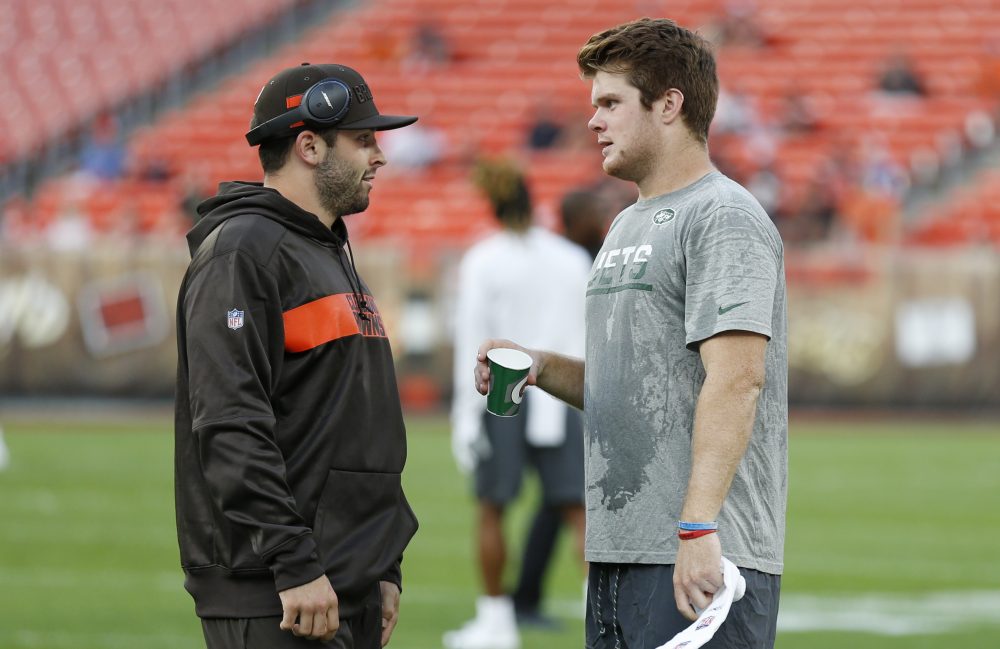 Baker Mayfield and Sam Darnold were the first quarterbacks taken, Nos. 1 and 3, but have been upstaged by other members of the deep 2018 quarterback draft class. Baltimore’s Lamar Jackson (No. 32) was the MVP last season, and Buffalo’s Josh Allen (No. 7) won the AFC East this year and is playing like a future MVP. Mayfield and Darnold have some catching up to do, but only one seems capable.

Mayfield is playing the best football of his career and has risen to 11th in the NFL in passer rating (99.4). He’s regained all the confidence he lost during his Year 2 struggles — and then some — and has the Browns on the verge of ending a 17-year playoff drought. He’s thrown 15 touchdowns and one interception since his first pass in Cincinnati on Oct. 25, and has a 117.7 rating over the last four games. He should be able to keep it up against the Jets, who’ve allowed opposing quarterbacks to complete 70.6 percent and post a 104.5 rating.

“The ups and downs of the past almost three years now of taking that step from college to the NFL, I definitely feel for what Sam is going through and has gone through,” Mayfield said. “I am not in his shoes so I know I am not there for the day-to-day stuff, but I know the responsibility and pressure that he is under. You feel for him. You want it to work out. Sam is a good guy, and I hope for the best for him.”

The biggest lesson in their diverging career paths is that coaching matters. Mayfield is a new man under the guidance, and in the system, of Kevin Stefanski, who’s accentuating his positives while making his job easier. Darnold has been dragged down by the ineptitude and instability of Adam Gase, who most likely has two games left in his head coaching career. Darnold will need an influence like Stefanski as he tries to save his career.

Fifth-round pick Nick Harris was the latest rookie to make a significant contribution, filling in at right guard against the Giants last week for all but the first two snaps. He’ll start again vs. the Jets in place of Wyatt Teller, who’s out with a sprained ankle. Harris wasn’t overwhelmed by being thrust into action and handled himself well against the oversized, physical defensive front of the Giants.

That type of performance has become a trend for the rookie class. First-round pick Jedrick Wills has started all year at left tackle, third-round defensive tackle Jordan Elliott is part of a rotation, third-round linebacker Jacob Phillips missed time with a knee injury but started his second game against the Giants, fourth-round tight end Harrison Bryant has nine starts, 21 catches and three touchdowns and sixth-round receiver Donovan Peoples-Jones has 13 catches, including the winning touchdown in Cincinnati.

“It is a team effort in that regard,” Stefanski said, starting with general manager Andrew Berry. “Andrew and his staff do an outstanding job to identify the type of players who fit what we are about here and fit our scheme. The coaches work really hard to develop these young men. All that being said, there is a want-to from each of these guys that wants to get better and wants to continue improving, and that really is half the battle.”

DEEP (IN HIS CAREER) IMPACT

Frank Gore deserves better than the Jets. The 37-year-old running back has been the workhorse, starting 13 games and rushing for 605 yards and two touchdowns. He is obviously in no rush to retire and sounds as if he wants to play again next year if someone will have him. His longevity and production should send him straight to Canton five years after he does decide to hang it up.

He’s third in NFL history with 15,952 rushing yards, trailing only Emmitt Smith (18,355) and Walter Payton (16,726). He’s rushed for 500 yards in 16 straight seasons, tops in NFL history and three more than runners-up Payton and Smith. He is one of three players with a 500-yard season over the age of 35 — he and Marcus Allen have two and John Riggins one.

“It is incredible. I am a big fan of Frank Gore,” Stefanski said. “Watching him over the years, just a tough runner, always makes the right read and always falling forward. I have never met him, but everything I have read about him and the people who have coached him just talk about the type of player he is and what type of person he is. I have the utmost respect for Frank Gore.”

The Browns’ inconsistent run defense (12th, 111.2 yards) needs to contain Gore and force the Jets to throw. That would allow Myles Garrett and the defensive line to get after Darnold and a suspect offensive line. If that happens, sacks and turnovers should follow.

Touchdowns for Nick Chubb and Kareem Hunt, the first pair of Browns running backs to reach double digits since Leroy Hoard (11) and Kevin Mack (10) in 1991.

The Browns had their world turned upside-down Saturday and will be without six key contributors, including their top four receivers. But the Jets are awful and the Browns motivated to make the playoffs. Browns 24, Jets 17.

Jim Ingraham: Steelers seemingly headed down just as Browns are on the rise
Commentary: A weekend and loss like this could only happen to the Browns