Commentary: A weekend and loss like this could only happen to the Browns 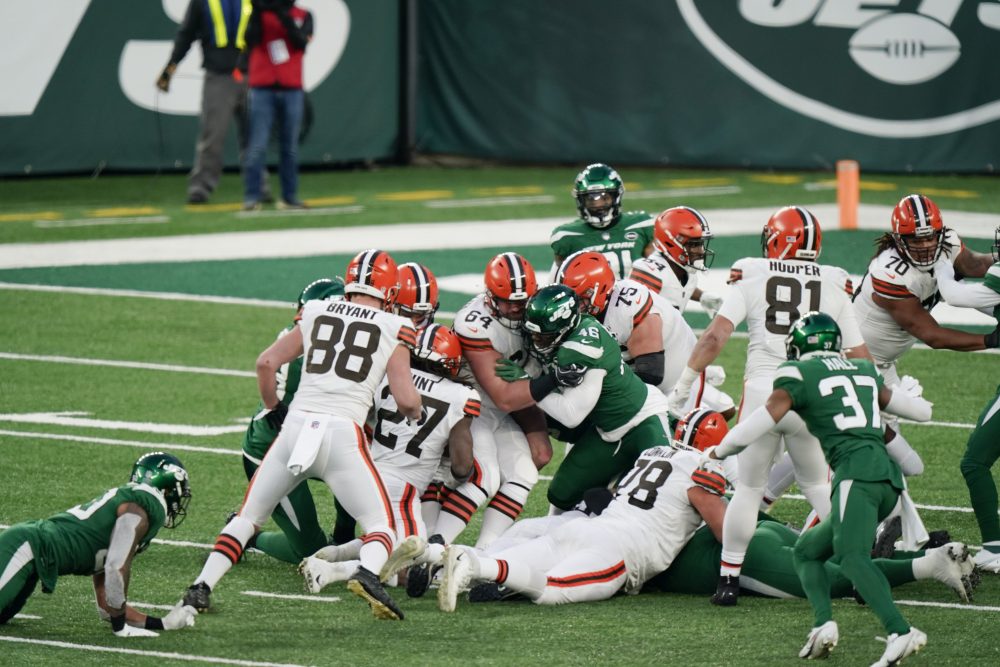 If something like this was ever going to happen to a team in the NFL, it could only be to the team that it happened to.

Because this is how we roll in these parts, where the worst-case scenario has a habit of getting even worse, at the worst possible time.

Just when everything seemed to be falling so deliciously into place, the Browns cough up a giant fur ball.

Against that team? Under these circumstances? With a season’s worth of effort and excellence about to be rewarded with a trip to the playoffs for the first time since the Browns place-kicker routinely kicked balls THROUGH the uprights, not off them, they produce not a victory, but a fur ball?

In their long and storied history — believe it or not, kiddos, they once had a storied history — the Browns have never had a more tumultuous 24 hours than the 24 that ended with Baker Mayfield’s third fumble of the day in a frantic 23-16 loss Sunday in New Jersey.

After the game, when they realized the magnitude of this particular fur ball, the Browns were lining up to take responsibility for their no-show.

“I got outcoached. We got outplayed,” said outcoached coach Kevin Stefanski.

“I did not play my best game, and I am one of the reasons we lost the game,” said outplayed cornerback Denzel Ward.

“Plain and simple, I put three balls on the ground,” said outplayed quarterback Baker Mayfield, who attempted a career-high, and whopping, 53 passes. “I didn’t step up and play at a high level. This one’s on me.”

Baker Mayfield after fumbling 3 times in loss to Jets: “I have to hold onto the damn ball. I failed this team.”

The pressure’s on all of them now, because they were unable to win the most winnable game on their schedule, losing to the one-win New York Jets.

Granted, the Browns were playing without two injured starters on their offensive line, plus their top four wide receivers and two starting linebackers due to COVID-19 protocol.

That’s either bad luck or bad judgment, but it shouldn’t have mattered when playing a team that didn’t win its first game of the year until almost Christmas Eve.

Yet the Browns lost to them.

Had they won, the Browns would have clinched their first trip to the playoffs since 2002. Instead, they coughed up the organization’s biggest fur ball since the league started documenting fur ball cough-ups sometime in the mid-60s.

Finding out that you’re losing your four top receivers the day before the game is also a big deal because it removes a big chunk of the game-planning that went into the game.

On the other hand, the Browns were playing the Jets, whose record two weeks ago was 0-13.

The Jets, of course, knew the Browns would try to lean on their running game, because the Browns top receivers were back in Cleveland watching the game on TV. So the Jets defense loaded the box to stop the running game, which they did.

But the Jets were also the Jets, whose record two weeks ago was 0-13.

“They dared us to run the ball and we did not execute well enough,” said Browns guard Joel Bitonio. “They beat us up and stopped the run.”

They also stopped the euphoria that surrounded the Browns, who came into the game having won five of their previous six games with Mayfield playing better than at any time in his career.

So even allowing for the missing personnel, this was, on paper, one of the best teams in the league against arguably the worst.

Even with all the chaos surrounding the team in the previous 24 hours, the Browns took the field knowing if they won and Indianapolis lost, the Browns would clinch a playoff spot.

But the Browns coughed up a fur ball.

The low point in utter desperation, although it’s a crowded field, came when they attempted a 61-yard field goal — by their punter! And nobody in Cleveland complained because kicker Cody Parkey has been knocking paint off goal post uprights for much of the last month.

If there’s a silver lining, it’s this: The Browns don’t play the Jets next week.

Browns-Jets Preview: 3 things to watch, 3 key numbers, the prediction
Commentary: Browns had to make it tough on themselves, didn’t they?