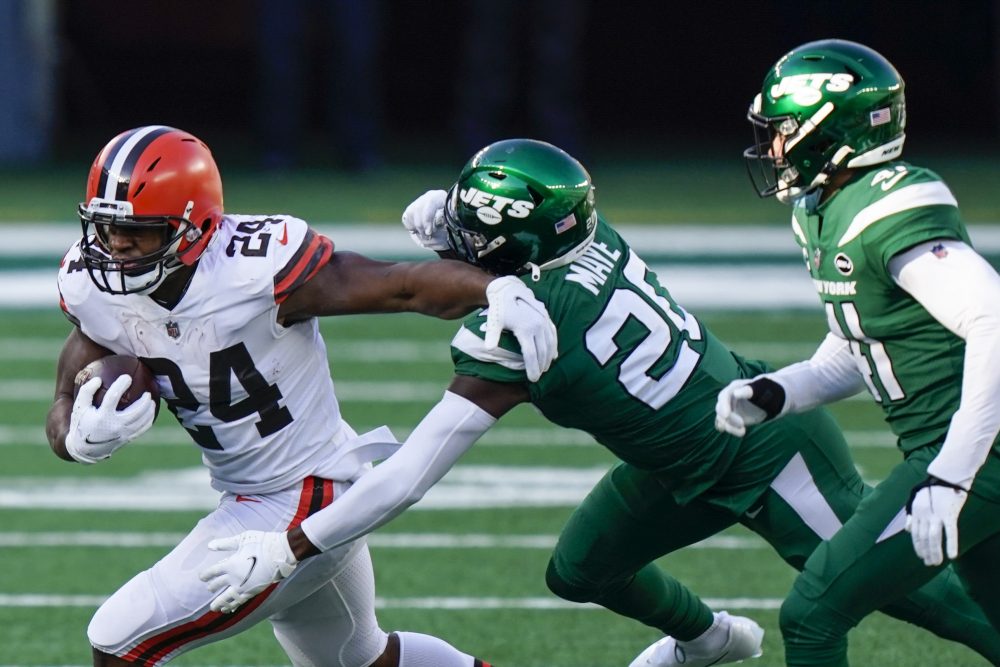 For one of the few times this season, the Browns couldn’t lean on the run.

Short-handed up front, Cleveland struggled to mount a ground game against the Jets in a 23-16 loss Sunday. After entering as the NFL’s third-ranked rushing attack with 152.6 yards a game, it was held to 45.

“We just did not execute the game plan,” left guard Joel Bitonio said. “They called a jam front. They covered up the center and the two guards. They dared us to run the ball, and we did not execute well enough. They beat us up and stopped the run.

“We went to the pass, and it kind of got us going a little bit in the second half. It is unfortunate. You want to come out and try to establish the run, especially when you do not have those receiving threats that are normally out there. We did not do a good enough job executing. They beat us up there.”

Not having two starting linemen was a big reason the rushing attack was stuck in neutral, as right guard Wyatt Teller and rookie left tackle Jedrick Wills were ruled out. Teller missed his second game with an ankle injury, and Wills was held out due to COVID-19 protocols because he had symptoms. He hasn’t tested positive.

Lamm practiced with the starters Thursday and Friday after Wills was placed on the COVID list as a close contact of someone who doesn’t work for the team who tested positive. Wills was activated from the list Saturday, flew separately to New Jersey as a precaution, then was downgraded to out Sunday with the illness. He started the first 14 games.

The Jets took advantage of the changes, stuffing the running game and sacking Baker Mayfield four times — the most allowed since Pittsburgh got to Mayfield four times in Week 6. Cleveland’s offensive line entered Week 16 having allowed just seven sacks in the last eight games and one in its last three.

Coach Kevin Stefanski was not going to use the unavailable players as an excuse.

“It had nothing to do with the guys that we did not have,” he said. “We got flat out beat and flat out outcoached with the players we had, myself included.”

The special teams had a few big moments, but not all of them were good.

Cleveland blocked two kicks — a field goal and an extra point — for the first time since Week 4 of 2009 against Cincinnati and the third time since 2000. The Browns have three blocks this season, tied for second in the league.

Defensive tackle Sheldon Richardson made both blocks, the first an extra point to keep the deficit 13-3 and the second a 50-yard field goal attempt in the third quarter with the Jets leading 20-3. He was the game captain as chosen by Stefanski.

Richardson’s second block helped negate a major special teams blunder three plays prior. The Jets had punted on fourth-and-11 from the 50-yard line, but Jovante Moffatt was flagged for roughing the punter, giving New York 15 yards and an automatic first down.

Browns kicker Cody Parkey missed an extra point for the third straight game. The miss came at a critical moment that kept the Jets lead at 20-16 to start the fourth quarter.

Commentary: A weekend and loss like this could only happen to the Browns

Several lineup changes were necessary after six players were placed on the COVID-19 reserve list Saturday.

Receivers Marvin Hall and Ja’Marcus Bradley started in place of Jarvis Landry and Rashard Higgins. Donovan Peoples-Jones and KhaDarel Hodge, the Nos. 3 and 4 receivers, are also on the list, as the four receivers were deemed close contacts to middle linebacker B.J. Goodson, who tested positive.

Derrick Willies was the third receiver after being elevated from the practice squad but didn’t contribute on offense.

** Tae Davis replaced Goodson in the base defense before leaving with an ankle injury. Malcolm Smith replaced him.

** Sione Takitaki replaced Goodson in the nickel package before leaving with an ankle injury.

** Mack Wilson replaced Jacob Phillips, who was also a close contact of Goodson, as the weakside linebacker in the base defense.

** With all the absences, Elijah Lee played in the fourth quarter.

** With Peoples-Jones out, running back D’Ernest Johnson returned punts as well as kickoffs.

Baker Mayfield after fumbling 3 times in loss to Jets: “I have to hold onto the damn ball. I failed this team.”

Landry has only known playing every week and catching a bunch of passes during his seven years in the league. He missed his first game after 110 straight to open his career and was stuck at home.

“Wishing I was with the DAWGS,” he posted before the game. “Today LFG Bring That Energy !!!”

He didn’t stop until the game was over, tweeting encouragement to the offense and defense. If Landry continues to test negative for COVID-19, he’ll be eligible to return to practice during the week.

Wishing I was with the DAWGS Today 😤😤😤😤 LFG Bring That Energy !!!

Nick Chubb led the way on the ground with 28 yards and a touchdown on 11 attempts. He needs 41 to reach 1,000 for the season despite missing four games.

** Chubb tied a career high with five catches, for 38 yards.

** Cornerback Denzel Ward set a career high with 18 passes defensed on the season.

** Olivier Vernon had a sack, his eighth since Week 8.

** Landry wasn’t fined for a taunting penalty last week vs. the Giants.

** Lee was fined $4,853 for unsportsmanlike conduct against the Giants.

Notes: After six years of losing, Joel Bitonio thankful to be 10-4
Notes: Kevin Stefanski credits Jets, blames self for struggles of run game that led to 53 passes