Baker Mayfield says playoffs start now, he lives for these moments and he’s used to having his back against wall 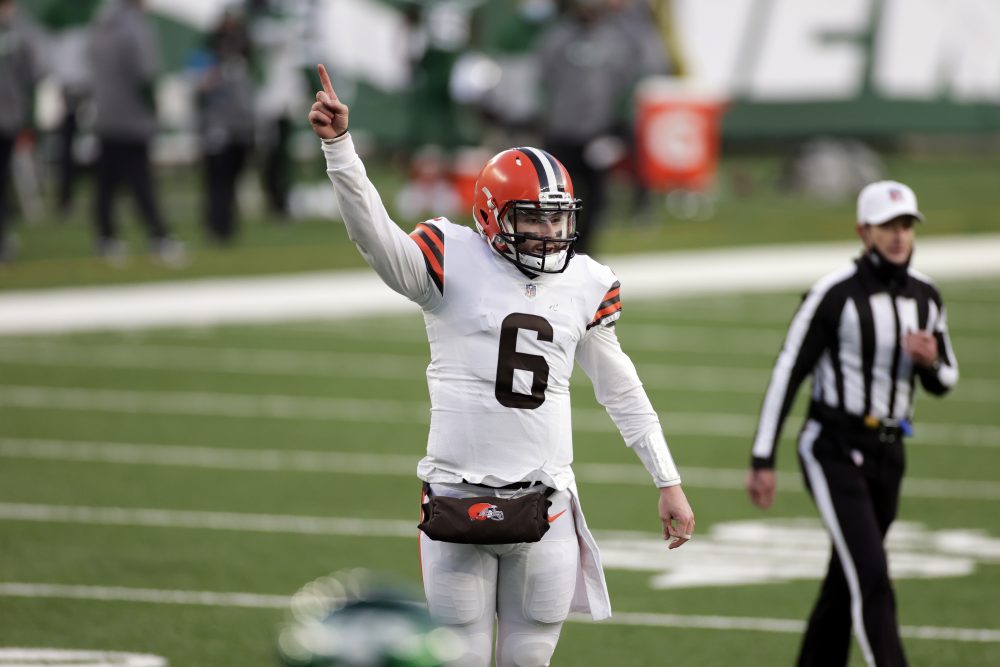 Baker Mayfield doesn’t intend to let a second chance to grab his first NFL playoff berth slip through his fingers.

He said his costly three fumbles in the 23-16 loss to the Jets are behind him and he’s eager for this week’s finale vs. the Steelers.

“Just to be honest with you guys, the mentality here is we’re in our playoffs just one week early,” he said Wednesday. “It’s win or go home. That’s the mentality for our guys.

“We have the talent, we have the scheme, we just have to go out there and execute it and do our jobs. And when we’ve had success this year that’s been the case.”

“Everybody here has worked so hard for these moments right here and for these games to truly matter so we just have to seize the moment.”

The Browns (10-5) hadn’t won 10 games since 2007. They haven’t been in the playoff since 2002. So no one on the roster has faced this type of pressure while a member of the organization.

“This game definitely means a lot to this team and to this city,” running back Nick Chubb said. “We all understand that so we are all pumped up for it.”

Because his teammates appreciate the magnitude of the moment, Mayfield doesn’t feel he has to stress the point.

“There’s no need to add any pressure,” he said. “It’s just about us going and doing our job.”

He didn’t do his well enough against the Jets.

He was hamstrung by not having his top four receivers, who were placed on the COVID-19 reserve list Saturday, but still managed to throw for 285 yards on a career-high 53 attempts. But the first two fumbles led to 10 Jets points, and the last one came on a fourth-down sneak with 1:25 left at the Jets 16-yard line.

“I’ve had my back against the wall many times in my life,” he said. “I think I handle that type of stuff correctly. So just one day at a time until Sunday. I can’t win it right now. I have to move on from the game and work to get there.”

Mayfield said he put the Jets game behind him when he went to bed Sunday night. His teammates saw the Mayfield they wanted Wednesday.

“Baker is good. Baker is dialed in. Baker is ready to go,” center JC Tretter said. “Had a great, great group of meetings, talked through all of our looks and our checks, and we had a good little shorter practice but a really crisp practice.”

The Steelers’ No. 2-ranked defense (19.2 points per game) will require Mayfield to protect the ball and be on top of his game, especially if coach Mike Tomlin plays most of the starters rather than resting them. The Steelers lead the league in just about everything, including sacks (52), takeaways (27), opponent quarterback rating (75.6) and quarterback hits (8.8 a game).

Mayfield is 1-3 against the Steelers, completing 56.8 percent for 688 yards (172 a game), six touchdowns, four interceptions and a 76.5 rating. He’s been sacked 12 nines, including nine in the last two meetings.

The 38-7 loss Oct. 18 in Pittsburgh was particularly painful. Mayfield played through a cracked rib, took a pounding and was pulled by coach Kevin Stefanski to avoid more punishment. Mayfield started the game by throwing a pick-six and finished 10-for-18 for 119 yards, a touchdown, two interceptions, four sacks and a 54.9 rating.

“It starts with me taking care of the ball,” he said when asked about what the offense needs to do better. “We have to establish the run game. Just overall, there are so many things that when we watch that game we could have done better, but you do not want to dwell on that. It comes down to the fundamentals of what our identity is.”

Mayfield had the best four-game stretch of his career — 1,232 yards, 10 TDs, an interception — before the loss to the 2-13 Jets. Stefanski has liked the development and resilience of Mayfield and the team all year.

“I see a guy who works very, very hard at his craft,” he said. “I think you have a chance when you work hard at your craft. He has had some unbelievable moments in this season, and he has had some plays that we all want back and he has bounced back.

“He has done a nice job. Just all of the things you don’t see — from a leadership standpoint and from a preparation standpoint — he has been outstanding.”

The last 73 teams to start 10-4 have made the playoffs, according to The Athletic, but the Browns would be in danger of breaking the streak with a loss to the Steelers. Is a playoff berth necessary to solidify the progress made in this turnaround season?

“We are not trying to solidify anything besides our win-loss record,” Mayfield said. “We are trying to get onto the next one. The ultimate goal is playing that second weekend in February. That is what we want to do. We are not looking for approval. We are looking to win games and take care of business.”