Before another big matchup, looking back at 10 memorable moments from 70 years of the Browns-Steelers rivalry 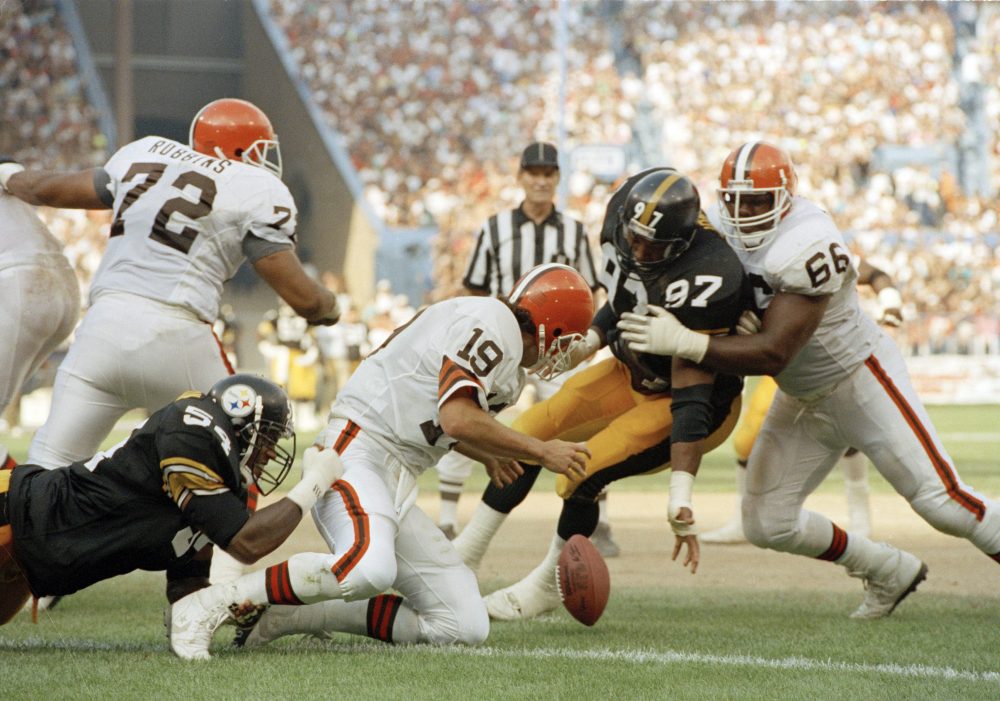 The Browns-Steelers rivalry hasn’t been much of one since Cleveland returned as an expansion team in 1999. Pittsburgh has won 34 of the 42 matchups with one tie, while the Browns have just five wins since 2001.

The domination includes a 38-7 beatdown from Ben Roethlisberger and the Steelers on Oct. 18 at Heinz Field.

But prior to ’99, when it was a true rivalry, there were plenty of memorable moments. Good and bad.

The Browns can create another good one with a win over the Steelers at FirstEnergy Stadium today. Though Big Ben won’t suit up, a victory over Pittsburgh would be a meaningful one since it would clinch Cleveland’s first playoff appearance since 2002.


Here are 10 memorable moments from the turnpike rivalry:

By now, nearly everyone has seen the video of Browns star Myles Garrett ripping off Steelers quarterback Mason Rudolph’s helmet during a skirmish and slamming it upon Rudolph’s head at the end of Cleveland’s 21-7 home win last year. Garrett later said Rudolph used a racial slur, the quarterback denied it and Garrett was suspended for the remaining six games — the longest suspension in league history for a single on-field incident.

Ironically enough, the two will meet again today when Rudolph replaces a resting Roethlisberger. The incident brought to mind another incident from the past — in 1976 Cleveland defensive lineman Joe “Turkey” Jones body slammed Hall of Fame QB Terry Bradshaw during an 18-16 win at Municipal Stadium.

Few have played a bigger role in the rivalry than Steelers linebacker James Harrison. In 2010, his vicious hits on Cleveland’s Joshua Cribbs and Mohamed Massaquoi during the Steelers’ 28-10 win in Pittsburgh knocked both out of the game and left them with concussions. Neither play was flagged, but Harrison was fined $75,000 for the hit on Massaquoi.

Afterward, Harrison said coach Mike Tomlin presented him with an envelope of cash, presumably to pay for the fine. Tomlin denied that and Harrison later rescinded the claim. 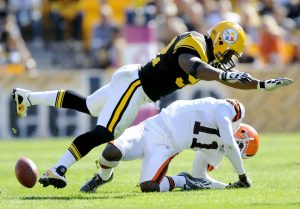 But Harrison wasn’t done knocking out Cleveland players. The following season, Harrison nearly decapitated Colt McCoy, leaving the quarterback with a concussion and himself with a one-game suspension.

“Maybe they need to check their helmets,” Harrison later said.

Oh, and before all that, when a Browns fan ran onto the field during a game in Cleveland in 2007, Harrison picked him up and threw him to the ground.

Confident they can handle the pressure, Browns look to take next step in turnaround by securing playing spot with win over Steelers

2004 was a very good year for the Steelers. Not so much for the Browns. Cleveland had the opportunity to draft Roethlisberger, but instead took tight end Kellen Winslow Jr. with the sixth overall selection.

Big Ben went No. 11 to Pittsburgh and the rest is a horrific history for the Browns. Roethlisberger is still behind center with the Steelers, owning a 29-3-1 record against Cleveland during his tenure, including a 17-0 mark at home.

Meanwhile, the Browns have used 27 starting QBs since 2004.

The teams are also in complete contrast in the head coaching continuity department. Pittsburgh has had three since 1969 — Chuck Noll, Bill Cowher and Tomlin — with Noll and Cowher having ties to the Browns. Over the same time, Cleveland has had 21 coaches, hoping it has finally found a lasting one in Kevin Stefanski.

In their last playoff appearance in 2002, the Browns led 17-7 at halftime in a wild card game in Pittsburgh, but Tommy Maddox led the Steelers to 29 second-half points to overcome a 17-point deficit after Cleveland scored early in the third quarter.

Pittsburgh scored the winning touchdown in a 36-33 decision with 54 seconds remaining. Prior to the Steelers’ final drive, Dennis Northcutt had a critical drop on a play that would have given the Browns a first down and the opportunity to run out the clock and preserve the win.

Maddox threw for 367 yards, three touchdowns and two interceptions, but Cleveland QB Kelly Holcomb was even better with 429 yards, three TDs and one pick.

Replacing an injured Holcomb, backup Tim Couch led the Browns to a 33-13 road victory in a Sunday night game in 2003. Cleveland hasn’t won in Pittsburgh since.

Couch (20-of-25 for 208 yards) threw for two touchdowns — to Andre Davis and Kevin Johnson — and ran for another in the first half. Daylon McCutcheon returned one of Maddox’s two interceptions for a 75-yard TD. 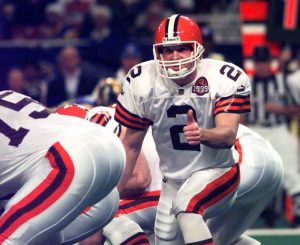 In this file photo from 1999, Browns quarterback Tim Couch signals. He was the last Browns QB to win in Pittsburgh in 2003.
AP FILE

The win snapped a six-game skid to the Steelers, giving coach Butch Davis his first win over Pittsburgh in six tries. It was also just Cleveland’s sixth win in 36 games visiting the Steelers since 1970.

The Steelers welcomed the expansion Browns back to the NFL with a 43-0 shellacking in the season opener in 1999. It was about what one would expect from a franchise playing its first game, with Cleveland turning the ball over four times, managing only two first downs to Pittsburgh’s 33 and being outgained 464-40.

It was one of only two wins for the Browns that season.

With fourth-year coach Bill Belichick at the helm in 1994, the Browns lost twice to the Steelers — 17-10 in Cleveland and 17-7 in Pittsburgh. But at 11-5, they finished a game behind the first-place Steelers and notched their last playoff victory, a 20-13 win over New England, Belichick’s future team, in front of 77,452 fans at Municipal Stadium.

Guess who the Browns got in the next round? Yep, the Steelers, who turned the trifecta, whipping Cleveland 29-9 and eliminating the Browns from the playoffs.

Belichick was fired after going 5-11 the next year before taking over the Patriots in 2000 and winning the first of his six Super Bowl titles the following season.

After replacing Marty Schottenheimer as Browns coach, Bud Carson made his debut in 1989 and the result was a 51-0 walloping of Noll and the Steelers in the season opener in Pittsburgh.

Noll said, “It was the worst I’ve ever seen as a coach.” Carson joked that it was all downhill from here, and he was right as far as the rivalry was concerned, with the Steelers beating the Browns 17-7 in the rematch.

Still, Cleveland won a playoff game before losing to Denver in their last trip to the AFC title game.

With quarterback Bernie Kosar at the helm, the Browns ended their Three Rivers Stadium jinx in 1986 after 16 straight losses, beating Pittsburgh 27-24 for the first time since the stadium was built in 1970.

“Now I can retire,” tight end Ozzie Newsome said. “The frustration is over. I’m overjoyed.”

Earnest Byner scored the winning touchdown on a 4-yard run with 8:30 remaining before Pittsburgh QB Mark Malone fumbled and defensive back Chris Rockins recovered at the Browns 29-yard line.

Cleveland also got a 100-yard kickoff return for a touchdown from Gerald “Ice Cube” McNeil with 58 seconds left in the first half.

The jinx has returned for the Browns, who have lost 17 straight in Pittsburgh.

Things changed in the mid-’70s when the Steelers racked up four Super Bowl titles from 1974-79 and beat the Browns 11 times in 12 games.

Cleveland turned the tables with 11 wins over 14 games from 1983-90, including seven straight.

Pittsburgh reasserted its dominance in earnest starting in 1994, winning seven straight and going 42-7-1 leading up to today’s showdown with the playoffs on the line for Cleveland.