Commentary: Browns had to make it tough on themselves, didn’t they? 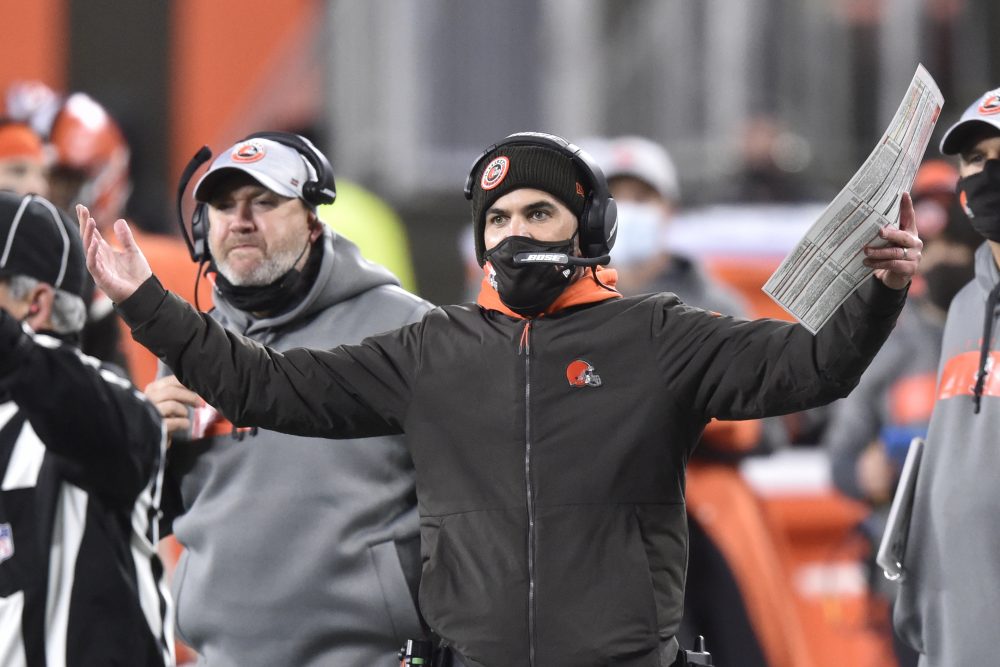 Meanwhile, Browns fans are this close to losing their marbles.

This season cannot end the way it’s in danger of ending — can it?

If the Browns thought the pressure was on them to beat the hapless and nearly winless Jets — the NFL’s worst team since your 0-16 Browns of 2017 — they ain’t seen nothing yet.


Sunday the Browns will attempt to avoid losing to Slingin’ Mason Rudolph and the Pittsburgh Steelers. It’s (almost) win-or-go-home, but only for the Browns. The Steelers are going to the playoffs regardless of what happens.

Not so for the flop sweat-soaked Browns. If they lose — and don’t get the right help — they are not just going home, they’re going for counseling.

How many pup-pup-pup-p’s in “pressure”?

Hey, relax, fellas! If all else fails, at least you can count on Cody Parkey!

Nothing to see here, folks. Only the most important Browns game in this century.

Oddly, the Browns are exactly where they want to be, and exactly where they didn’t want to be. With one game left in the regular season, they still have a shot at the playoffs. Of course, they could have already punched their ticket to the postseason party and eliminated the pressure gauge attached to the Steelers game had they beaten the Jets, a harmless ball of yarn that other teams have toyed with, but was an unsolvable Rubik’s Cube to the jittery, fidgety Browns.

If you didn’t know better, you’d think this was a franchise that hasn’t reached the postseason since 2002.

Let’s just say that Kevin Stefanski, who in the Jets game coached as poorly as his players played — grabbing your head with both hands in disbelief after one of your quarterback’s three fumbles is never a good look for the man in charge — has some ground to make up as well.

Given what he was given — a franchise lost in the woods and devoid of leadership — and given where he’s taken it in his first year on the job, Stefanski would still get my vote for Coach of the Year.

But it would be harder to bang the table for his candidacy if he coached the Browns right up to the playoffs doorstep, only to be turned away because, in the last two games of the season, they lost to a pitiful Jets team and an inferior (by their standards) Steelers team using a backup quarterback.

Put it this way: By 4:30 p.m. on Sunday, it will either be the most exhilarating day for the Browns since they returned to the NFL in 1999, or it will be the most morose.

Steelers coach Mike Tomlin said ancient and creaky quarterback Ben Roethlisberger won’t play in the game. Call it load management. That’s great news for the wobbly Browns, who, over the last 16 years, have found managing Roethlisberger to be a load. A handful of other key Steelers also won’t play as Tomlin, wisely, wants to give some of his heavy lifters a day off since for Pittsburgh it’s nothing more than a meaningless pre-postseason game.

What we have here, then, is a game that means absolutely nothing to one team and absolutely everything to the other team.

When the Browns fumbled away the Jets game, they ratcheted up the stakes for the Steelers game. So while Tomlin’s troubadours can sashay through Sunday’s soiree, the Browns’ bowstrings must be tightened to play-like-your-hair’s-on-fire rigidity.

Because there is no tomorrow.

Well, actually there is, but this game calls for full cliche usage.

The Browns have painted themselves into the uncomfortable corner of having to avoid the embarrassment of missing the playoffs because they lost their last two games, one to a team that doesn’t need to win and another virtually incapable of winning.

On the other hand, this is also an opportunity for the Browns, and their rookie head coach, to make a final rebounding, resounding, statement — even if it is against the Steelers’ junior varsity.

Erasing the memory of Jetsgate with a rousing, playoffs-ticket-punching victory over Pittsburgh would put an exclamation point on a Browns season that deserves it.

Regardless of what happens in the playoffs, just getting there, with a record of 11-5, three years after 0-16, would be validation that Browns ownership has finally gotten it right.

That the latest new coach and front office are all keepers. That Baker Mayfield can be what he was drafted to be. That the franchise has finally emerged from its own primordial ooze of repeated failures into the sweet sunshine of success.

There is no NFL franchise more deserving of a happy ending than this one, and there’s only one best way to provide it:

Kissed off the left upright.

Commentary: A weekend and loss like this could only happen to the Browns
Browns-Steelers Preview: 3 things to watch, 3 key numbers, the prediction