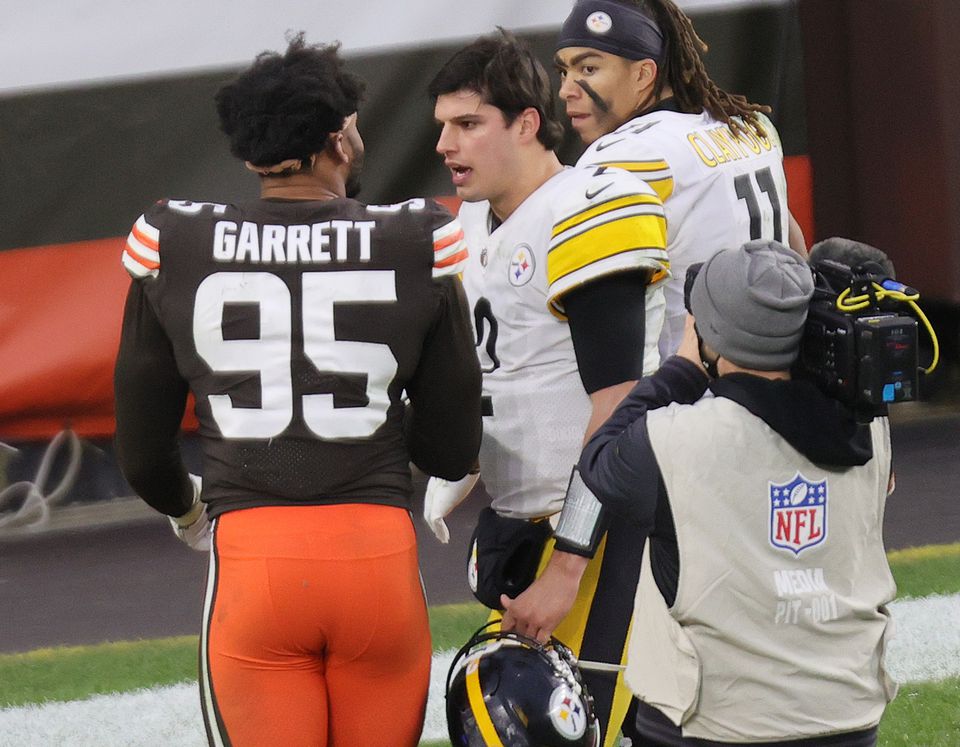 But this time it was only to exchange pleasantries.

Garrett ran over to Rudolph after Cleveland’s 24-22 victory Sunday at FirstEnergy Stadium and the pair chatted amicably before Rudolph disappeared into the Pittsburgh locker room.

“I just told him good game — he played a hell of a game — and we will see you all in a week,” Garrett said.

It was the first interaction between the two since Garrett was suspended for the final six games of the 2019 season after hitting the backup QB in the head with Rudolph’s own helmet. Garrett had just sacked Rudolph during the Browns’ 21-7 home victory and alleged Rudolph uttered a racial slur, which ignited the brawl.

The pair seemingly has put the controversy to rest.

“Myles came over and said, ‘Good game,’ and that is all it was,” Rudolph said when asked about the postgame meeting. “I told him good luck and that I had a lot of respect for him.”

Rudolph — playing for resting starter Ben Roethlisberger — completed 22 of 39 passes for 315 yards and a pair of touchdowns in Sunday’s loss, while Garrett finished with four tackles and a pass defensed.

“He played tough,” Garrett said. “He played very well, and he kept them in it to the very end. Had to show a little praise that he did well in this game and he was able to make some big plays for them.”

Rookie receiver Donovan Peoples-Jones was ruled out with a concussion after taking a huge hit to the back at the end of the first half.

He leaped to catch a pass and safety Sean Davis put his black helmet on the left white “1” on Peoples-Jones’ jersey. He dropped the ball and lay on the ground for a couple of minutes. He was wobbly when he got up and was helped off the field and straight to the locker room.

“They asked me if I knew where I was at …,” he tweeted. “I said the PLAYOFFFSSSS.”

Defensive end Olivier Vernon left the game with an ankle injury in the fourth quarter and did not return. Browns coach Kevin Stefanski said Vernon is scheduled for an MRI today.

Earlier in the game, Vernon recorded his ninth sack of the season, the second most of his career (11.5 in 2013).

** The Browns did have three injured players return to the lineup — right guard Wyatt Teller and linebackers Sione Takitaki and Tae Davis — after they were limited in practice during the week.

** The Browns were also without three members of their coaching staff — offensive line coach Bill Callahan, assistant line coach Scott Peters and pass game coordinator/receivers coach Chad O’Shea — who were all placed on the reserve/COVID-19 list.

Running back Nick Chubb logged another 100-yard performance Sunday, eclipsing 1,000 yards for the season during a 47-yard touchdown run in the first quarter.

“It is definitely a special moment for me, but I can’t take all the credit,” Chubb said. “The O-line does a tremendous job blocking and opening up holes. It is a team stat for me to 1,000 yards. I thank everyone for that.”

Chubb, who picked up 108 yards on 14 carries, is fourth in the NFL with 1,067 rushing yards and tied for fourth with 12 rushing touchdowns.

Chubb passed Earnest Byner (27) for seventh place on the Browns all-time rushing TDs list with No. 28, and also became the first Browns player to finish with 12 rushing TDs in a season since Leroy Kelly had 16 in 1968.

The Carolina Panthers requested permission to interview vice president of football operations Kwesi Adofo-Mensah for their general manager job, a league source confirmed to The Chronicle-Telegram. He joined the Browns this season as GM Andrew Berry’s top lieutenant.

** The Browns’ opponents are set for the 2021 season. They will face Denver, Las Vegas, Detroit, Chicago, New England, Baltimore, Pittsburgh and Cincinnati at home, while hitting the road to face the L.A. Chargers, Kansas City, Green Bay, Minnesota, Houston, Baltimore, Pittsburgh and Cincinnati. The NFL is expected to add a 17th game to the 2021 season.

** The Browns clinched their 29th playoff berth and first since 2002. The 11-5 regular-season record is the best since the team returned to Cleveland in 1999.

Notes: Jarvis Landry was shocked, upset he missed first NFL game as close contact, glad to be back for critical finale
Notes: Reinforcements needed in secondary, but Kevin Stefanski mum on return of guys on COVID-19 reserve list