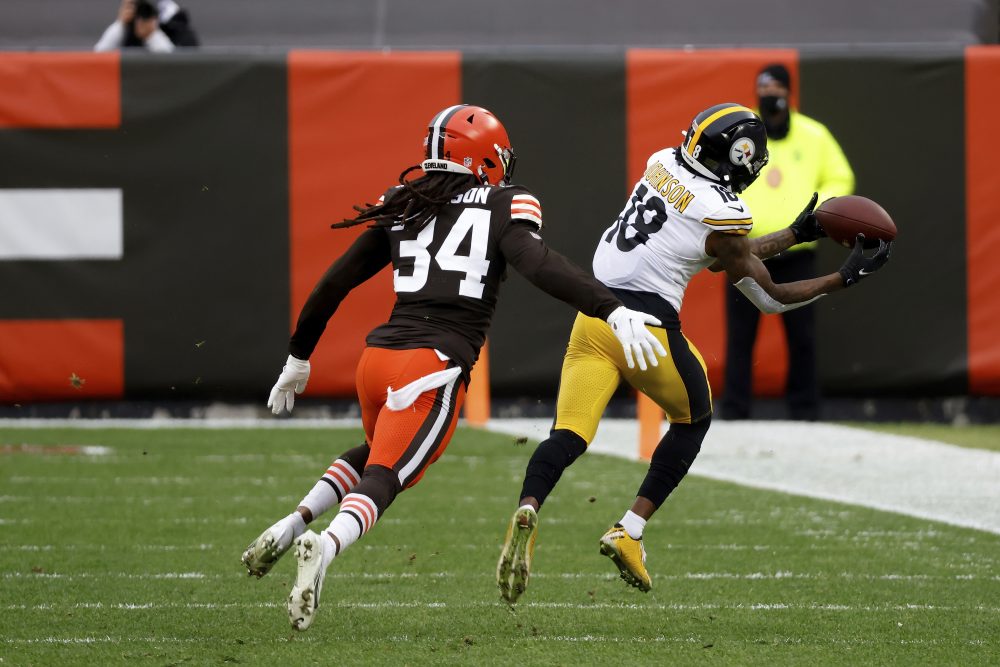 The Browns allowed 317 yards passing to the Steelers on Sunday, including three receptions of more than 40 yards. And quarterback Ben Roethlisberger had the day off.

The Browns would benefit from the return of No. 1 cornerback Denzel Ward, nickelback Kevin Johnson and free safety Andrew Sendejo — three of the top five defensive backs — for the playoff rematch in Pittsburgh on Sunday night, but there’s no guarantee they’ll be activated in time off the COVID-19 reserve list.

“With all of those guys on that COVID list, I can’t really get into specifics,” coach Kevin Stefanski said Monday. “I will just tell you that we will work through all of that, we will follow the protocols and see where they lead.”

Linebackers B.J. Goodson and Malcolm Smith and rookie tight end Harrison Bryant are also on the list after testing positive.

NFL protocols state a player who tests positive but never exhibits symptoms must isolate for 10 days beginning with the day the sample was collected. The requirements are stricter for a player who experiences symptoms, including isolating for 10 days after first reporting them, not having a fever for at least 24 hours and an improvement in other symptoms. Any return must be approved by the team’s physician with consultation from the NFL’s chief medical officer and the Infection Control for Sports.

Sendejo tested positive Tuesday and Ward on Thursday, so they would be eligible to return in time for the game if they were asymptomatic. Johnson went on the list Saturday night. If he tested positive, he’s out for Sunday. If he was a close contact, he could return if he continued to test negative.

With Ward and Johnson out, Robert Jackson made his first NFL start in place of Ward on the outside and M.J. Stewart Jr. played in the slot. Stewart had an interception of Mason Rudolph but gave up the final touchdown after Jackson had allowed a deep completion.

“Put Robert out there and he had a couple of tough matchups, but by and large he was in position,” Stefanski said. “A couple of things that we can clean up, but all of those guys, I am proud of them for stepping up to the challenge.”

The Steelers make it tough on secondaries by going with three-receiver packages that feature JuJu Smith-Schuster, Chase Claypool and Diontae Johnson.

The Browns added an option Monday by signing cornerback Brian Allen (6-foot-3, 200 pounds) to the active roster off the Bengals practice squad. He was a fifth-round pick of the Steelers in 2017 out of the University of Utah. He’s played in 17 games.

Sheldrick Redwine started at free safety in place of Sendejo but was quickly replaced by Karl Joseph.

The hope is they feel good enough to participate in virtual meetings until they’re cleared to return to practice or games.

“Feel confident that we can continue to work remotely, if you will, with the coaches,” Stefanski told reporters.

Callahan is a former head coach and has received a lot of credit for the run game and the improved performance of the line. Right tackle Jack Conklin said the veteran line can get by without Callahan at practice.

“I don’t think any of us are too worried about not having him there just because we are virtual everything now besides practice, so we are still going to get a whole lot of their technique and talking to us about the game plan and everything,” he said.

SAVE SOME FOR LATER

Stefanski was devoted to winning Sunday to ensure a playoff spot. But he acknowledged thinking about the prospect of playing the Steelers again in the first round of the playoffs.

“I knew that was a distinct possibility,” he said.

Running back Nick Chubb rushed 14 times for 108 yards and a touchdown and played only 27 of 62 offensive snaps. Kareem Hunt played 35 snaps, rushing 10 times for 37 yards.

“We are mindful of workload and mindful of getting that win and also understanding that we have another hopefully a few games coming up here,” Stefanski said. “Try to make sure it is the right balance of keeping both those guys fresh and getting the guy in there to get some work done.

“We feel like we want to make sure we have some fresh guys starting this week.”

The coaching staff has stressed all year the advantage of keeping both backs rested. It allows them to run hard whenever they’re in the game and wear down defenses with the 1-2 punch.

“My body is feeling good,” Hunt said. “Nick has been doing a great job of taking the load off me and I have been trying to take the load off him just as much. It is great.”

Defensive end Myles Garrett approached Rudolph after the game and complimented him on his performance. It was the first time they’d talked since their infamous on-field altercation in 2019.

“It is big,” defensive tackle Larry Ogunjobi said. “It speaks to his maturity and his character as a person. Never one time throughout the whole situation did I doubt the person Myles was. For him to kind of extend that arm out and kind of just squash it was big for everybody.”

Hunt was the lead blocker on Baker Mayfield’s 3-yard keeper that sealed the victory, drilling the defender and driving him back.

“That is the thing about me: Whatever I can do to help the team win, I am going to do it,” Hunt said. “I knew Bake was going to be behind me so I was going to make sure my man was taken good care of so he can get the first down. It is just who wants it more. I really wanted to win that game.”

Rookie receiver Donovan Peoples-Jones sustained a concussion Sunday and is in the league’s protocol.

** The AFC North is the first division with three teams with at least 11 wins since realignment in 2002. The Browns finished third behind the Steelers (12-4) and Ravens (11-5), who swept the Browns.

** Stefanski said without Callahan center JC Tretter helped on the sideline like he always does but wasn’t a “Bill Russell player-coach.”