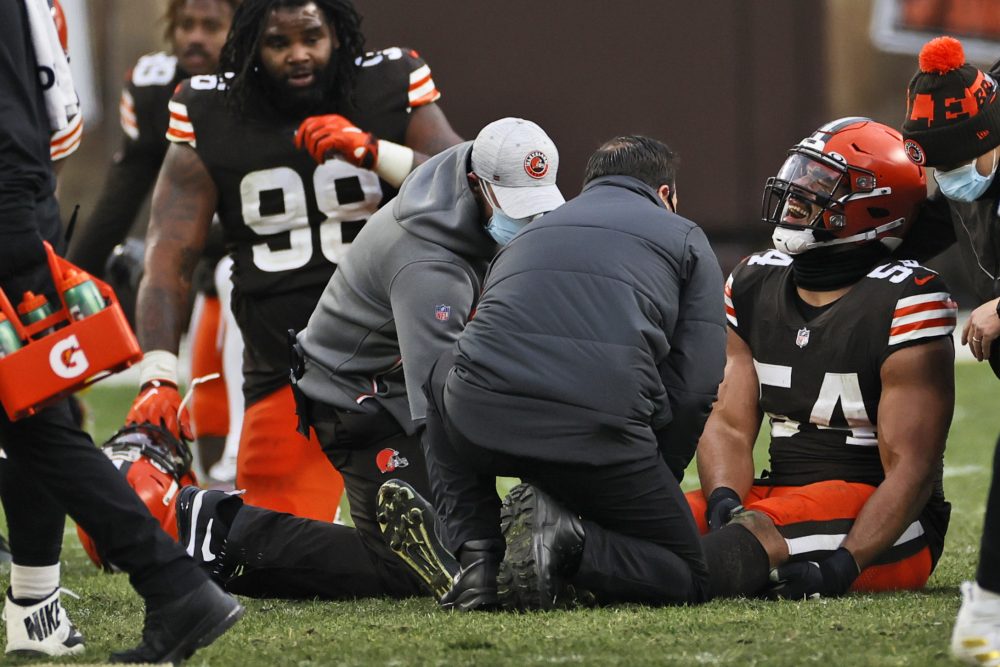 The Browns will make their first playoff appearance since 2002 without their hottest defensive lineman.

End Olivier Vernon’s Achilles tendon ruptured Sunday in the 24-22 win over the Steelers that earned the Browns a postseason rematch Sunday night in Pittsburgh.

“Obviously I’m very disappointed for OV,” he said. “Was playing at a high level. We’re going to miss his leadership.”

Adrian Clayborn is expected to take Vernon’s place in the starting lineup, and Porter Gustin will also get more playing time.

Vernon was second to end Myles Garrett with nine sacks, five coming in the last five weeks. He’s also a force in the run game, setting the edge on the perimeter.

“I am hurting for my dawg right now,” defensive tackle Larry Ogunjobi said. “That is big brother. Hurting extremely for him. Praying for him. He is in high spirits.

“He has been a major, major contributor to what we have done this season and helped us win a lot of big games. I can attest to how important his pieces were for this. It is hard, but we have that next man up mentality.”

Vernon picked up his game when Garrett was out for two games with COVID-19 and finished with 36 tackles, 16 quarterback hits, 12 tackles for loss, a safety, a fumble recovery and three passes defensed in 14 games.

“We were counting on him, we needed him and he stepped up,” Stefanski said. “He’s a leader for the football team in how he plays. OV doesn’t say much, but when he talks, I think the guys listen. But just goes about his business.

“Hard to replace. I don’t know if you replace any player, but we need guys to step up.”

Vernon’s in the last year of his contract after being acquired from the Giants in a March 2019 trade. He restructured the 2020 salary in the offseason and earned $11 million guaranteed.

He’ll become a free agent in March during the early stages of the rehabilitation process.

Clayborn, 32, and linebacker Malcolm Smith are the only Browns who’ve won Super Bowls. Clayborn got his with the Patriots after the 2018 season.

“I think those guys are important in January, and I think Adrian’s a leader of this football team,” Stefanski said. “He doesn’t have to say much. It’s just how he prepares, how he goes about his business. He’s been there. He’s done that. So I think it’s great for our players to see a guy that even though he has that experience, he comes in every day ready to work.”

Ogunjobi, like most of the roster, is new to the playoffs. He’ll lean on Clayborn this week.

“Experience is a major factor,” Ogunjobi said. “We have a lot of good guys and older guys who have been there before and can talk us through it and kind of just tell us what to expect. The guys understand what is at stake and are ready to take on the challenge.”