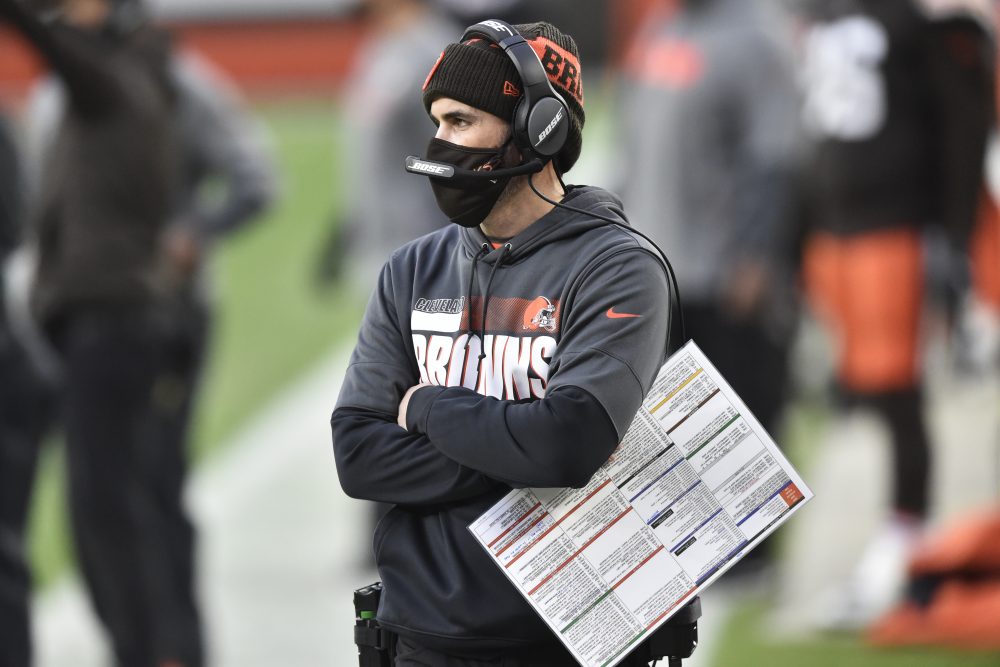 Kevin Stefanski steered the team through a tumultuous and unprecedented regular season and collected 11 wins, the most for a rookie Browns coach since Paul Brown won 12 after founding the team in 1946.

Left guard Joel Bitonio anchored the offensive line, earning a starting spot in his third straight Pro Bowl — the longest streak for a Browns guard since Hall of Famer Gene Hickerson went to six in a row from 1966-71.

Two prominent pieces in the Browns breaking the 17-season playoff drought won’t be there when the Browns take on the Steelers in the first round of the postseason Sunday night at Pittsburgh’s Heinz Field.

The news came less than 48 hours after Stefanski gave Bitonio a game ball in the locker room celebration after the 24-22 victory over the Steelers that earned the Browns a playoff berth.

The team’s chances of winning in Pittsburgh for the first time since 2003 took a hit without a pass thrown or a tackle made. Players and coaches will be thrust into roles they haven’t held this year.

“Nothing could stop what God has planned for us,” linebacker Mack Wilson tweeted. “Prayers to our Coaches and teammates. We all we got!”

The outbreak is by far the largest for a single day for the organization and continues a string of positive tests over the last two weeks. The facility in Berea was closed as contact tracing was conducted and continued into the evening, and Tretter expected it to remain closed Wednesday when the practice week was supposed to start.

The facility was closed for all or part of five straight days last week.

The game Sunday remained on as scheduled, a league spokesman told The Chronicle-Telegram.

Stefanski, a top candidate for NFL Coach of the Year, was feeling fine and worked from home as the coaches constructed the game plan, a league source said. He’ll be able to participate in virtual meetings all week but can’t help Sunday night.

“He’s done an incredible job as a first-time, first-year head coach stepping in and leading us into the playoffs,” Tretter said. “So another huge loss for us, and I feel for him as a person and as a leader not being able to be out there with us and go into battle.”

The situation with the players is just as severe. Nine, including two on the practice squad, have tested positive in the last two weeks.

Cornerbacks Denzel Ward and Kevin Johnson, linebackers B.J. Goodson and Malcolm Smith, free safety Andrew Sendejo and rookie tight end Harrison Bryant didn’t play against the Steelers, and all but Johnson were confirmed to have tested positive. Their availability for Sunday remains unsettled.

Bitonio and Hodge will definitely be out after being placed on the COVID-19 reserve list. Bitonio is the longest-tenured member of the team after being drafted in the second round in 2014. Hodge is part of the receivers rotation and a key piece on special teams.

The Bitonio news hit hard. He’s one of the most liked players on the team and had worked his entire career, which included 1-15 and 0-16 seasons in 2016 and ’17, with the hopes of playing for a winner in Cleveland.

“I talked to Joel quite a bit today,” said Tretter, who’s played every snap next to Bitonio since joining the team in 2017. “I feel for him. obviously with what he’s gone through, what he’s endured over his career and finally finding that success for the first time and then it being taken away at the last second, where he won’t be able to be out there on Sunday.

“And it is extremely difficult, extremely tough. It’s tough because he, first off, loves playing football, loves the Cleveland Browns and this is just a terrible scenario for him and for everybody involved.”

The Browns didn’t have a positive test during the season until November, then had a handful before going three weeks without another. Then started the string that hasn’t stopped. Stefanski had emphasized the importance of protocols throughout the season but still tested positive — at a highly inopportune time.

“I think what this proves is guys, even when doing all the right things, this virus is so contagious that it doesn’t guarantee you full protection,” Tretter said.

Contact tracing continued Tuesday night as the Browns hoped no high-risk close contacts would be identified. The organization will be on edge all week as it tries to get as many healthy and available coaches and players to the game as possible.

Tretter’s first thoughts were of the people affected.

“I feel for my teammates and coaches first off as human beings,” said Tretter, president of the union. “And their safety and their health and their families’ health and making sure that they are OK and fighting this virus well and making it through.

“We obviously have more work to do tracing and figuring out where the virus is coming from and how to move forward and that will come. We don’t have all those answers yet.”