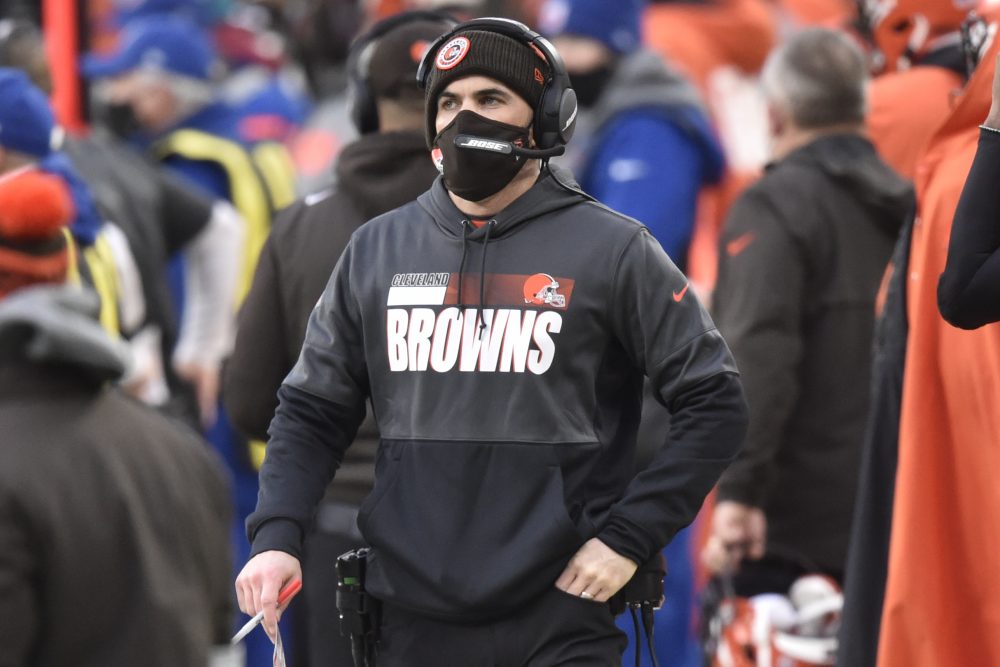 Kevin Stefanski sat at home Wednesday and Zoomed with reporters in front of a framed black-and-white picture of Jim Brown. He led morning meetings and a virtual afternoon walkthrough. He carried on as usual despite testing positive for COVID-19 on Tuesday and being ruled out for the Browns’ first playoff game in 18 years.

He’s disappointed but not deterred.

“All of our guys that can’t be a part of this is disappointing to me,” he said. “But we have to find a way, and that’s what our charge is and that’s what we’re working on today.”

Stefanski said he was feeling “fine,” didn’t know how he caught the virus, didn’t want to talk about himself and tried to put the focus back on his team and the game.

The team facility remained closed and practice was canceled, but the Browns got some good news. No one was identified as a high-risk close contact from Tuesday’s positives and no players tested positive in the results that came back Wednesday morning.

“We are full speed ahead,” Stefanski said. “Just have to put a plan together and, again, go find a way to get a win.”

The hope was to return to the field Thursday. Stefanski won’t be permitted to attend and won’t be able to help Sunday night. NFL rules prohibit communication from off-site during games and won’t change for the playoffs being held during the pandemic. The Lions played without interim coach Darrell Bevell and some assistant coaches Dec. 26 due to COVID protocols.

Special teams coordinator Mike Priefer will take the reins for practice and the game. He’s been a coordinator for 15 years and lost his only game as an interim coach with the Vikings in 2016 when Mike Zimmer had emergency eye surgery.

“He did a great job,” said Stefanski, who was on the staff. “With Coach Priefer it always makes sense, the special teams coordinator deals with everybody on the team, coaches every player. So I think it’s a very natural place to go in an interim setting where he can not miss a beat and then you let the offensive and defensive coaches focus on their side of the ball.

“Ton of confidence in Coach Priefer, he knows this team very, very well from a roster standpoint but also based on how we play.”

The Browns (11-5) showed their resilience all season as they dealt with COVID restrictions, adjustments and roster losses, as well as injuries to key players. Stefanski rallied the team through it all and kept it focused.

“This team is not my image. It is the Cleveland Browns,” he said. “We have established an identity. We did it back in the spring. We told the guys how we were going to play. We made sure that we brought players in here that fit that mold, and I think the guys understand perfectly how we play and how we win. It does not change, regardless of who is on the sideline.”

Stefanski said the Browns are used to clearing obstacles, no matter how unusual.

“I could just tell you that the team at every corner has taken on these challenges, whatever it has been,” he said. “We have had weeks where we do not practice very much, and we have had weeks where we were without players or without a coach. That is just the nature of the beast this season. I think it speaks to the team’s resilience that they are going to get their job done no matter what.”

He again conveyed the message to players while talking to them over the last couple of days.

“They understand that we have a job to do, and they are excited to do that,” Stefanski said. “They know that this thing is not stopping for me or anybody so they are full speed ahead.”

The stiff upper lip relaxed enough to admit the frustration of finding out he tested positive after many months of a dedication to following strict protocols.

“It is frustrating,” he said. “We have tried to go above and beyond and tried to do the right things. We are going to continue to do that. You really have to double down on the protocols, trust in the protocols and make sure that everybody’s safety is priority No. 1.

“Any time where you are trying to follow the rules and you lose guys, it is obviously frustrating,” he said.

Stefanski has a good relationship with Steelers coach Mike Tomlin. They spent 2006 together on the Vikings staff and caught up before the game Sunday.

“We do not know how much of a difference it is going to make,” Tomlin said of Stefanski’s absence Sunday. “That is going to be discovered in stadium.