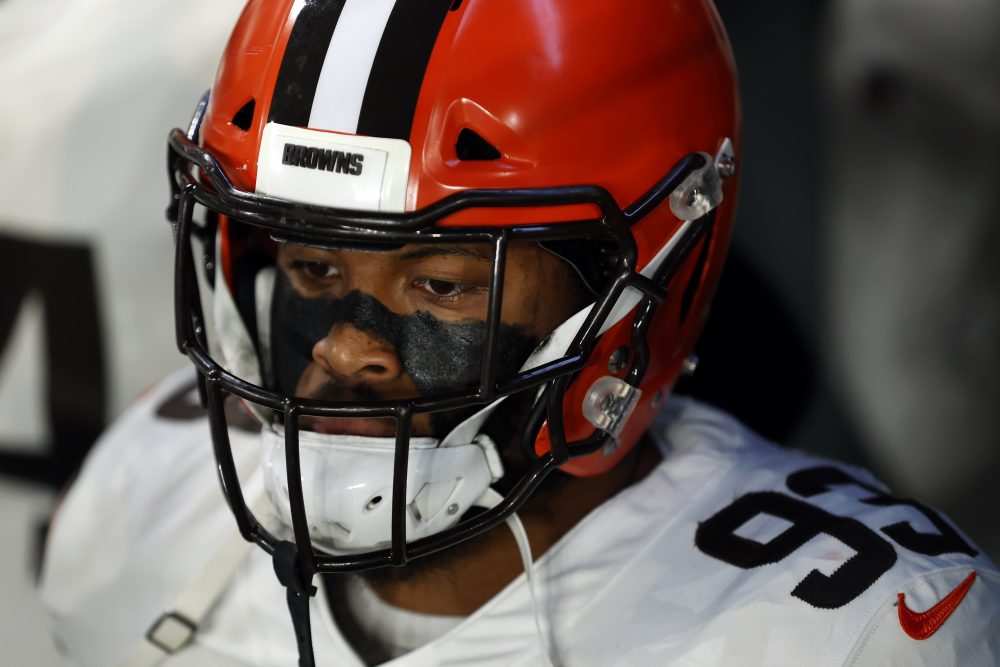 Goodson tested positive Dec. 26 and missed the last two regular-season games. He’s back in time for the first round of the playoffs.

Goodson was one of six players who missed the 23-16 loss to the Jets on Dec. 27. Receivers Jarvis Landry, Rashard Higgins, Donovan Peoples-Jones and KhaDarel Hodge and linebacker Jacob Phillips were placed on the COVID-19 list as high-risk close contacts to Goodson after spending time together in the team facility’s recovery area that includes a hot tub and cold tub.

Peoples-Jones remained in the concussion protocol and wouldn’t have practiced if the Browns held one — the building remained closed — but Stefanski didn’t rule him out for Sunday.

With Hodge out, the Browns could certainly use Peoples-Jones as the No. 3 receiver. If he can’t go, the coaches will have to decide among running back Kareem Hunt, little-used receivers Ja’Marcus Bradley and Marvin Hall or a tight end.

“We will see how Donovan continues to come through this protocol, and we have options there,” Stefanski said. “Obviously Kareem is an option.”

** Stefanski wasn’t ready to commit to Bitonio’s replacement at left guard. Michael Dunn and tackle Kendall Lamm seem the likeliest options, and Lamm was expected to practice fully after missing last week with an illness.

“We have some options there, but we are going to work through it,” Stefanski said. “Obviously I want to get on the practice field first.”

He felt horrible for Bitonio, who won’t be able to play in his first playoff game.

The COVID issues this week prompted some to question the NFL’s decision not to have local bubbles for its teams. Center and NFL Players Association president JC Tretter said it wasn’t practical and wouldn’t have prevented the outbreak.

“The voluntary bubble still has the same dependency on personal accountability that our protocols currently have,” he said Tuesday. “So you’re still relying on everybody to make the right decisions away from the facility.”

The NBA bubble worked because everyone isolated before coming together to ensure its safety. The NFL didn’t consider that option, so Tretter dismissed the effectiveness of a playoff bubble.

“If you track the tests today, if we play out the bubble scenario where we bubble up after our game on Sunday, those five guys that tested positive today, they would have turned positive inside of the bubble,” he said. “And one of the reasons why we close down the facilities is to make sure that we all are not together. So I would argue if we bubbled up, with everything we know now and we brought everybody together under the same roof, now we have five people turning positive inside the bubble and I think that makes us more susceptible to negative outcomes than separating ourselves living away from each other and keeping as much distance as possible.”

Receiver Jarvis Landry was moved to go to Twitter while watching the horrific events at the Capitol.

“Glaring Difference Between A Peaceful Protest And This!!!!!” he tweeted. “I Couldn’t imagine How Many Of Our People Would Be Hurt By Now

“We Wouldn’t Have Even Made It Down The Street!!!!”

Stefanski opened his interview by congratulating former linebacker Clay Matthews Jr. on being named a finalist for the Pro Football Hall of Fame. The Browns Legend became a finalist for the first time Tuesday in his 20th year of eligibility.

“Obviously well-deserved, so pulling for him,” Stefanski said.