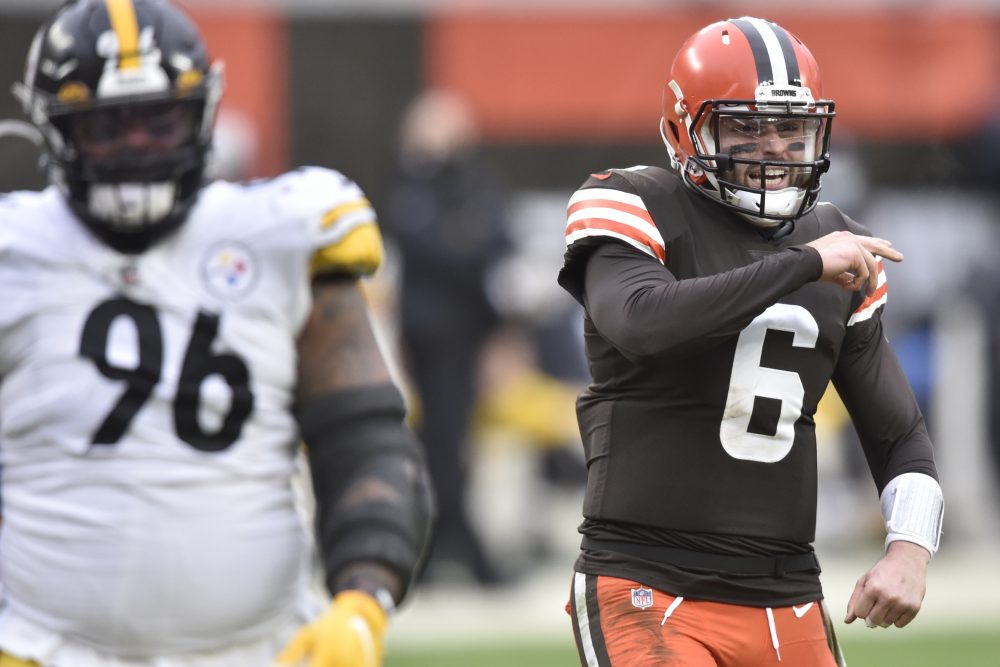 Baker Mayfield has thrown a football for much of his life. It’s what he does for a living.

He hadn’t done it this week, the most important in his NFL career.

The Browns didn’t practice for the second straight day Thursday as the team facility remained closed in the midst of a two-week string of COVID-19 cases, and Mayfield told reporters he hadn’t thrown a ball since Sunday in the 24-22 win over the Steelers.

The Browns hope to be able to practice Friday and Saturday, but the NFL hasn’t given permission while keeping the game on schedule for Sunday night in Pittsburgh.

“It will not have an impact,” Mayfield said. “There are no excuses.”

He found a silver lining in that the Browns played the Steelers last week so the familiarity level is high. His excitement hasn’t waned and his mindset hasn’t changed after coach Kevin Stefanski, two assistant coaches and three players on the active roster tested positive this week, including safety Ronnie Harrison on Thursday.

“All we wanted was a chance, and we got it,” Mayfield said. “It was not ideal of us having to win the Week 17 game to get in, but we are in. Once you are in the dance, anything can happen. However or whatever it takes to get a W on Sunday night, that is what our team is going to be ready to do.

“It means so much to the city. Feeling that energy and that atmosphere is extremely special. We can’t win the Super Bowl Sunday night. It is just the next step of potentially getting to that ultimate goal that everybody sets before the season starts.”

Mike Priefer “honored and humbled” to be acting coach, plans to do what Kevin Stefanski would on gameday

Receiver Jarvis Landry talked to reporters after a workout at his home gym. He’d obviously prefer practice time with Mayfield but said they banked plenty of reps through the season and won’t use being limited to virtual meetings as an excuse.

“Practice is a big part of everything that we do and understanding that,” Landry said. “But then at the same time, it’s 2021, feels like 2020 still, and everything’s still so unexpected. But we’ve got to make the most out of the Zoom meetings, out of the walkthroughs that we’re doing, out of the time we have to be able to go over all of the details. Be able to go outside, stretch, do anything that you can do at your home or what you have to be able to try to get ready for this game.

“Because this game is happening. Obviously despite what we’re going through as a team, I don’t think the league looks at it as a disadvantage or anything like that. So I think for us we’ve got to just continue to prepare and get ready to play a game.”

Baltimore’s Lamar Jackson and Buffalo’s Josh Allen, drafted after Mayfield was picked No. 1 in 2018, had already been to the postseason before qualifying again this year. Mayfield will make his debut, in prime time in the anchor game of six over the weekend, knowing quarterbacks are judged and remembered by what they do in the playoffs.

“Everything and more than we have been seeing,” Landry said of what he expects. “He is our leader. I always say and I have continued to say, our team is going to go as he does.

“He has a great sense of the importance of each and every game and each and every play, and that is something that we need at that position. We have the right guy for the job.”

“It is win or go home. You have to be ready for anything,” he said. “The most important thing is taking care of the ball, communicating on the sideline and adjusting and seeing what those little wrinkles are with (the Steelers) having a lot of guys back and having new personnel.”

Mayfield made the final play to clinch the Browns’ first playoff spot since 2002, running a keeper around the right end to pick up the last, necessary first down.

“To get us there and do a great job like he has all year and to close it out there in the four-minute drive with the first down to cap it, I know he is fired up,” coordinator Alex Van Pelt said. “We did talk earlier in the week about the intensity of playoffs games and how they ratchet up with each game and with each week. I think the guys are prepared for that. A lot of these guys have not been in that situation yet so just getting them prepped for the physicality and the intensity in which the game will be played.”

Mayfield went 17-for-27 (63 percent) for 196 yards, a touchdown and a 97.1 passer rating Sunday, adding 44 yards on six rushes. The Steelers rested outside linebacker T.J. Watt and defensive lineman Cam Heyward, a pair of Pro Bowlers, and might get other defensive pieces back from the injury list.

The Browns counter with a different Mayfield than the one who threw an early pick-six in the 38-7 Week 6 loss in Pittsburgh in which he played through a cracked rib and threw for only 119 yards.

For the season Mayfield completed 62.8 percent for 3,563 yards, 26 touchdowns, eight interceptions and a 95.9 rating.

“He is playing at a high level. He has been for the second half of the season,” Van Pelt said, referring to Mayfield’s 16 touchdowns and one interception in the last nine games. “To me, the light is on and it came on during the bye week maybe, where we are coaching and now he is starting to realize what we are talking about and then you start to see the fruits of those labors and how well he can play under these different demands.

“He has really answered the bell well. He is playing as well as anybody. Hopefully that keeps moving forward. I am really proud of him because he is very coachable. He takes coaching right to the core. He tries to do everything how you want it done. He is great that way.”

Mayfield believes the team will draw inspiration from trying to win for Stefanski, left guard Joel Bitonio and the others out with COVID.

“Even more so than ever, it is going to be a very, very tight-knit group that we have to believe in each other,” Mayfield said. “We are going to Pittsburgh. It is just us versus them. It is all we have.

“We have to get it to the next week, and hopefully get those guys back.”